The concept vehicle, which will do 0 to 60 in under 2.5 seconds, has a steering wheel that will measure the driver's heart rate—and broadcast it. 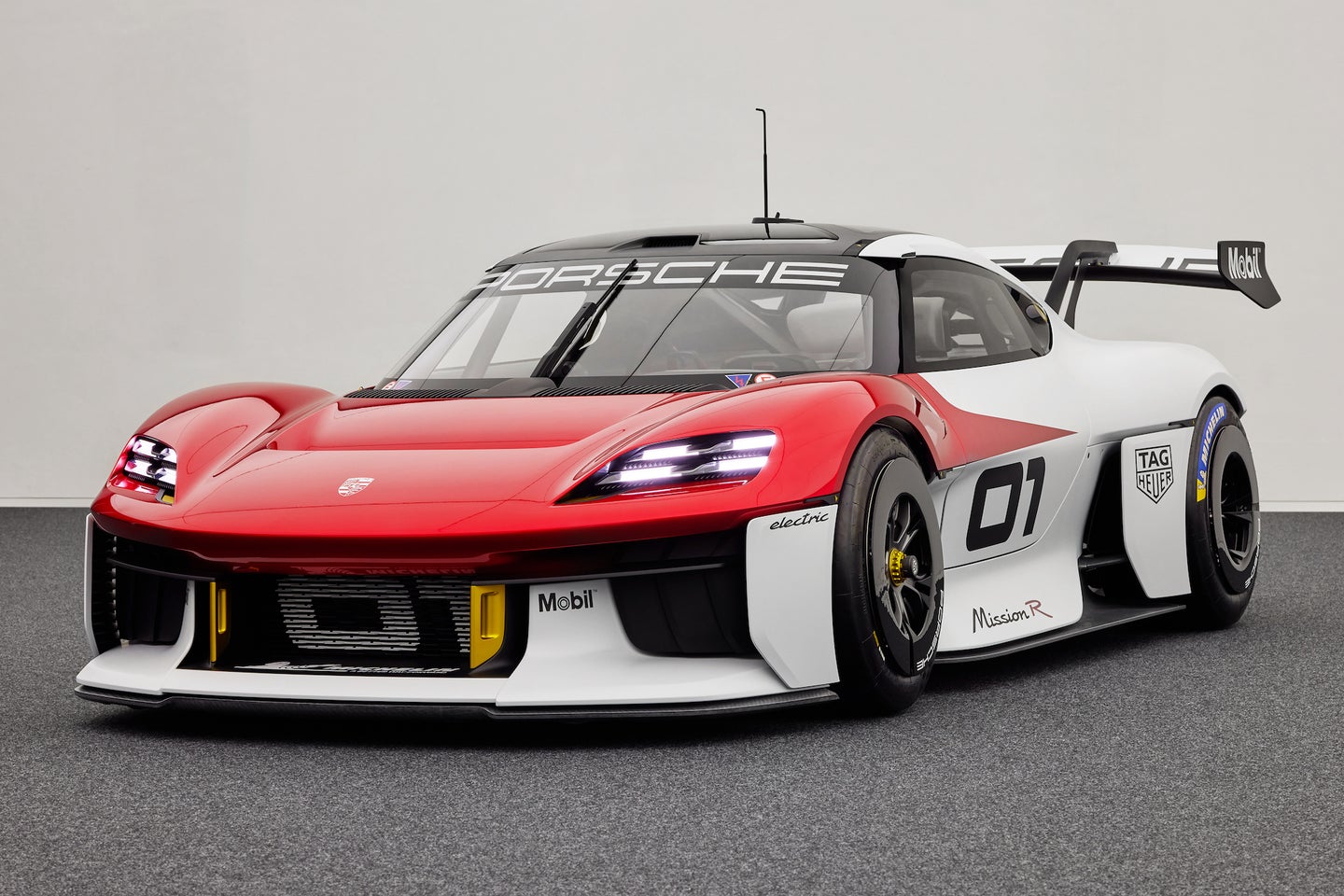 Porsche’s rich racing heritage, and the emotional connection to motorsports that comes with it, have roped in all generations of performance car lovers, whether it be for style, prestige, or simply the sound of a raw flat-six engine.

Times are changing, though. Electrification is the future of motoring, and Porsche knows that. Still, it’s committed to keeping the visceral attachment to its cars that fans have had for decades by being committed to both performance and luxury—and what better way to do that than with a true fully-electric GT racing car?

Last week at the IAA Mobility Auto Show in Munich, Porsche revealed a secret project that it has been working on for some time: the Mission R.

The race-ready concept is a preview of the spirit Porsche believes its upcoming purpose-built EV race cars will embody. (The closest analog of this battery-powered concept car is the automaker’s track-dedicated champion, the 911 GT3 Cup.) For the Mission R, that ethos begins with the two electric motors stationed at the front and rear wheels.

In Qualifying Mode, the Mission R pumps out a wicked 1,073 horsepower—that’s 429 HP at the front axle and 644 HP at the rear. This insane power helps the race car accelerate from zero to 60 miles per hour in under 2.5 seconds. And if the accelerator is kept pressed to the floor, the Mission R can reach a top speed of 186 MPH.

This extreme power is, in-part, attributed to Porsche’s all-new “permanently excited synchronous machines,” as Porsche describes its next-generation electric motors. Porsche says that the most innovative feature of these motors is the direct cooling of the stator—the stationary magnetic poles that sit along the outside of the rotors. A traditional EV cools the motor by flowing coolant through a surrounding jacket, but Porsche’s method involves flowing the coolant around the copper windings directly, which is significantly more efficient at removing heat. Combined with direct oil cooling of the battery, the combo is meant to withstand the abuse the vehicle will face on race day.

For longer periods of racing, Porsche offers a slightly less powerful Race Mode that trades total power for more sustainable output over a longer period of time. Still, 671 horsepower is enough to sprint around a track for up to 40 minutes with its large 82 kilowatt-hour battery.

When the battery is depleted, racers just need a short break to bring the car back up to a usable charge. The Mission R’s astounding 900-volt system allows the car to charge from zero to 80 percent in just 15 minutes using a 350 kW fast charger.

Porsche knew that its latest race car couldn’t just be fast—it also needed to be nimble. Batteries are often the heaviest component of an electric car, and the Mission R has no shortage of them to support a long period of racing between charges. Despite this, the Mission R tipped the scales at a lean 3,300 pounds, which is about the weight of a modern Toyota Camry. (Meanwhile, the GT3 Cup weighs in at around 2,600 pounds.)

To bring down the weight, Porsche focused on using lightweight composite materials wherever possible. Rather than a full hardened steel roll cage, the German engineers decided to use carbon fiber to form an exoskeleton that extends to the exterior of the car. Many exterior plastics were formed using Natural Fiber Reinforced Plastics (NFRP), a material sourced by using renewable flax fibers obtained from farming. Porsche says that NFRPs are even more environmentally friendly than carbon fiber since the production of the material generates 85 percent less carbon dioxide.

[RELATED: Scientists are making carbon fiber from plants instead of petroleum]

Speaking of the body, the Mission R is quite eye-catching. Its aggressive appearance is complemented by a huge spoiler and wide rear haunches, plus the exposed exoskeleton peeking from the top to form the roof itself. It also packs a quite significant amount of downforce-enhancing aerodynamics by placing dynamically actuating louvres on the front of the car, an adjustable two-section spoiler at the rear, and carbon aeroblades on the wheels.

The interior of the car is also quite a sight. Its futuristic appearance is complemented by a number of screens, dedicated buttons, and materials boldly colored in red and yellow. Exposed carbon fiber and NFRP strands are visible throughout the inside of the car as well. Plus, the 3D-printed seat is formed to the driver’s body.

Porsche believes that the future of motorsports is directly linked to esports, which means that the connection to the fans is more important than ever. To make it more personal, the automaker embedded cameras all over the Mission R. There’s a movable one on the A-pillar, a backward-facing cam on the dashboard, and on the driver’s helmet, of course. All of these cameras can even be streamed to fans via a dedicated livestream button on the steering wheel, “just like gamers would do it on platforms like Twitch,” according to Porsche.

The steering wheel, which looks to be something straight out of a racing simulator, is also connected. Biometric sensors embedded into the controls help to sense a driver’s heart rate, so when they get a rush by passing an opponent or narrowly missing a crash, that data can be translated into something visible for fans to see.

For now, the Mission R is just a concept, but it may not stay that way for long. (While it does physically exist, you can’t purchase one from Porsche.) However, it may one day lead to a future product in Porsche’s pipeline, as the company has historically turned its “Mission” cars into very real products.

The Mission E, for example, became the Porsche Taycan, and the Mission E Cross Turismo became—you guessed it—the Taycan Cross Turismo. It’s possible that the Mission R may one day become an electrified version of the 911 GT3 Cup, or perhaps bleed its tech into Porsche’s high-performance road cars in the future.