When running on battery power, the only sound was downed branches snapping under the Jeep’s tires. 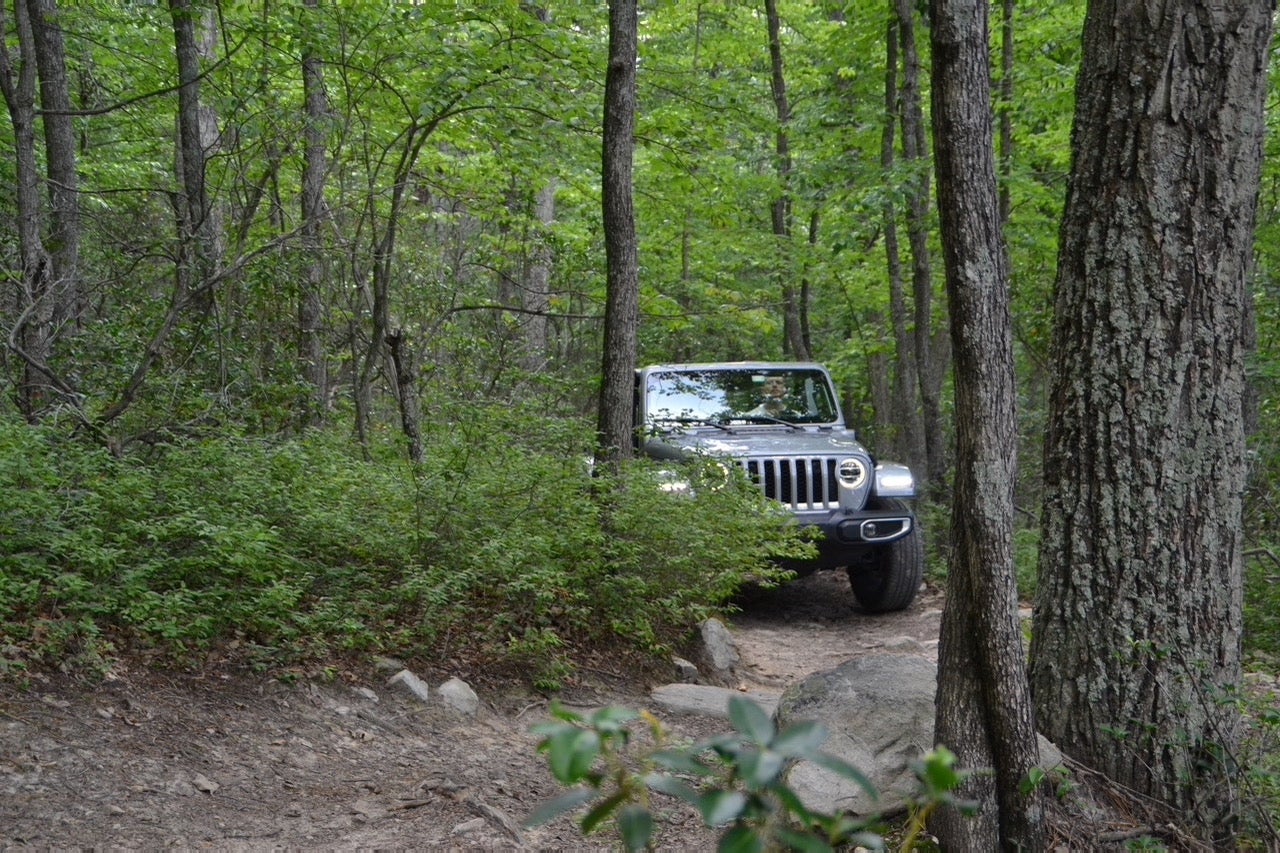 It’s rare to be able to go off-roading completely quietly, but the 2021 Jeep Wrangler Unlimited Sahara 4xe offers just that: the opportunity to take an unexpectedly meditative ride through the woods.

That’s because the Wrangler 4xe (pronounced ‘four by e’) carries a 400-volt, 17-kilowatt-hour, 96-cell battery pack amidships, which packs enough juice for about 22 miles of silent running on electric power. As a plug-in hybrid-electric vehicle, the Wrangler 4xe also has a turbocharged, direct-injected 2.0-liter four-cylinder engine that provides 370 miles of total driving range, so there’s no electric range anxiety here.

They don’t say exactly how many 4xe Wranglers they are selling, but Jeep executives do claim that this plug-in off-roader is actually the best-selling plug-in hybrid electric in the country, so it has obviously found an audience.

The hybrid’s gas motor is backed by a ZF 8-speed automatic transmission, and in place of the usual hydraulic torque converter there is an electric motor/generator that provides the Wrangler’s electric drive. Additionally, an LG Electronics 48-volt belt alternator-starter is mounted to the front of the engine; it provides the instantaneous engine stop/start function as the hybrid switches between gas and electric power.

When both the gas and electric motors are working together, they produce 375 horsepower and 470 lb.-ft. of torque. That’s 100 more horsepower than the regular four-cylinder-powered Wrangler and 85 more horsepower than the 3.6-liter V6, with torque that matches the mighty 6.4-liter Hemi V8 that is exclusively available in the Rubicon. Acceleration using the combined hybrid power is a brisk 6.0 seconds for 0-60 mph.

Off-roading in the Wrangler 4xe

With the Wrangler stripped of its roof and doors, creeping along the Tasker’s Gap off-highway vehicle trail in Virginia, the only sound was downed branches snapping under the Jeep’s Bridgestone tires. Our test vehicle was a Wrangler Sahara, which is the high-end ($47,995 base price, $56,380 as tested) model meant for suburbanites who seek some light trail-going capability for camping or hiking. The 4xe is also available in the urban-oriented High Altitude or the Rubicon maximum off-road trim levels.

Our Sahara carries Jeep’s “Trail Rated” designation, and it has some off-road goodies in support of that. Those goodies include skid plates to shield the Wrangler’s underbelly, a two-speed transfer case providing a 2.72:1 low range ratio, and legendarily tough Dana 44 front and rear differentials.

It also has off-road gadgets such as Selec-Speed Control with Hill Ascent, which is effectively trail cruise control that lets the driver focus on steering around obstacles, and Hill Descent Control, which automatically employs the drivetrain and brakes to control the vehicle’s speed descending steep and slippery inclines; the computer can brake each wheel individually.

The tires, doors, and more

The fact that it rolls on fashionable gloss black 20-inch aluminum wheels that are wrapped in low-profile Bridgestone Dueler H/L Alenza tires, which are designed for smooth and quiet highway driving and not for off-roading, had us worried about the possibility of puncturing a tire on a sharp rock. That fact made us even more cautious on the trail than usual. It worked out fine, with the Wrangler confidently scrambling up steep rocks, threading through trees, and splashing through mud.

A shorter two-door Wrangler would be easier to maneuver in the woods, though we only made a three-point turn once due to the Unlimited’s extra length. It would also be easier to wrestle the removable fiberglass hard top roof off the two-door. Our test Unlimited also had the optional $525 sound deadening, which made it even heavier and more challenging for two adults to lift off and carry.

The main section of the hardtop is secured by eight Torx head bolts, and the Wrangler comes with a compact ratchet and the correct bits for doing the work. The two panels above the front seat require no tools for removal and they are light enough that it is no problem to take them off and put them on quickly.

[Related: The 2021 Ford Bronco lives up to its massive hype]

The doors are also removable and doing so not only provides an immersive open-air experience when driving around town, but it also produces a huge improvement in visibility in tight quarters on the trail. Additionally, it is much easier for your spotter to jump out to provide direction over tricky spots and around rocks that menace the Wrangler’s vital organs.

It is important to note that Jeep has armored and sealed all of the 4xe system’s electrical bits as comprehensively as its mechanical parts, so the hybrid-electric version retains the same 30-inch water fording rating as the combustion-only model. We didn’t find 30 inches of water to test that rating, but we were able to splash through some large mud holes.

The process of stripping off everything that is removable requires about half an hour, a decent bit of energy, and a lot of space to store all of the removed parts.

However, while the Sahara was more comfortable on the highway drive to the trail, a Rubicon, with its 4:1 low range, locking axles, disconnectable sway bar, and off-road spec 33-inch balloon tires would have been still more capable.

Regardless, Wrangler drivers will find that they are much more relaxed on two-lane country highways at 55-ish mph than on the Interstate at 70-ish mph. There is only so much that can be done by putting car tires on a solid front axle truck, and at 70 mph, the driver is reminded of this fact by the need for corrections and by the head shake through the steering wheel in response to bumps and potholes. On-road refinement is an area of substantial advantage for Ford’s new Bronco, which has independent front suspension rather than the Wrangler’s solid axle.

Our test Wrangler was equipped with Jeep’s Advanced Safety Group option package, which includes adaptive cruise control. This works especially well with the 4xe hybrid drivetrain, because the system can precisely apply the electric motor’s torque to maintain the set speed climbing hills and employ its regenerative braking to hold the right speed on downhills.

For the highway portion, we pressed the 4xe’s ‘eSave’ button, which prioritizes the Wrangler’s gas engine, saving the battery for later use. We saved the battery pack for our two hours of off-road driving at Tasker’s Gap, where we pressed the ‘Electric’ button to keep the combustion engine dormant.

At all times, we also keep the ‘Max Regen’ button selected. This means that the Wrangler’s electric motor acts as a generator as soon as the driver lifts off the throttle pedal, providing up to 0.25 g deceleration without touching the brake pedal.

Unfortunately, this function resets to “off” every time the Wrangler’s turned off, so it is frustrating for drivers who prefer this mode to have to push the button every single time they drive it. Perhaps Jeep can revisit this in a future software update that lets the driver choose to make this selection persistent.

The 4xe drivetrain option boosts the Wrangler Sahara’s price by $8,500 over a conventionally powered model, but the federal government’s $7,500 tax rebate takes most of the sting out of that charge. Of course, if your budget is only enough for one of the lower trim levels, then stretching for the Sahara also adds to the cost.

The idea is to make up the cost difference in fuel savings. But the regular Sahara is EPA rated at 21 mpg in combined city/highway driving. We averaged 25 mpg in mixed driving with the 4xe, using electric power exclusively around town and on the trail, and gas power for the trip out to the off-road park. During that drive the trip computer reported the Wrangler was getting 18 mpg on the highway.

On electric-only power, we consistently drove a few more miles than the EPA’s racing of 22 miles of EV driving range while driving around town. On the highway, the blunt-nosed Wrangler would presumably come up a few miles short of that rating due to the increased effect of aerodynamic drag.

But the highway isn’t a Wrangler’s natural environment, even with boring street-oriented tires installed. It longs for the off-road trail. Remove all the bodywork and switch to silent electric drive and you can hear it asking to go for a quiet wander through the woods.