The iconic Lamborghini Countach has been reborn as a modern supercar

An 80s icon is back, and it brought batteries. 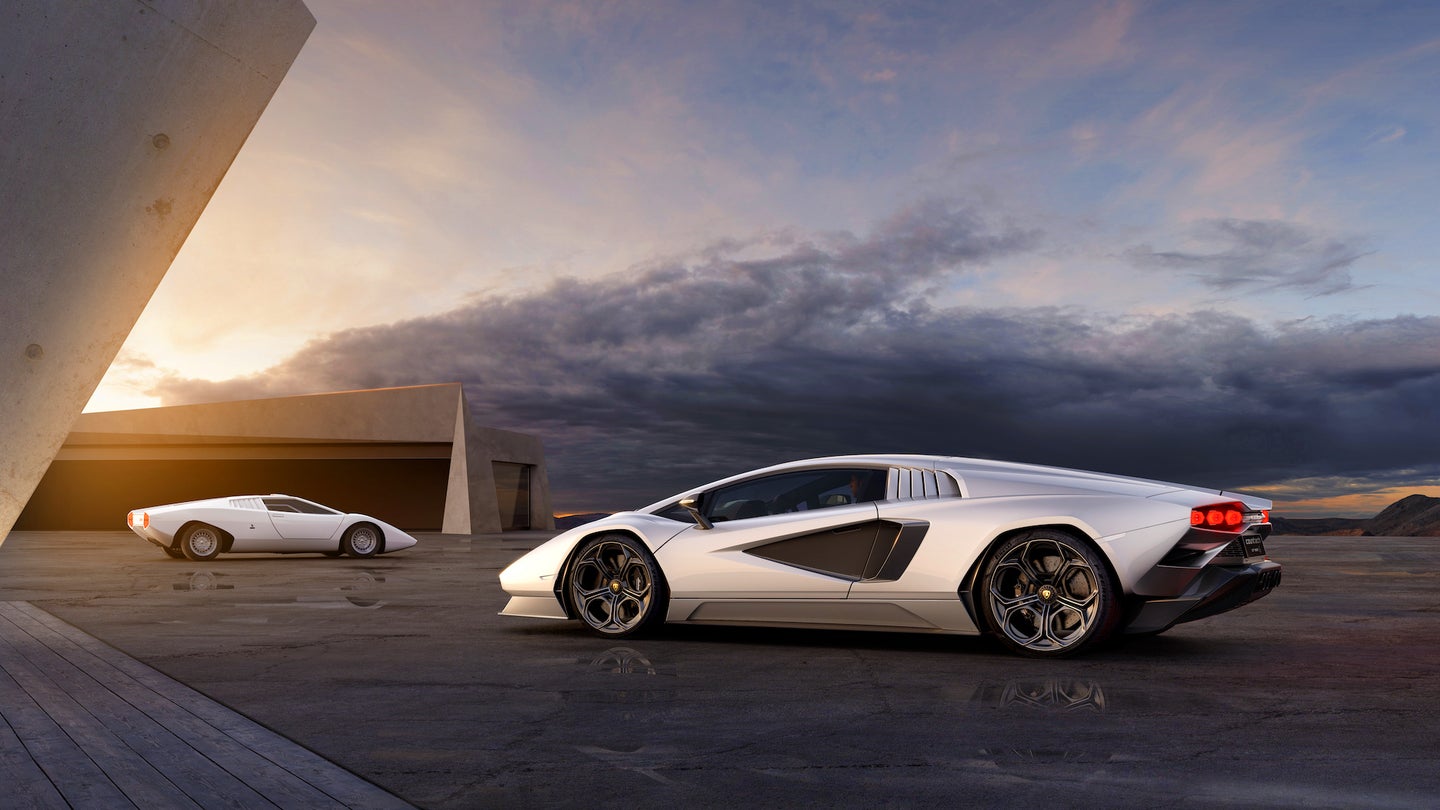 The classic Countach is perhaps the most important car ever to be made by Lamborghini. When finally approved for US sale, the car became a V12-powered sex symbol that shared the silver screen with icons like Burt Reynolds and Farrah Fawcett. It was the car that every car-crazed person spent countless hours dreaming of owning. And most importantly, it literally saved Lamborghini from financial ruin.

Thirty-one years after the last Countach rolled off the line, its maker unveiled a modern take on the original wedge-shaped supercar with more power, more tech, and sleeker lines: the Lamborghini Countach LPI 800-4.

The name may seem like a mouthful, but it’s easy to dissect when broken up into pieces. First, LPI is an acronym which means “Longitudinale Posteriore Ibrido,” or in English, “Longitudinal Posterior Hybrid.” This refers to the layout of the Countach’s humongous 6.5-liter V12 engine, which is mounted at the rear of the car and oriented so that the crankshaft aligns with the long axis of the vehicle.

The word “Hybrid” is quite literal. It’s a nod to the mild 48-volt hybrid setup plucked from the Lamborghini Sian that provides complimentary power to the combustion engine.

The electric setup found in the Countach and the Sian are rather unique. Instead of using lithium ion battery cells to store energy, the platform is equipped with modern supercapacitors. This allows the Countach’s “battery” pack to retain an energy-to-weight density three times higher than traditional chemical cells, meaning that the car can store more energy without increasing the pack’s overall weight and hindering the car’s performance. Another benefit to using supercapacitors over normal batteries is the ability to rapidly recharge, meaning that the car can more efficiently reclaim power from regenerative braking to power its electric motor.

Together, both the combustion engine and the Countach’s hybrid system produce 802 horsepower—769 HP from the venerable V12 and 33 HP from the electric motor—which is rounded-down to “800” to simplify the car’s name.

The 12-cylinder is rather important to the Countach’s heritage. Lamborghini knew this, and ensured that the car not only had all 12-cylinders, but also sounded and felt the part. In order to keep the V12 feeling pure, the hybrid motor was integrated with the gearbox in order to create a direct connection between the wheels and the electric motor. It can aid in bursts of power without feeling artificial, or it can help maneuver the vehicle at low speeds.

The final number, “4”, plainly refers to how the car puts the power to the ground: at all four wheels.

From a stop, the 3,516-pound Countach can sprint from zero to 60 miles per hour in under three seconds. Feeling a bit feisty? Keep the pedal mashed and it will hit 124 MPH within nine seconds and continue to pull all the way to an eye-watering 221 MPH.

And it does this while looking rather stylish. Despite sharing a chassis with the Aventador, the Countach has a retro-inspired style all of its own. From the pointed nose with squinty headlights to the upwards-sloping tail with a Periscopio-inspired hatch, there are many styling cues directly taken from the original supercar, though dulled ever so slightly for a more modern appeal.

Just don’t call it “retrospective,” because according to CEO Stephan Winkelmann, the car is all about “looking forward” into Lamborghini’s future rather than being stuck in the past. But a little bit of homage and nostalgia is okay.

As for a price, the Italian supercar maker hasn’t yet revealed an official number just yet. And yet, all 112 examples of the Countach that it plans to build are said to have already been sold.

It’s not uncommon for a luxury performance car company like Lamborghini to offer its most coveted special editions to previous buyers before offering the cars to the public, which is more than likely what happened here. Sadly, that means the only way to buy one, at least for now, will be second-hand.