Kranthi Kiran Vistakula developed technology that can keep your body comfortable in outside temperatures that range from -50 to 50 degrees Celsius. 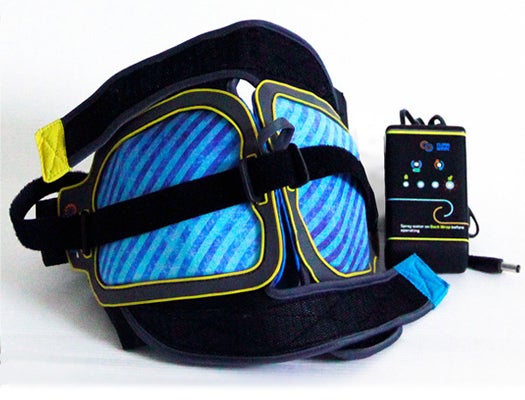 With the exception of Russian novelists, not many people can say their big break was inspired by the despair of a frost-ridden, snot-icicle-inducing winter. Yet for Kranthi Kiran Vistakula, a graduate student from Hyderabad, India, the inconvenience of the Boston cold wasn’t something to shrug at — it was a problem to fix.

While working toward a master’s degree in biomedical engineering at the Massachusetts Institute of Technology, he grew increasingly annoyed by the cyclical struggle of piling on layers of clothing to combat the frigid cold on his walk to class, only to break into a sweat and peel them off the minute he stepped inside an overheated building.

To make himself more comfortable, he invented what would become ClimaCon technology, a lightweight, wearable system that can heat and cool on demand. Seven years later, his idea has gone through around 250 iterations and expanded from winter outerwear with possible military applications to coasters to keep your coffee warm, wraps that can be used in medical therapy, and maybe even a new air conditioning system for your car. Along the way, he’s received an unusually large boost in funding and support from the Indian government. With technology his professors told him was thermodynamically impossible, he’s now poised to capture a chunk of the U.S. market after debuting at this year’s Consumer Electronics Show.

While still at MIT, Vistakula, now 33, was set on developing a jacket that could keep the wearer’s body temperature at a comfortable level even when the outside temperature varied. His professors were skeptical when he told them he wanted to design a climate-controlling jacket that weighed only a little more than a pound. When he wore an early version to class, a 10-pound model equipped with heavy fans and wires, people looked at him like he was crazy. The jacket used a thermoelectric principle called the Peltier effect: when an electric current flows through two different metals connected to each other, one will become hot and the other cold. 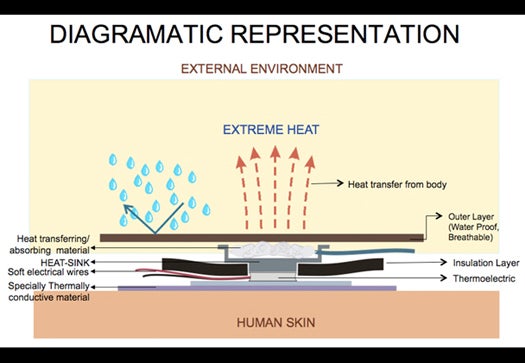 To bring down the weight, he ditched the fans in favor of nanotechnology. He began designing ClimaCon, a patented nanotech-based cooling system based on the Peltier effect that dissipates heat without a fan, either toward your body (to keep you warm) or away from your body (to cool you off). He made a jacket with 16 small thermoelectric plates that could be arranged near large muscle groups, where blood flow and heat concentration are high. With an article of clothing no heavier than a pair of jeans, he could keep his body comfortable in outside temperatures that ranged from -50 to 50 degrees Celsius.

Even in its early stages, the product held enough promise that Vistakula put his studies on hold to pursue a startup full-time, leaving MIT only a year and a half into his degree. He had always wanted to be an entrepreneur, and he had already successfully won $3,000 in startup money from MIT business plan competitions with ClimaCon. Because he couldn’t found a U.S. company on his student visa he left Cambridge in 2008 to return to India and found Dhama Innovations, where he would begin refining the technology necessary to make ClimaCon commercially viable.

“I always knew heating and cooling would have a lot of applications,” he says of his initial product. “The jacket was one immediate application a lot of people liked.” One initial expansion of the idea involved designing a cooling system for Russian-made missiles that don’t function properly in India’s intense heat, but the prototype didn’t progress far.

At a time when entrepreneurship was still “very new to India,” Vistakula applied for seed funding from the Department of Scientific and Industrial Research through their Technopreneur Promotion Programme, where jury member Mahesh Krovvidi took notice of his idea.

Krovvidi, the CEO of the National Design Business Incubator at the National Institute of Design in Ahmedabad, saw potential for his newly founded mentorship program to improve Vistakula’s product. In addition to $110,000 in seed money from the Indian government, Vistakula received an invitation to join the incubator.

“I realized this technology would require a lot of design support,” Krovvidi explains. “Our incubator was in a position to partner with the designers to make his product complete and ready for market.”

In its early development at MIT, ClimaCon was a crude concept both from a technological and a design standpoint. To become market ready, Vistakula had to increase its efficiency, decrease the device’s weight and design it to better conform to the human body.

Though Vistakula had initially thought the technology would be useful to the Indian army, both in terms of all-weather clothing and to cool missiles, Krovvidi urged him to look at broader applications — for sports, outdoor adventure gear and health. 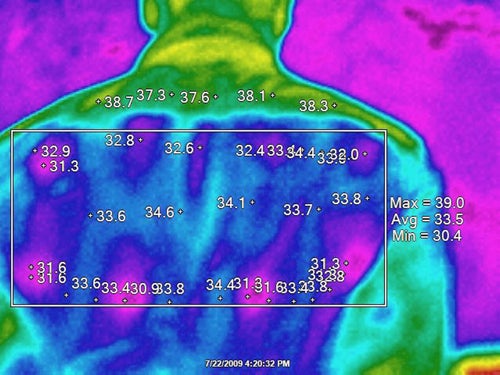 Skin temperature after using ClimaWare to cool for five minutes

The technology has the potential to be used in a wide range of consumer products, in everything from snow boots to hot plates to cars. To narrow its focus, the company decided to focus on medical heating and cooling therapy, which uses the contrast of hot and cold to increase circulation, soothe pain and promote the healing process.

ClimaCon has four cold settings and four hot settings between 38 and 140 degrees Fahrenheit, controlled by a small remote. It’s powered by cell phone batteries, and depending on the device, can run for up to four hours per charge. It can cool from room temperature to its lowest point in three seconds, and heat back up to 140 degrees Fahrenheit in 13 seconds. That makes it ideal for contrast therapy, alternating extreme temperatures to treat pain from muscle soreness and injuries. A band that can get hot and cold on-demand is far more convenient than squirming under a dripping ice pack.

According to Vistakula, the medical market in the U.S. has the advantage of high consumer awareness and already-existing distributer networks. Now roughly 80 percent of the company is devoted to the medical market.

Since his days at MIT, Vistakula and ClimaCon have continued to draw attention and gather prizes from events like the Lockheed Martin Innovator’s Award, the Intel India Innovation Pioneers Challenge and the Under Armor Innovation Challenge. In 2010, Vistakula was named MIT Technology Review‘s “Innovator of the Year.” Between government funding and prize money from business competitions (the Intel win came with $20,000), Dhama Innovations has been able to use angel investment and venture capital funding as a networking opportunity rather than a financial necessity.

After three years at the National Design Business Incubator, the five-person company had outgrown their small office space, and Vistakula relocated his headquarters to his hometown, Hyderabad, and set up an office in Boston. In January, Dhama Innovations debuted its ClimaWare Contrast Relief System — medical heating and cooling wraps to manage back, elbow, knee and head pain — at this year’s Consumer Electronics Show. The event gave Vistakula and his team — now a total of 18 people — a chance to meet distributors and make sales. VentureBeat even called them one of the event’s best startups.

The company has been selling some of its lower-end products, wraps that just provide heating, through doctors in India since April 2012. For his higher-end products, which are capable of both heating and cooling, Vistakula wants to expand to the U.S., where the medical device market is more advanced and stable. For now, Dhama Innovations has two U.S. distributors, and Vistakula hopes that the the medical contrast wraps will be freely available within a year, through healthcare channels like doctors and chiropractors as well as direct sales.

For now, ClimaWare products can also be bought individually online. Since the beginning of the year, Dhama Innovations has already sold $50,000 worth of climate-controlled products including jackets, dress shirts, warming coasters and body wraps, providing an extra source of revenue for the growing company.

Despite the years he’s spent tweaking his technology, Vistakula says for entrepreneurs, great technology isn’t really the key to a successful company. “Product positioning and product interaction — those are the key things, not the products,” he explains. Finding out what your customers really want is the challenge. “Technology is an in-house matter. It’s always under your control, whereas the customers are external factors you cannot control.” His approach to product testing seems to be working: He’s having trouble just keeping up with demand now.

Though the Indian entrepreneurship scene is growing, Vistakula is now planning on moving to California to ease Dhama Innovations’ transition into the American medical market. He may have other future applications up his sleeve as well. “I cannot do one thing and just focus on it at one time,” he explains. “I need some side projects.” One of these side projects is working with General Motors to possibly develop ClimaCon for use in car seats to cool your back and thighs. The other project he’s working on he won’t hint at, other than that it’s going to be “new and cool.” With ClimaCon, it’ll probably have the potential to be hot, too.