The Mustang Mach-E GT Performance Edition will now do 0-60 mph in just 3.5 seconds. 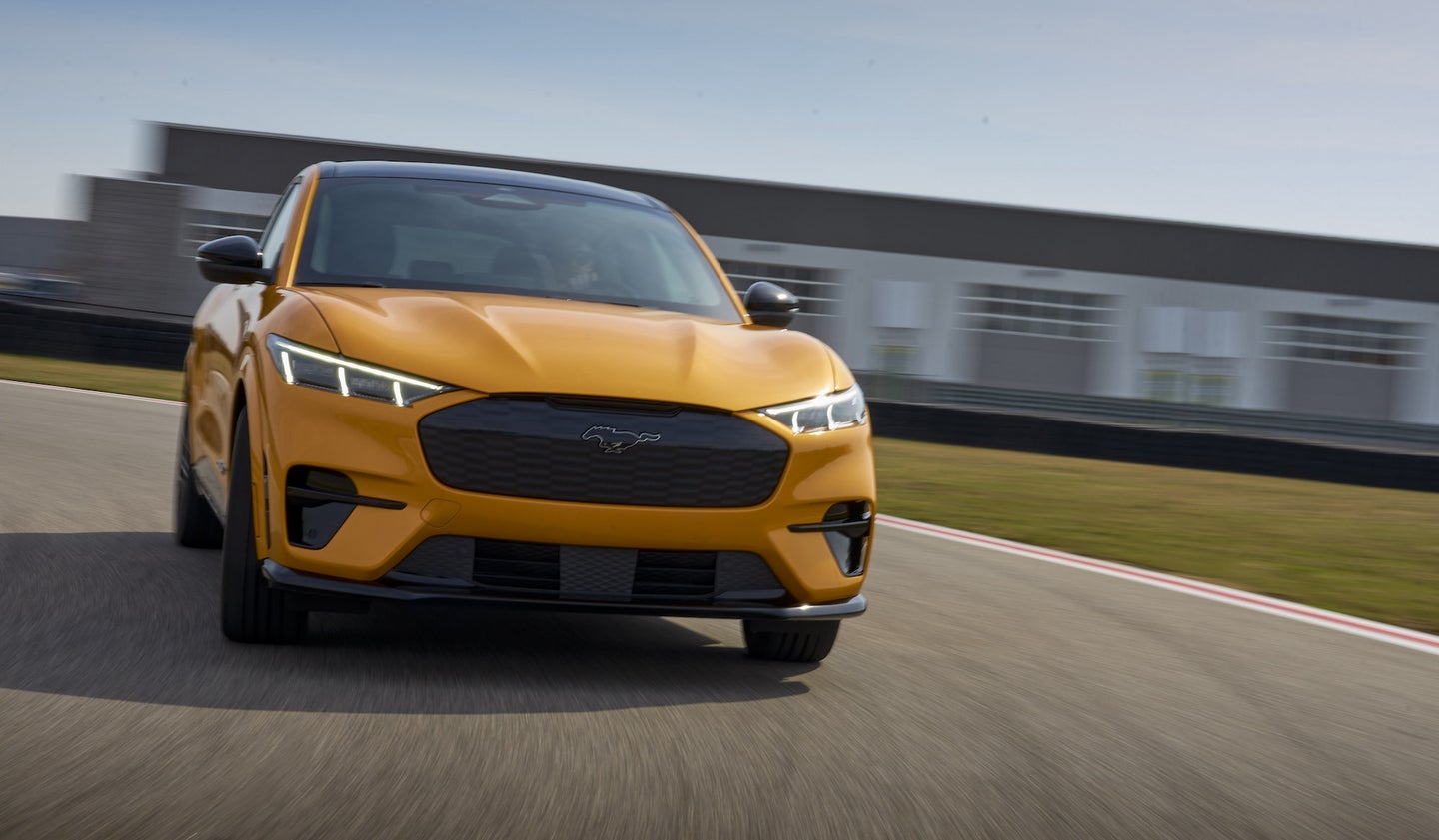 Ford’s hot new Mustang Mach-E is one of the freshest electric crossovers on dealer lots right now. Despite its only recent introduction to the market, Ford’s first modern electric car has been such a hit that the automaker has decided to offer two new amped-up performance-oriented variants.

Coined the “GT” and “GT Performance Edition,” the two trims build on the Mustang Mach-E’s already ample 346 horsepower and 428 pound-feet of torque to deliver a more exhilarating experience behind the wheel of Ford’s extended definition of a pony car.

Those eager for just a bit more punch off the line might be interested in the Mach-E GT. The variant is equipped with an upgraded front motor and includes changes to the vehicle’s software that allow for more power to be drawn from the car’s on-board battery pack. This results in an increased power output of 480 horsepower and 600 lb-ft of torque, or enough vigor to propel the 4,900-pound crossover from zero to 60 miles per hour in just 3.8 seconds, an entire second quicker than the base model.

Then there’s the more thrilling, more refined Mustang Mach-E GT Performance Edition. Laying into the accelerator pedal will result in an even quicker 0-60 MPH time of just 3.5 seconds thanks to an ever higher torque output of 634 ft-lbs.

There is a trade-off for this kind of power, however, and it comes at the expense of range. The rear-drive Mach-E with an extended battery can achieve an EPA-estimated 305 miles on a full charge, whereas the GT’s range will decrease to 250 miles. Opting for the GT Performance Edition will decrease range even further, cutting the maximum possible travel distance down to just 235 miles.

But it’s not all about speed when stepping up to the Blue Oval’s top trim. Ford also needed to ensure that the heavy crossover could stop on a dime, so it looked to high-performance braking manufacturer Brembo for help increasing the vehicle’s stopping power. Together, the companies equipped the GT Performance Edition with massive 19-inch front brakes and upgraded calipers painted in Brembo’s signature red paint. And to tie everything together are two sharp colors: Gabber Blue and Cyber Orange, which is good news for those hoping for better resale value down the road, and machined 20-inch aluminum wheels.

But the pièce de résistance of the entire GT Performance Edition package is the available MagneRide suspension which equips the Mach-E with adjustable dampers at the press of a button.

This suspension technology uses dampers filled with iron-infused synthetic oil called magnetorheological fluid. When an electromagnetic charge is applied, the fluid will adjust its viscosity to provide dynamic suspension stiffness based on the strength of the magnetic field. The result for the person behind the steering wheel is a completely customized driving experience based on the environment in which they are driving in. Sensors throughout the car provide data to determine if the suspension needs to be softer on a bumpy road for comfort, or stiffer to improve handling when taking a tight turn. The suspension will then adjust its damping and keep the driver both comfortable and in control.

The Mach-E is a monumental vehicle for Ford. Just like Lee Iacocca’s lightbulb moment with the original Ford Mustang in the early 1960s, the Mustang Mach-E—the first time the iconic car has gone electric—is meant to be the tipping point into a new era of motoring.

While this 2.5-ton four-door might not be the spitting image of a sleek sports coupe, it’s still a vehicle aimed at young buyers who refuse to compromise on an enticing driving experience. The difference here is that they also receive efficiency, interior space, and bleeding-edge technology in the form of a rather impressive crossover. All of which is exactly why Ford made the controversial decision to borrow the Mustang name for the electric crossover, even down to the “GT” appointment to signify high-output powertrains.

The new trims added to the Mach-E lineup helps to make the crossover even more competitive in a marketspace which is only in its infancy. Specifically, a performance variant helps to slot the Mustang Mach-E in a price bracket similar to other performance EV crossovers like the Tesla Model Y Performance, and are an attractive option for buyers looking to squeeze more power out of choices like the Volkswagen ID.4 and Hyundai Kona Electric.

The Mach-E GT and GT Performance are available to order now for $59,900 and $64,000, respectively, with deliveries beginning in late summer.