In Which We Discover the Nuances of Efficient Driving 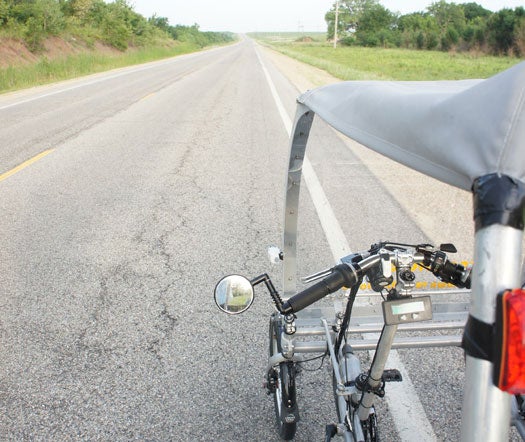 On July 1, we passed the 2,000-mile mark on our cross-country road trip. For many of those miles, we’ve been playing leapfrog with a group of touring cyclists who are also following the trans-America route, which gives us some cause for comparison. Our vehicle does, after all, have a healthy dose of bicycle in its design.

Essentially, our combination of human input (pedaling) and carefully rationed electrical power has allowed our vehicle to keep pace or in some cases outrun the cyclist – keeping in mind that the “average” rider taking on this often grueling route is not the same as the average person off the street, and if they are not an athlete at the beginning of the 4,200 mile route, they certainly get in phenomenal shaped after the first thousand miles and a few mountains. We’re also getting our fair share of exercise, but it’s become obvious that the electric motor is what makes our journey possible, as our vehicle weighs in at nearly 650 pounds when loaded with equipment and passengers – far too heavy to power up a steep grade on human effort alone, or to log some of the 100-plus mile days we’ve managed along the flatter sections of the route.

As a result, we depend on our battery pack, perhaps not quite as much as a pure electric vehicle such as the Nissan Leaf, but we certainly can’t afford to run out of juice 15 miles from the nearest town. Our electronics provide a precise picture of power consumption in relation to speed and distance, and I use this information to estimate and update our instantaneous and cumulative efficiency as we roll. The farther we travel, the better I get at achieving the optimum combination of range and speed – an important skill when you are trying to move 100 miles on the same electrical energy consumed by the average dishwasher during a single cleaning cycle.

Some of the lessons learned are the same we’ve all heard in driver’s education and countless times since. First: a fully inflated tire significantly reduces our rolling resistance. One several occaiosn, I’ve stopped mid-day to check and boost tire pressure, and can see an immediate increase of a mph or more on the same power setting. Gradual accelerations can also save quite a bit of juice. Accelerating from a dead stop to a cruise speed of 15 mph on electric power only consumes as much power as cruising for nearly a half mile, while using the pedal assist and easing up to speed cuts power needs by as much as 70 percent. These are tricks any good hyper-miler driver would practice, but there are other variables that are less obvious to automobile drivers.

Road surfaces matter: the difference between rough and smooth pavement can be as much as five percent. Even more important is the architecture of the road. Quite often, our rout would divert us from a primary two-lane highway onto a back road or farm lane. Aside from the scenery, one of the greatest differences between these types of roads is the investment in leveling. Major highways feature cuts and fills that level the surface and create more even grades. Secondary roads are more likely to follow the ups and downs of the natural terrain. When driving a car, where the slight press of the gas pedal can maintain speed, one tends to miss the subtle ups and downs of a secondary road. When working with a single horsepower of driving force, these same roads require frequent gearing changes and some slow uphill crawls. After our summer tour, I’ll go back to an automobile, the same as most Americans. When I do, it will be interesting to see if the hyper-mile skills perfected during the tour will stick and turn me into a more fuel efficient driver.