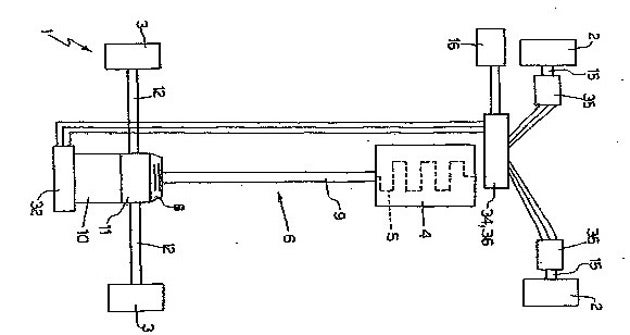 When you think of hybrid cars, the name Ferrari doesn’t spring readily to mind. In fact, the Italian sports-car builder already uses a hybrid system in its Formula One race cars, the same ones in which it finished third and fourth at this past weekend’s Monaco Grand Prix. Ferrari has also apparently filed for a patent on a new, gasoline-electric drive system for its road cars.

Automotive web site Motor Authority reports on an application the prancing-horse brand filed earlier this year with the European Patent Office for an all-wheel-drive system incorporating electric propulsion. It’s the most detail we’ve gotten yet on a mysterious system the company dubbed “Insertable 4×4” back in 2006.

A similar system in Toyota’s Highlander Hybrid puts gasoline power down at the front wheels, and electric power at the rear wheels. Ferrari’s proposed system reverses that equation, retaining its traditional setup of front (or mid-) engine and rear-wheel-drive, but adding an electric motor to power the front wheels. Ferrari’s system will be designed to heighten performance by improving traction, like the Highlander, though not necessarily to satisfy any specific green-car motives. Still, according to patent filings, it appears Ferrari’s system will allow for electric-only propulsion at slow speeds, which could improve the cars’ emissions profile in urban driving.

Ferrari’s only hybrid-drive system currently in operation powers its Formula One car. A kinetic-energy recovery, or KERS, system converts braking energy into electricity, charging a battery that powers an electric motor a driver can engage for up to 6.6 seconds per lap, delivering an 82-hp boost he can use to pass other cars. The system, developed with Italian electronics supplier Magneti Marelli, adds about 66 pounds to the company’s feather-light F1 cars. (UPDATE: F1 drivers can use the KERS system for 6.6 seconds per lap, not 20 seconds, providing a boost of 60 Kw, or 82 hp. KERS can only be used on a race car’s rear axle.)