Top Dogs: Movies May Determine Which Pups Are Most Popular 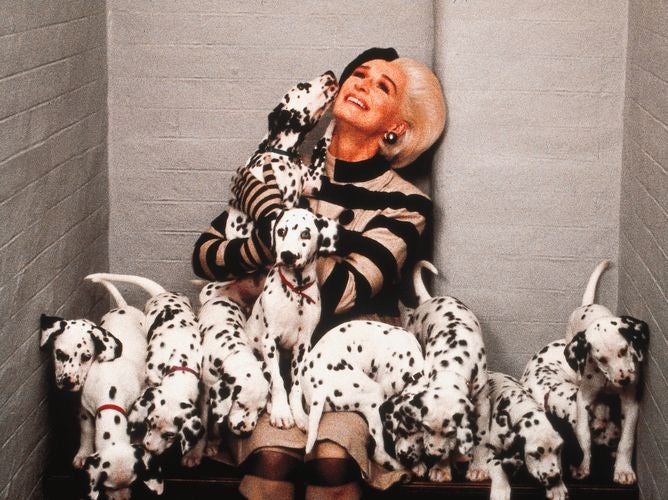 Did watching 101 Dalmatians instill you with a burning desire to fill your home with dozens of monochrome puppies? A new study suggests that may often be the case. The research suggests that all those great canine characters in films have been a prominent influence on the popularity of a breed among dog owners.

The impact of 29 films released in the United States was examined, each featuring a different dog breed. Classics such as The Wizard of Oz (1939), Lady and the Tramp (1955), The Fox and the Hound (1981) and Beethoven (1992) were all judged to have influenced people’s choice of dogs. The study traces the popularity of the featured breeds for up to ten years after the film’s release.

The authors used the records of the American Kennel Club, which has been recording the numbers of registration for each dog breed since 1927, and keeps the largest such dog registry in the world. Looking at the effect of films released between 1927 and 2005, the study shows that the number of registrations of a particular breed rose significantly following the release of a film in which the breed had been featured.

Let’s look at an obvious example. The numbers of collies rose from 2331 registered in 1943, the year when Lassie Come Home was released, to 20,006 registered a decade later. The film, which focuses on the relationship between young Joe and his beloved dog Lassie, traces faithful Lassie’s long and difficult journey back to her dear owner after being sold by his family.

The films analysed covered quite a spread of breeds. Other factors you might assume come into play when choosing a dog, such as temperament or health, seemed not to affect the scale of these trends. Alberto Acerbi, one of the authors of the study and Newton Research Fellow in the Department of Archaeology and Anthropology at the University of Bristol, said: “It seems to be pure fashion.”

A connection between the number of film views in the first weekend after its release and the rise in the popularity of the dog breed featured was observed. The study shows that earlier films generally created more widespread trends than the more recent films. The authors conjecture that this could be linked to the rise of home video, as well as the increase in the number of films released featuring dogs each year. 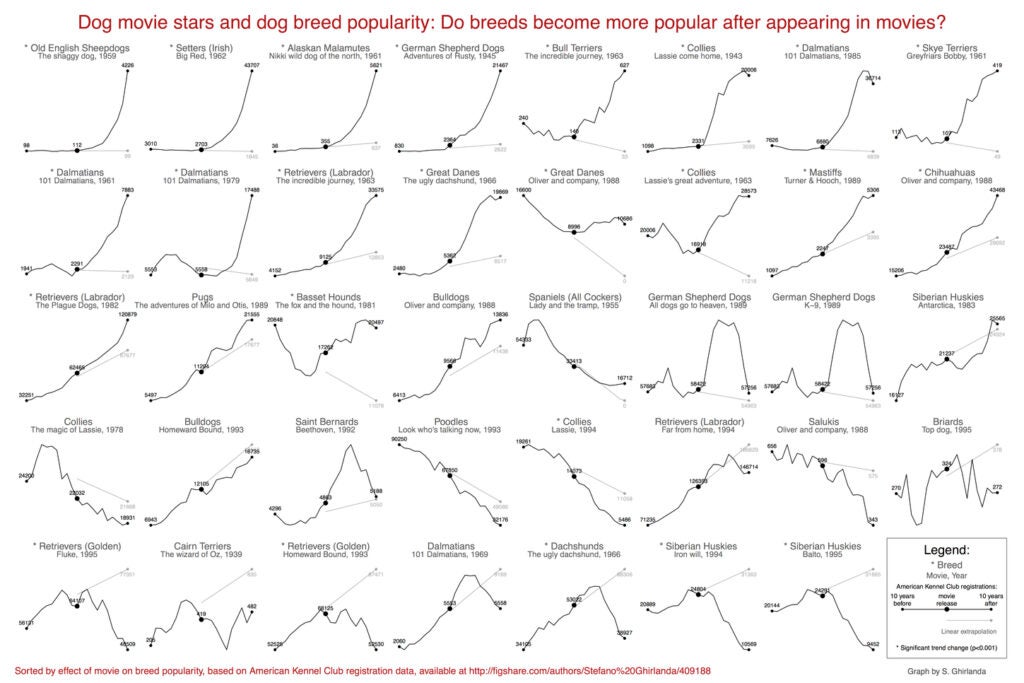 The impact of the films is perceivable, gradually, creating long-term rather than short-term trend changes. Out of the 29 examined cases, 14 show that the popularity of a breed reached its peak ten years after its feature in a film, rather than immediately following the film’s release. So apparently films are capable of influencing long-lasting preferences and inclinations in their audiences.

David Spiegelhalter, a statistician at the University of Cambridge, took a look at the research. He said:

So maybe it seems obvious that Lassie made a good name for Collies, or that children started to feel very protective over Dalmatians. But such analysis of causes and patterns behind seemingly random trends further demonstrates just how much fictional narratives influence our beliefs and actions.

“The results can be seen as representative of the general great impact of film on trends,” observes Tom van Laer, consumer researcher at ESCP Europe Business School. Indeed, a similar tendency is evident in the way numerous babies have been named after characters from the Marvel films, the Harry Potter series and television shows such as Game of Thrones and Breaking Bad.

In a recent article, van Laer writes about 76 different studies, which together show that individuals more thoroughly transported into the world of a narrative are more likely to adopt the outlooks and principles of the story.

Many of the films in which dogs play the central part are intended for children. Van Laer said that “under seven or eight years, immersion in fictional narratives is achieved more easily and thoroughly by children”. He emphasized that stories are central to children’s development and such immersions in fictional worlds in childhood have deeper and more lasting effects.

But Acerbi warns against taking the results of the paper as proof that our personal choices are to some extent always determined by the media and entertainment we consume:

Others would disagree. One political scientist recently argued that the values promoted in Harry Potter influenced the politics of its fans. So Homeward Bound may champion the values of friendship and loyalty, and 101 Dalmatians the evils of the fur trade, but be sure to be careful about watching The Ugly Dachshund with your kids unless you want a Great Dane.