This African Fish Can Catch and Eat Flying Birds

There were rumors that the African tigerfish could catch and eat flying birds, but it hadn't been proven until now. 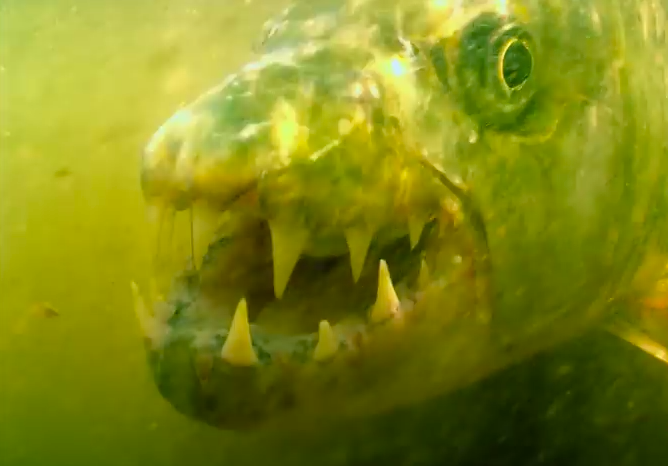 Birds sometimes eat fish. This we know. In my mind’s eye I can picture a bald eagle majestically scooping a salmon from the water. But this ain’t that. This is about fish eating flying birds.

But f_ish don’t catch birds in mid-air and eat them_, I hear you protesting. Well, nobody told that to the African tigerfish.

Nico Smit, a researcher at North-West University in Potchefstroom, South Africa, traveled to the country’s Mapungubwe National Park to study the habitat and migration of African tigerfish, a toothy little bugger that must really scare the shit out of barn swallows. And for good reason.

During Smit’s study, published this month in the Journal of Fish Biology, he and his colleagues witnessed these fish jumping out of the water and snagging barn swallows, up to 20 times. Per day. This is the first time that scientists have witnessed a freshwater fish preying upon a bird in mid-flight, according to Nature News.

Although the video quality isn’t exactly top-notch, you’ll be able to see a large fish jumping out of the water and snagging a barn swallow in the left-center of the frame.

“The whole action of jumping and catching the swallow in flight happens so incredibly quickly that after we first saw it, it took all of us a while to really fully comprehend what we had just seen,” Smit told Nature News.

These African tigerfish, or Hydrocynus vittatus (which translates to “spotted water dog,” according to the Smithsonian Channel), can grow up to more than 3 feet in length and weigh up to 22 pounds.

Thought experiment: what would happen if a tigerfish tried to eat a fish-eating bird? Or a fishing bat? I don’t claim to have an answer.