What does the red fox say?

Put your Wes Anderson notions behind you. 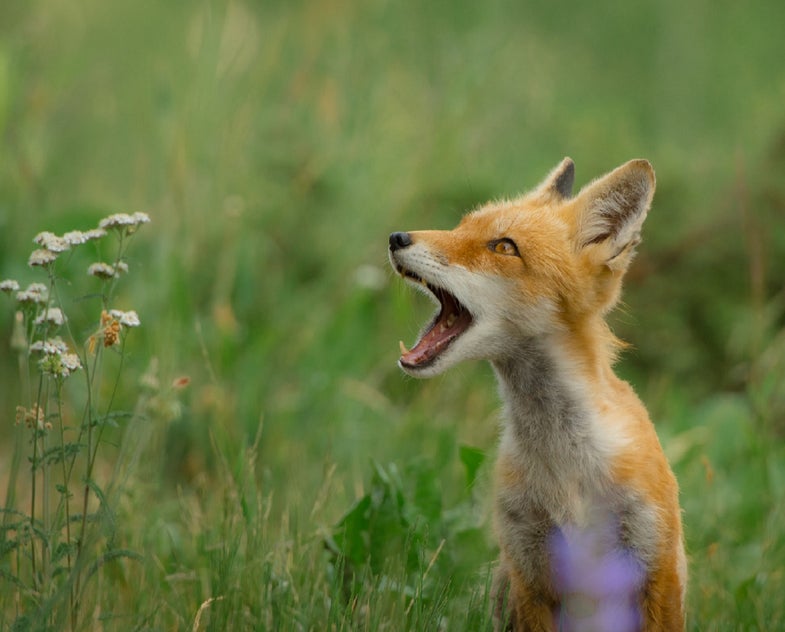 This post has been updated. It was originally published on 9/5/2013.

A 2013, a music video from a Norwegian duo called Ylvis went viral because it was catchy and weird and foreign and about animals. The lyrics are simple: Bård Ylvisåker and Vegard Ylvisåker, the folks behind Ylvis, describe the vocalizations of various common animals, from cats to dogs to ducks to cows, and then in the pre-chorus, wonder what sound the fox makes. The chorus then suggests a few possibilities, like “Gering-ding-ding-ding-dingeringeding” and “Wa-pa-pa-pa-pa-pa-pow.” Good suggestions, Bård Ylvisåker and Vegard Ylvisåker! But I think we can come up with something slightly more scientifically accurate when it comes to fox sounds, and also watch lots of animal videos while we do it.

In Norway, where Ylvis is from, there are two species of fox: the Arctic fox (Vulpes lagopus) and the red fox (Vulpes vulpes). Here in the States, we have a few others, like the gray fox and the kit fox. All species of fox have a pretty wide variety of vocalizations, just as dogs and cats do. It’s simple to reduce, say, a dog’s vocalizations to “bark,” but as any owner knows, dogs can yelp, whine, howl, growl, and make all kinds of other sounds. Are foxes dogs? They’re certainly related—but their vocalizations aren’t quite as varied.

The red fox, which is the most common species of fox worldwide (and almost certainly the fox variety Ylvis is talking about; there are only about 120 arctic foxes left in Norway), is highly vocal. Foxes are canids, like dogs and wolves, but are not closely related to either; in fact, they hunt more like cats, with a low-to-the-ground stalking posture, and bite hard with sharp, thin teeth to kill prey (dogs and wolves tend to have duller, larger teeth and use a “clamp and shake” method to kill). In vocalizations, too, foxes aren’t entirely like dogs.

The most commonly heard red fox vocalizations are a quick series of barks, and a scream-y variation on a howl. All fox vocalizations are higher-pitched than dog vocalizations, partly because foxes are much smaller. The barks are a sort of ow-wow-wow-wow, but very high-pitched, almost yippy. It’s commonly mistaken for an owl hooting. That bark sequence is thought to be an identification system; studies indicate that foxes can tell each other apart by this call.

The scream-y howl is most often heard during the breeding season, in the springtime. It is…horrible. A shrill, hoarse scream of anguish, it sounds more than anything like a human baby undergoing some kind of physical torture. It’s thought that this call is used by vixens (female foxes) to lure male foxes to them for mating, though males have been found to make this sound occasionally as well.

The bark and scream and very loud, so they’re often heard, but most other fox vocalizations are quiet and used for communication between individuals in close proximity. The most unusual is called “gekkering;” it’s a guttural chattering with occasional yelps and howls, like an ack-ack-ack-ackawoooo-ack-ack-ack. Gekkering is heard amongst adults in aggressive encounters (of which there are many; red foxes are highly territorial) and also amongst young kits playing (or play-fighting). There’s also the alarm call, which up close sounds like a cough but from afar sounds like a sharp bark, and is mostly used by fox parents to alert youngsters to danger.

Red foxes, unlike other familiar canids like the gray wolf and coyote, do not form packs. When kits are young, they and the mother may form a small family unit, but in general, foxes are solitary. Still, they sometimes inhabit the same territory, and so have a social hierarchy which requires communication. Submissive foxes, when greeting dominant foxes, will sometimes emit piercing whines, which can elevate in volume and become shrieks. Foxes communicate with kits largely with body gestures, but also make huffing and coughing noises, and sometimes brief clucks, like a casual, short form of gekkering.

That’s what sound the fox makes. But equally interesting is why most people don’t know what sound the fox makes. It’s a widespread, enormously successful and adaptive species, living worldwide, in all sorts of climates, in forests, on mountains, in suburbs and sometimes even cities. Americans and Europeans are very familiar with the red fox. And unlike, say, a raccoon, it’s a highly vocal animal. So how come we have no idea what it sounds like?

One major reason is that it’s a wild animal. The children’s toys that teach the sounds of animals focus on domestic animals, mostly livestock. Pig, cow, sheep, rooster, duck, horse—these are farm animals, which, in America’s collective agrarian past, were members of the household. You’ll notice that on some popular toys you won’t see any of the most common North American wild animals—no raccoons, no coyotes, no deer, no robins, no hawks, and no foxes. What sound does the deer make? Hell if I know.

Another reason might be that fox noises are easily mistaken for other animals. The common yow-wow-wow-wow sounds more like an owl than a canid, and the scream-howl sounds less like a fox than the soundtrack to a nightmare. And foxes are nocturnal hunters, which means we’re asleep when they’re making most of their noises.

Then there’s the other problem. Foxes are common and cute, they feature in myths and we have gone to extreme lengths to make them our pets, but the noises they make are sort of … awful. The red fox does not have a mellifluous voice; even when it’s happy, it mostly sounds like it’s being strangled. It would be awkward to teach your young child that the cow goes moo, the frog goes croak, and the fox goes YAAGGAGHHGHHHHHHAHHHH!!!!!