But even if the world's two biggest emitters meet their stated goals, will that be enough to curb climate change? 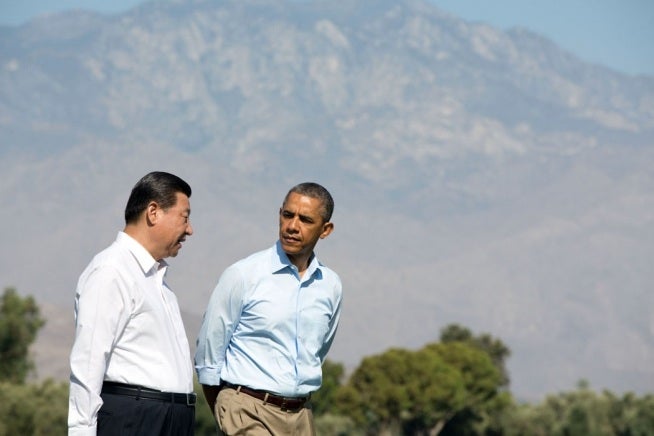 After a meeting in Beijing, the U.S. and China—the world’s top two polluters—have announced goals for reduced greenhouse gas emissions in the future.

The Los Angeles Times called the goals “dramatic,” noting that it would require the U.S. to move twice as quickly on carbon cuts as it has in the past. This is also the first time Chinese leaders have set a date for when the country’s carbon emissions will peak, the BBC reports. China has always been reluctant to promise to cut greenhouse gases because officials knew it would slow economic growth. Together, China and the U.S. account for about a third of the world’s carbon emissions.

President Barack Obama said that by 2025, the U.S. will reduce its emissions of Earth-warming gases by at least 26 percent, compared to emissions in 2005. Meanwhile, Chinese President Xi Jinping said China’s emissions would fall after 2030, but didn’t say by how much. Xi also said China would get about 20 percent of its electricity from alternative energy sources by 2030.

If the two countries do meet their goals, how much will it help with global warming? The Chinese environmental news site chinadialogue gathered expert responses to this question. In general, chinadialogue’s sources said the agreement would be helpful, but more is needed if the world wants to keep Earth’s temperatures from rising more than 2 degrees Celsius above pre-industrial levels. That two-degree target is a scientifically-informed ceiling world leaders agreed to in 2009, during the Copenhagen Accord.

Many experts urged China, the world’s top carbon emitter, to cut emissions starting in 2025, not 2030. The day before Obama and Xi made their announcement, University of Manchester climate scientist Kevin Anderson told chinadialogue that to meet the two-degree target, China and other middle-income countries “need to peak their emissions by the mid-2020s.”

Meanwhile, Anderson thinks the U.S., Europe, and other developed regions “have to eliminate fossil fuel use from their energy system early in the 2030s.” That’s an unlikely proposition. Obama’s announcement is already facing criticism at home, where the new Republican majority in the senate will likely work against this and other environmentally-minded plans from the Obama Administration.