Factory And Irrigation Technologies Have Significantly Cut U.S. Water Use

The economy and folks at home make some difference, too. In 2010, the U.S. used less water than it has in a generation, according to a new announcement from the U.S. Geological Survey.

American power plants, factories, farms, and homes used a total of 355 billion gallons of fresh and salt water a day in 2010. If you divide that amount by the U.S. population in 2010, it comes out to 1,150 gallons per person, per day. The last time the country used so little water was before 1970.

The U.S. Geological Survey credits advancements in the designs of power plants, factories, and farms’ irrigation systems for the water-use drop. Since 1970, new thermoelectric power plants have been built with more efficient cooling systems, while older plants received water-saving retrofits. Factories became more efficient and now reuse more water. Some factories also closed in the wake of the 2008 recession.

Other reasons for the water-use decline include new laws that forbid factories from drawing water from certain marine and freshwater environments, to protect the plants and animals there. Also people are much more cognizant of water-saving at home. In 2005, the average public water user went through 100 gallons of fresh water a day at home and at the office. Now he or she consumes (or flushes, or pours down the drain) 89 gallons a day. This is the first time in U.S. history that home water use has fallen. In addition to better habits, buying lower-flow shower heads, faucets, and washing machines is a big help.

So overall, it looks like a combination of new technology, new behaviors, and the United States’ shrinking economy that has made the difference.

Since 1950, U.S. water use rose consistently until 1980, after which it plateaued. (It’s notable that the U.S. underwent a severe recession in 1980, too.) Then, after 2005, water use began dropping. As you can see, the biggest water users in the U.S. have always been thermoelectric power plants and cropland. Compared to 2005, however, thermoelectric power plants in 2010 used 20 percent less water, while farms used, on average, 11 percent less water per acre of land: 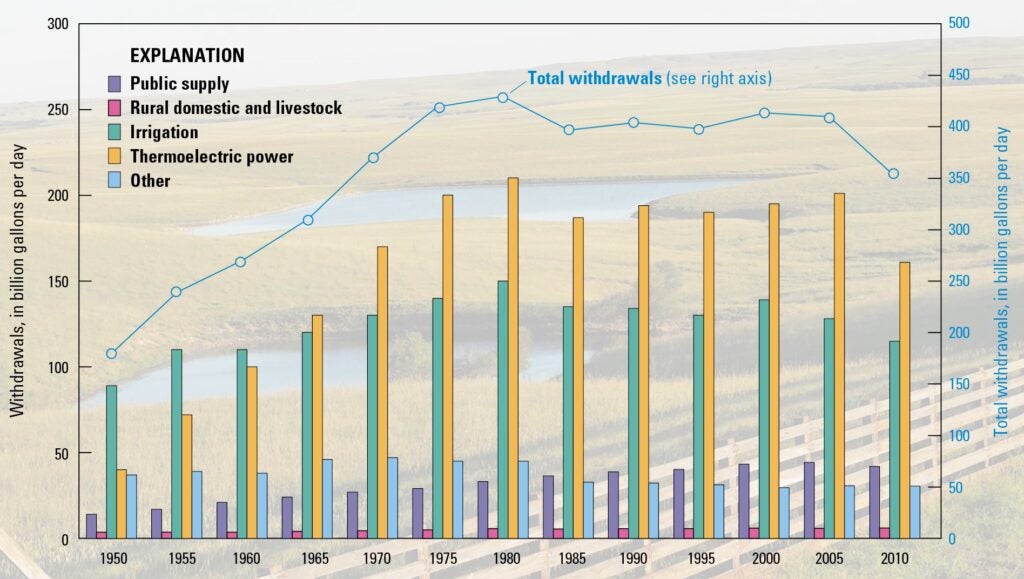 Water Use In The U.S. Over Time