Are Birds Evolving To Not Get Hit By Cars?

Shorter wings make it easier to take off quickly when a car is coming. 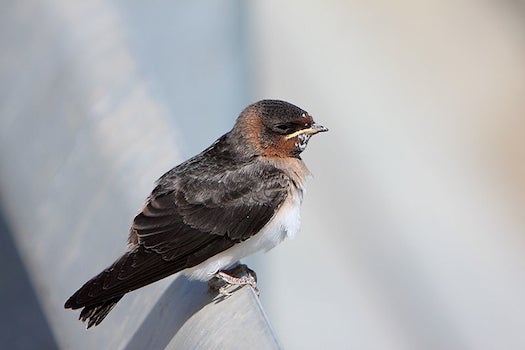 If you’ve ever had the soul-crushing misfortune of hitting a bird while speeding down the road, you can at least take heart in the fact that some birds are, on the whole, getting better at dodging them. A new paper published today in the journal Current Biology theorizes that today’s natural predators (like the Ford F-150) are causing birds to adapt.

Every year for the past 30 years, researchers have been acting like urban Darwins, observing cliff swallows in Nebraska and surveying how they die. The swallows often build nests under bridges or other well-trafficked areas and so, occasionally, get hit by cars. The researchers tracked birds who’ve died by car, and then compared them to birds who accidentally died some other way. They’ve found that, during the last three decades, the swallows have been dying less by car, and it’s not caused by the number of birds in the area or number of cars on the road. Something else is up, the researchers surmised.

The roadkill surveys indicate it’s the long-winged swallows who are getting hit by cars; the shorter-winged birds may be able to turn and take off faster than their counterparts, avoiding oncoming traffic. That means there’s a natural selection process happening out on the road.

That’s at least the idea, anyway. There are other factors the researchers point out–like the fact that swallows can learn from each other–that might also be contributing to swallows dying less. Regardless, they’re somehow avoiding becoming roadkill.