Their brain cells adapt to help them navigate on the fly. 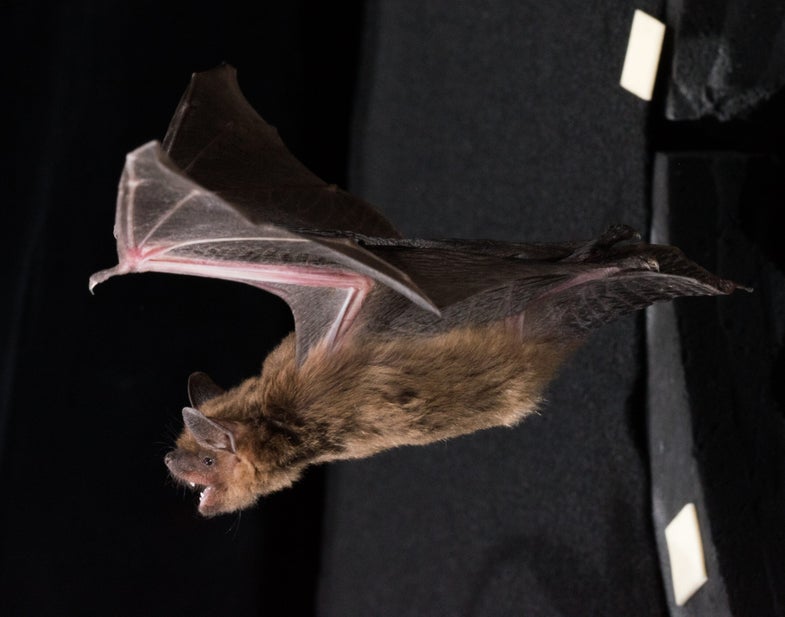 While hunting for dinner, the big brown bat must hone in on flitting insects and keep track of its surroundings to avoid crashing into them. Now, scientists have taken a peek at what’s going on in these bats’ brains while they swoop and dive. They identified a brain region that helps the animals map where objects are in relation to their own bodies, and saw that individual brain cells changed their behavior while the bats focused their attention on a particular object. The findings, published April 10 in the journal eLife, could help us understand certain aspects of attention issues in people as well as how bats and animals navigate while on the move.

Bats are a good starting point to learn about how the brain manages this trick, because their echolocation cries can reveal exactly what they are paying attention to while sizing up their surroundings. “Every time it vocalizes, it’s as if it’s shining a flashlight beam upon the world,” says coauthor Melville Wohlgemuth, a behavioral neuroscientist at Johns Hopkins University in Baltimore. A bat can adjust this beam of sonar when it wants to get a better “look” at a particular item. By squeaking more quickly, the bat captures more detailed information.

“We’ve seen for decades that they change their vocalizations to get better resolution in the environment, but it’s never been shown on a neural level what is actually happening,” Wohlgemuth says.

To find out, he and his colleagues implanted a wireless device to record electrical activity in the midbrains of big brown bats, then let them fly around a room with plastic canisters hanging from the ceiling. As the bats fluttered around these obstacles, the scientists videotaped them to track the animals’ flight paths and where they aimed their heads. The team also recorded the bats’ echolocation calls.

By putting all this information together, the researchers could figure out which brain cells became active when the bats noticed obstacles. They saw that a region called the superior colliculus encodes where these objects are positioned in three-dimensional space as the bat moves about.

This brain region is found in all vertebrates. Until now, scientists have been limited by bulky brain recording equipment and mostly spied on this brain area in stationary animals performing unnatural, two-dimensional tasks like watching a dot move on a computer screen. “We really wanted to look at his from the perspective of how the brain operates in the real world,” Wohlgemuth says. “To have an animal fly unencumbered and record wirelessly from the brain is really only a recent capability.”

It turns out that different neurons in this brain area are tuned to different patches of space around the animal. So if a bat is flying about, certain neurons might fire when it approaches a tree branch that is off to its left, twenty feet distant, and hanging at the same height as the bat. Others might become more active as the bat’s sonar pings bounce off a deer wandering below, or a lamppost directly ahead.

And when a bat inspects a particular object, individual neurons start to behave differently. As the bat squeaks more rapidly, the region of space that prompts each neuron to fire shrinks. “When the bat pays attention to an object, the representation of that object sharpens in the brain,” Wohlgemuth says. In other words, the bats could build a more precise mental picture of the location of whatever they were squeaking at. In humans, something similar might happen when we focus our gaze on an item to see it better.

Scientists believe that the superior colliculus also helps animals react to the sensory input it gathers. It might prompt a bat to shift its flight path to avoid hitting a tree, or start rapid-fire squeaking to capture more information. In future, Wohlgemuth and his colleagues would like to investigate how motor neurons in the superior colliculus behave as the bats fly about.

In people with attention issues, researchers suspect the superior colliculus does not function normally, perhaps in ways that make them more easily distracted by sensory input. Understanding how activity in this brain area shifts when an animal is trying to pay attention could perhaps help identify how these processes might be faulty in somebody with ADHD, Wohlgemuth says.