Will A Chicken That’s Fed Lemons Taste Like Lemons? 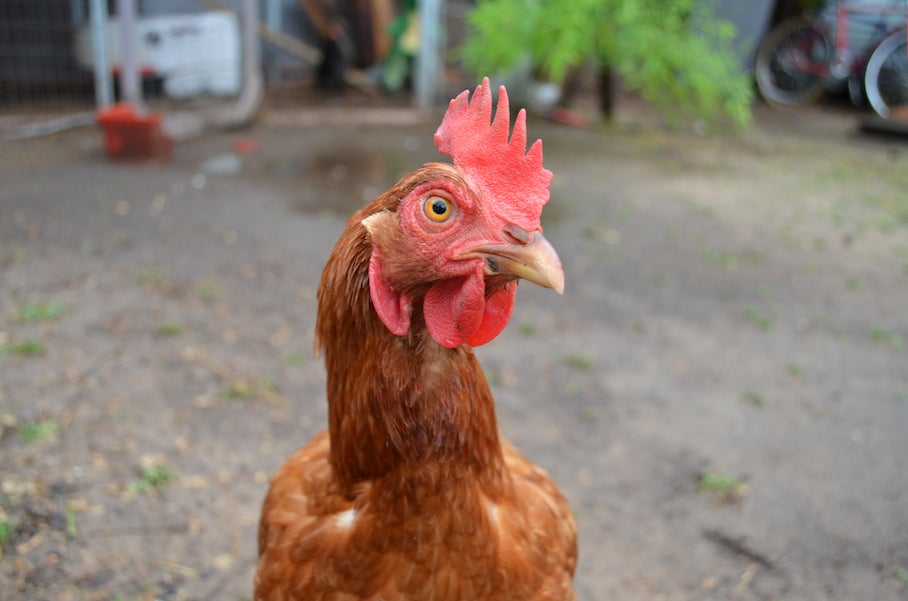 A recent New York Times story looked into the high-end chicken market. These are chickens in stark contrast to factory chickens, fed with produce that’s out of the price range of most humans. David Burke, one of New York City’s most prominent chefs (he runs Fishtail, David Burke Townhouse, David Burke Kitchen, and several others, was a contestant on Top Chef Masters, and, um, has a line of flavor sprays), chimed in with this head-scratcher:

“Listen, if the chickens ate ginger and lemon, you would have a gingery, lemony chicken, I think.”

A ginger-lemon chicken sounds fantastic! But, um, wait a second. Is that scientifically possible?

Basic question first: does what you eat affect your flavor? (Using “you” here is kind of odd, assuming that you don’t intend to be eaten later. Anyway!) The answer is, certainly, in a general way. What an animal eats has an effect on its fat: how much of it there is, what texture it is, where it is, and, yes, what it tastes like. “Some compounds do end up in the fat,” says Dr. Annie King, of the University of California at Davis’s Department of Animal Science. “That’s where you’re getting a lot of flavor from.” But not all flavors eaten by the animal will be carried over into the flavor of the meat. Some compounds, like salts, are water-soluble, and others will be metabolized by the animal’s organs before they ever make it to the tissue or fat. But some fat-soluble volatile flavor compounds will survive mostly unscathed through the digestion process and make their way to fat cells in the animal’s body.

So can you impart specific flavors by feeding an animal specific things? 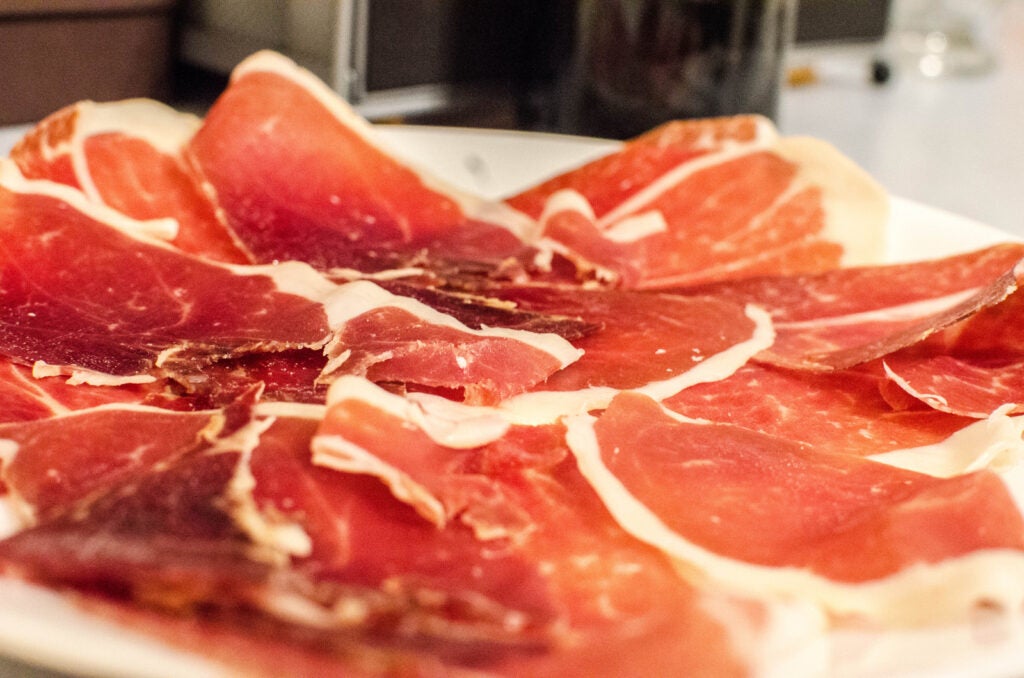 Let’s look at some examples.

The famous black Iberian pig, raised for the world-famous jamon iberico, a cured ham, is allowed to roam freely through the forests of Spain, gorging on acorns. This pig is noted for its spectacularly marbled flesh, meaning it has an extremely high fat content which is interlaced throughout the muscle tissue–it’s called intramuscular fat–rather than in clumps. The acorn-heavy diet, coupled with the fact that the pigs are highly active in their search for acorns, has some interesting effects on their fat. The pig has very soft fat, low in tough collagen, making it perfect for unheated preparations like ham. And the fat, especially after the curing and drying process, has very high levels of omega 3 fatty acids and oleic acid.

Acorns are high in fat, like most nuts, but the specifics of how they’re metabolized are not well understood. When the pig eats the acorns, its small intestine breaks down the fat in the acorns by using pancreatic lipase, an enzyme secreted from the pancreas. That fat is broken down into a few parts–ethanol, free fatty acids (meaning a fatty acid not attached to another molecule), glycerol–in order for these components to pass through the wall of the intestine. Once they’re past that wall, they reform back into a version of their old form, called a natural triglyceride. Those triglycerides are shuttled throughout the body via the bloodstream, where they can be used for a bunch of different tasks–some will be used as energy, some will contribute cholesterol, and some will simply remain as fats and plop themselves into fatty tissue. Acorn fat, we think, performs much more of that latter task than most other pig feed. This study shows that the intestinal workings of Iberian pigs are not very different from any other breed–the only major difference between the breeds, then, is what they eat.

Oleic acid, as its name suggests, is usually associated with olive oil–it’s an omega-9 fatty acid. (The “omega” number merely refers to a bond in the fatty acid’s chemical formula, not any sort of ranking.) “If [meat] is higher in oleic acid, people tend to prefer the flavor,” says Stephen Smith of Texas A&M’s Department of Animal Science. Research indicates that rats tend to prefer foods high in oleic acid. Pigs fed with other diets, like corn and soybeans, have lower levels of oleic acid, and lower levels of fat, period, than acorn-eating pigs. Your typical factory-farm-raised pig won’t have the rich fatty marbling of an Iberian pig.

The Iberian pigs don’t taste like acorns, though; the high tannin levels in acorns are said to lend the pig a certain flavor, but so far no blind studies have been able to prove a tannic flavor to the pig. The process of metabolizing these foods is highly complex; flavor compounds are much more delicate than the fatty acids inside the acorns, and are likely to be broken down or altered on their trip through the pig’s digestive system. The fatty acids, though, make their way unscathed to be stored in fatty tissue. Plus, the tannic flavor comes from a specific compound–and the pig isn’t getting enough of that compound in its diet for the pork to taste bitter. So clearly this isn’t a simply “you are what you eat,” or, um, “you taste like what you eat” situation. At least, not all the time.

Cows, like the Iberian pigs, mostly eat one kind of feed. Meat cows in this country are often described as either corn-fed or grass-fed (though some are grass-fed and finished on corn).

This 1990 study in the Journal of Animal Science performed lots of surveys to find out if people could tell a flavor difference between corn-fed and grass-fed beef. The study made sure the fat content and texture of the two samples were similar, and then fed them to testers. The result? The grass-fed beef was found to have a “grassy” or “milky-oily” flavor, which the testers, accustomed (as most Americans are) to corn-fed beef, found less desirable than the “beefy” flavor of corn-fed meat. Diving deeper into the various studies, it seems that there are an array of flavor volatiles in the grass-fed meat that aren’t present in the corn-fed; a chemical called phyt-2 ene, for example, was correlated with a grassy flavor. Other compounds, including diacetyl, 2- and 3-pentandione, octane, hexanal, 1-hexanol, and octanal were found to be associated with the “beefy” flavor in corn-fed beef. When the researchers injected the grass-fed beef with some of those “beefy” compounds, they found that the testers could no longer distinguish the difference between the grass-fed and corn-fed beef. 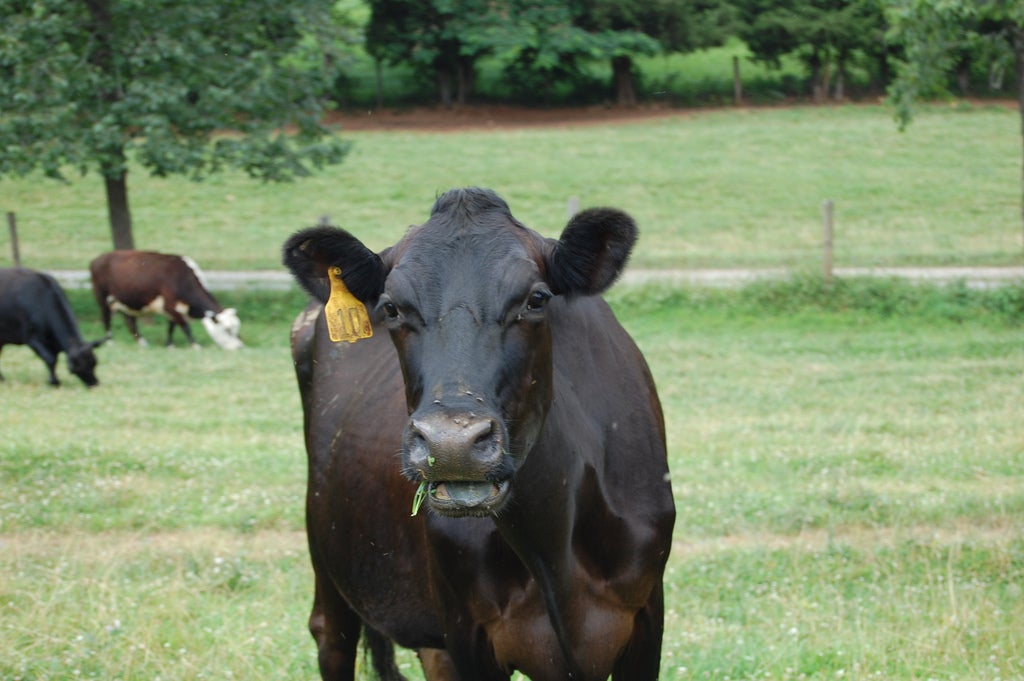 Meat animals are sometimes fed fish oil as a dietary supplement, which has been found to increase joint and organ health. Farms, both factory and not, have a vested interest in keeping their animals at least at a certain level of health; an animal that dies of natural causes is of no use to anyone, and fish oil is a cheap way to improve the health of an animal. But fish oil is extremely pungent, and animals fed fish oil tend to taste…fishy. We already have a chicken of the sea; no need to create a chicken that tastes like it’s from the sea. Fish oil is a micronutrient, but a spectacularly powerful one; it’s easily fat soluble and its flavor compounds appear to be strong enough to survive the metabolyzing process, so the animal doesn’t need to have all that much of it for the flavor compounds to change the test of its flesh.

Fish oil isn’t the only flavorful oil; many kinds of nut oils (walnut, peanut) are also strong in flavor. But it does not appear that anyone has ever attempted to feed a chicken peanut oil to see if it tastes like peanuts. There isn’t really any reason to; unlike fish oil, peanut oil doesn’t have any particularly farm-friendly benefits, and at least one study actually indicated that peanut oil clogs the arteries of some animals (this study was conducted with rabbits).

So, sometimes feed has an obvious effect on flavor, and sometimes it doesn’t. Sometimes it has an unpredictable effect! Say you feed chickens a ton of garlic. You’d expect the chickens to taste like garlic, right? Well, no. Turns out, thanks to this study, that the chemicals in garlic reduce the sulfur content of chicken eggs. So not only did the chickens not taste like garlic–they actually tasted milder than chickens that weren’t fed garlic. 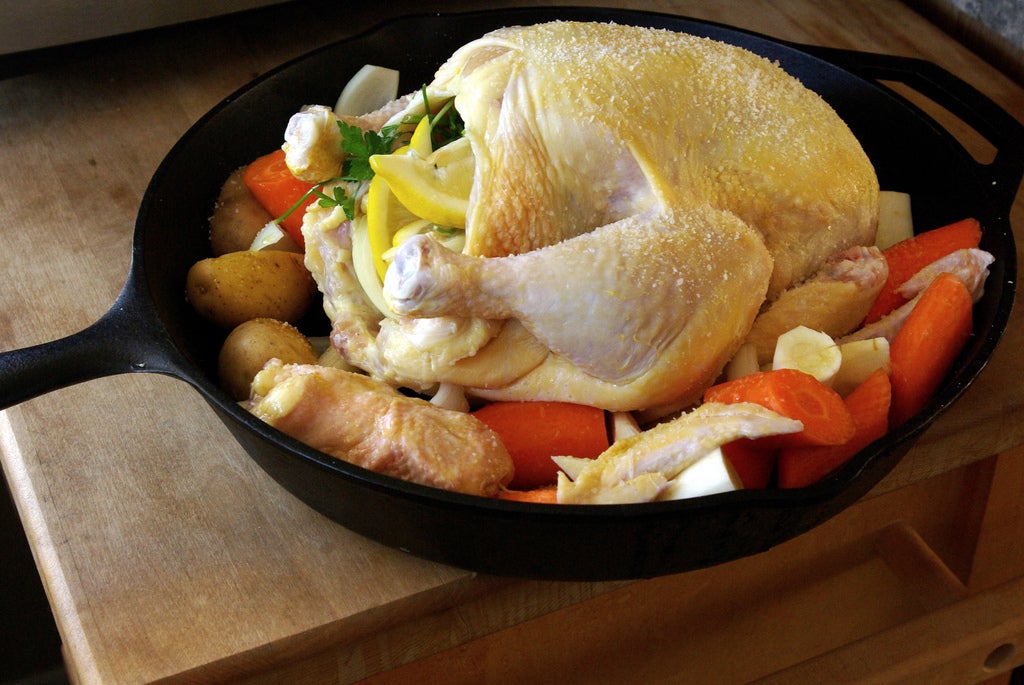 What about that lemon chicken? Well, lemon’s flavor is largely in its peel. The chemical compounds that give lemons their flavor are called limonoids, and they are toxic in high doses. This study found that high doses of d-limonene, a type of limonoid, the main flavor compound that tastes “lemony” or “citrusy” to us, causes cancer in rats. Chicken owners don’t recommend you feed your chicken citrus–most don’t like it, and it’s suspected that it negatively affects egg-laying–but more to the point, to significantly increase the concentration of delicious limonoids in the chicken’s flesh, you would almost certainly have to feed them a fatal dose. Grass-fed beef tastes grassy, sure, but that’s all the cow eats. For a supplement to have that same effect, you’d have to feed the animal an awful lot of it–and you generally don’t want to feed an animal an awful lot of a semi-toxic substance.

This isn’t something that’s been studied in too much depth; we’re making some educated guesses here. I spoke to a few meat science and animal science experts, and they were all sort of puzzled by the question. “I don’t think that study has ever been done, in a scientifically controlled experiment,” Dr. King told me. To really figure this one out, you’d need a pretty elaborate experiment, feeding animals different amounts of volatile flavor compounds. You’d need a team of trained testers to eat all these chickens and tell you which, if any, of the chickens actually has a lemony flavor. Nobody’s done that yet (though I’d like to volunteer as a tester, if anyone’s thinking about trying it seriously).

But our sense, having learned about how flavors are metabolized, is that you can’t safely feed a chicken enough lemons to make it taste like lemons. Just adding a few lemons to a chicken’s feed won’t have any effect on its flavor.