Could A Lion Live On Veggie Burgers?

Short answer: Not by a long shot 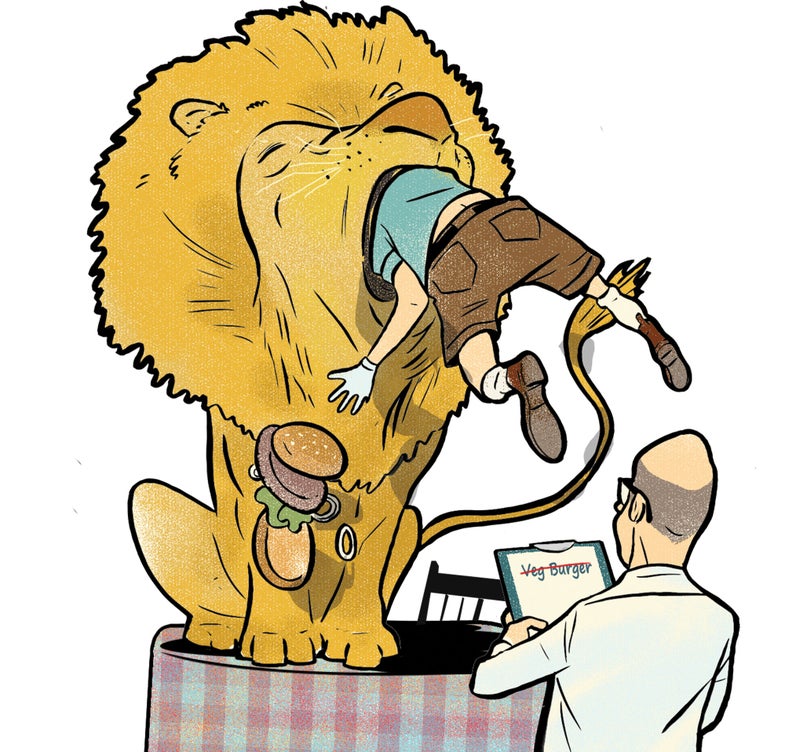 Fake meat, as a rule, garners more complaints than compliments from people. Vegetables lack the complete proteins found in meat, and tend to be a poor substitute for its melange of muscles, tendons, blood, and other tissues–each of which confers a different texture and flavor.

For cats, it goes beyond mere preference. Felines evolved to be obligate carnivores; in the wild, they must eat meat to survive. Even in a zoo, feeding a lion veggie burgers just won’t work, says Barbara Toddes, nutrition program director at the Philadelphia Zoo: “It’s like putting gasoline in a diesel engine.” Lions’ teeth are made to slice through flesh, not grind up grains and plant cellulose. Their stomachs mainly use enzymes to break down fats and proteins; they lack the gut microbes necessary to digest carbohydrates.

Domestic cats, on the other hand, can learn to consume veggie kibble if it has a familiar enough texture and consistency, says Kathryn Michel, a veterinary nutritionist at the University of Pennsylvania. But she cautions that it’s not exactly healthy or natural. A wholly plant-based diet will leave a cat short of essential nutrients, including taurine and cobalamin. Without them, cats can suffer retinal degeneration, or cardiomyopathy, and possibly urinary-tract problems as well.

Pet owners bent on providing a vegan diet can add synthetic versions of these nutrients to their cat’s feed. In a 2004 study, Michel performed blood tests on 17 vegan cats, and 14 of them had normal levels of taurine and cobalamin. So veggie burgers might be palatable for your house cat, but definitely not if that cat is a lion.

This article was originally published in the August 2015 issue of Popular Science, under the title “Could A Lion Live Off Veggie Burgers?”

Animals
Ask Us Anything
ask anything
august 2015
carnivores
food
lions