It's off the chain One of the few natural disasters that they’ve largely managed to avoid is volcanoes. There are no active volcanoes on the Australian mainland, but go a few million years back in time, and you’d find a very different landscape.

Researchers recently announced that they had located the largest chain of volcanoes ever found on a continent. The range of volcanoes stretches across the entire continent and onto Tasmania, a distance of over 1,200 miles (2,000 km).

How did we miss a massive string of volcanoes? They aren’t that big anymore, and they aren’t spewing lava all over the Earth. In fact, they look more like this: 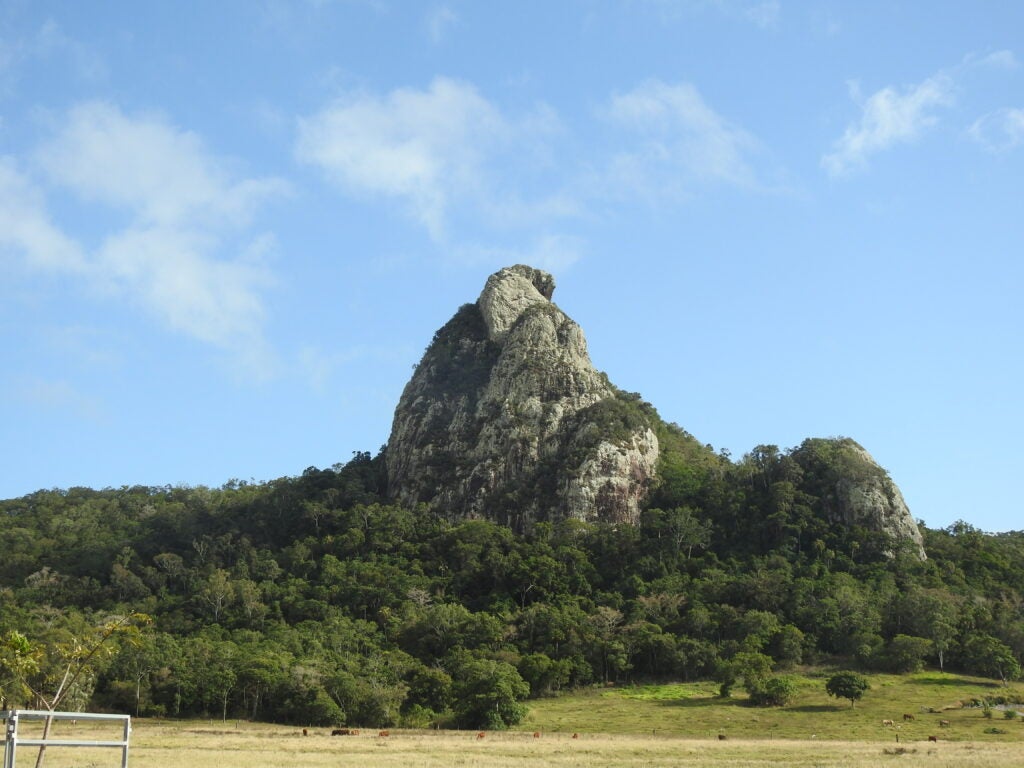 The remnants of a volcano in Queensland, Australia.

The volcanic chain was formed between 9 million and 33 million years ago, as the Australian tectonic plate moved over a hotspot in the earth called a mantle plume.

Everything on Earth, from the mountains to the oceans rests on a thin brittle layer of rock called the crust. This crust is broken into sections called tectonic plates that move around on top of a more flexible (and very hot) layer of rock called the mantle. But not every single place in the mantle is created equal. Just like on a finicky stove, there are sometimes areas of the mantle that get much hotter than others. This heat is often concentrated in a small area, and melts the crust like a blowtorch, creating a volcano in that spot. While plates can move, these hotspots tend to stay in one place.

As the plate moves over the hotspot, the volcano moves with it. It doesn’t have a heat source anymore, and gradually stops erupting and growing. Now, a new section of the crust is over that hot spot, and a new volcano starts growing, giving the old volcano a new companion.

The process continues in roughly a straight line as the plate moves over the hotspot, creating a long line of volcanoes, also known as a chain.

While the chain in Australia is the largest chain to form on a continent, it isn’t the largest one on earth. A particularly persistant hotspot formed a series of undersea volcanoes and islands in the Pacific ocean as the Pacific plate moved north and then sharply west, eventually forming the Hawaiian islands. The Hawaii-Emperor chain is over 3,700 miles (6,000 km) long. Over the past several million years, the Pacific plate has moved north and then north-west over a hotspot. The movement formed the Hawaii-Emperor chain of volcanos, seen here.
Australia
geology