This Tower Would Let City Dwellers Tour The Natural World

Circumnavigate the globe by elevator 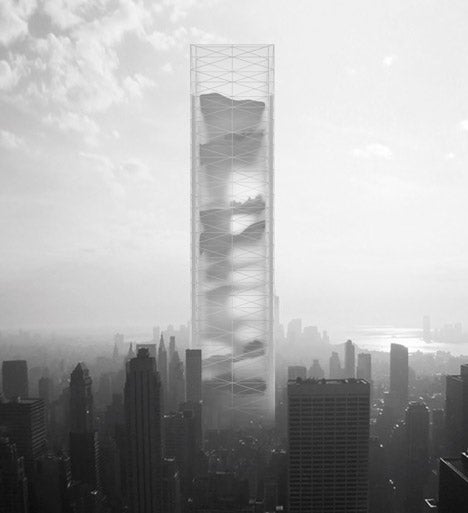 City dwellers are reportedly 40 percent more likely to develop mood disorders than people in rural areas. But walking for roughly 90 minutes in nature, according to a Stanford University study published in June, can calm the negative thoughts. The Essence Skyscraper is designed to provide urbanites with just such an experience. The 2,067-foot tower, envisioned by a Polish architectural team, won a 2015 skyscraper competition to redefine high-rises. Within the imagined 3.6 million square feet, visitors cross 11 distinct ecosystems from around the world. “We wanted something that would blend into an urban fabric,” says team member Jakub Pudo, “something that would allow us to go inside and get lost.” 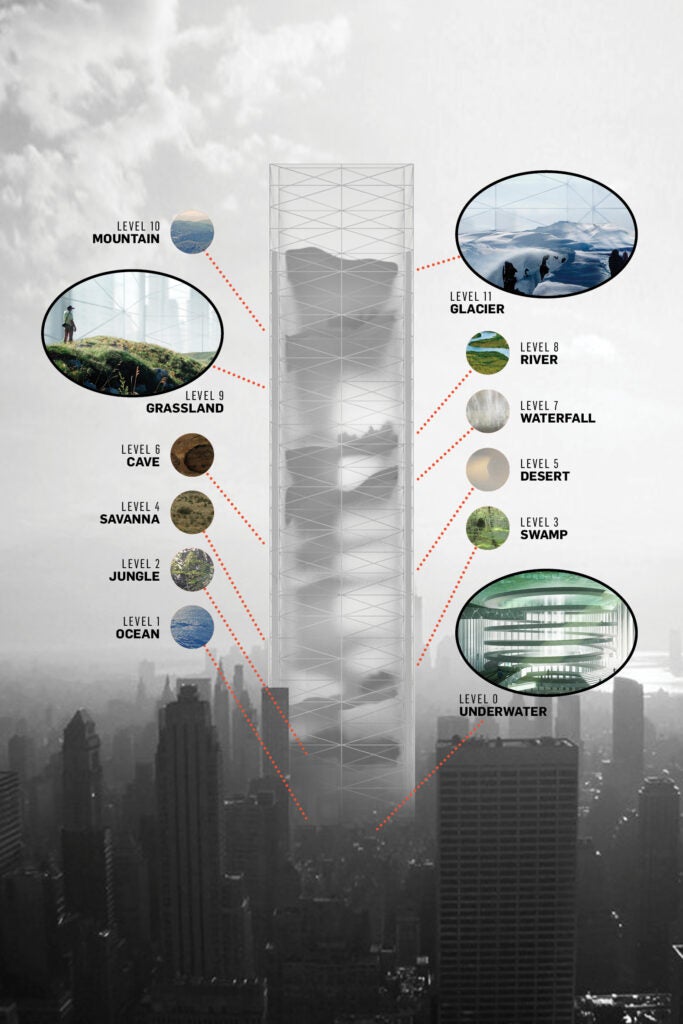 Savanna In The City

Imagined in New York City, the hypothetical 2,000-foot skyscraper would tower over One World Trade. The dozen floors would be highly spacious, allowing visitors feel the expanse of nature as they wander through different biomes and habitats.

Visitors ascend through the ecosystems on a series of gradual ramps. The skyscraper’s design lacks the vertical beams and horizontal concrete slabs typically found inside a building, so these gradients also provide an element of structural support.

Ecosystems flow gently into one another, thus avoiding the climate-control nightmare of, say, going from African savanna straight into an Antarctic glacier. Instead, similar climates, such as a jungle and a swamp, abut one another.

For visitors who want to quickly jump levels, staircases and elevators nest in a 33-foot gap between the building’s facade and the interior ecosystems. Utilities, such as HVAC and power systems, hide beneath the glacier, desert, and river levels.

The all-glass building lets in sunlight, so there’s no need for artificial lighting. But a synthetic coating gives the glass a foggy appearance, which obscures the urban jungle from the indoor one.

Ceilings range from 98 feet in the desert to 197 feet in the grassland to 295 feet in the mountain range (to accommodate its towering peaks). This open space makes the landscapes feel more natural, says Pudo.

Water moves through the tower from top to bottom. It melts off a glacier and flows into a river, which drops down over a waterfall and percolates into a swamp before making its way into the ocean below.

This article was originally published in the October 2015 issue of Popular Science, under the title “Tour the Natural World in a Single Tower.”