Are Fish As Intelligent As Crows, Chimps… Or People?

The science shows that fish use tools, feel pain, have long memories, and deserve better treatment from us. 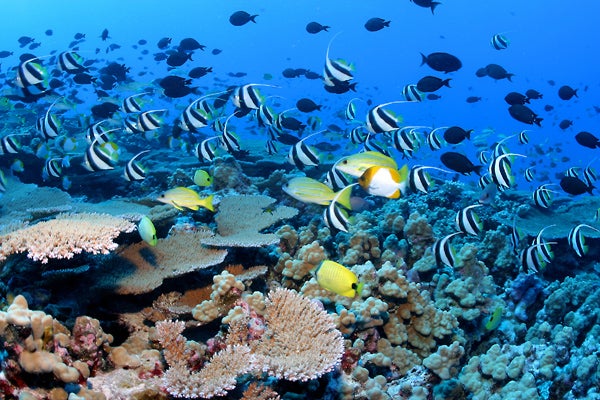 Whether they’re caught in the wild or raised in captivity, fish are a major food souce worldwide. Nearly 5 billion people worldwide got 15 percent of the animal protein in their diets from fish in 2011; for another 2.9 billion it was 20 percent. In 2011, that added up to about 132.3 million metric tons of fish.

But the welfare of fish—which are vertebrates just like cows, pigs, and chickens, and possessing evolutionary lineages as long as those of homo sapiens—has been barely discussed. As a result “the potential amount of cruelty we’re inflicting is mind-boggling,” says fish biologist Culum Brown, an assistant professor at Macquarie University in Australia. “People need to have a greater appreciation of how smart fish are,” he says. “Just because we’re ignorant is no excuse to treat another animal poorly. All the evidence suggests that they’re just as sophisticated as other vertebrates.”

Brown makes a scientific case for reform in “Fish intelligence, sentience and ethics,” a paper published in the June 2014 issue of Animal Cognition. The work was partially funded by the organization Farm Sanctuary, under its “Someone, Not Something” project.

Brown reviewed nearly 200 research papers on fish sensory perception, natural cognitive abilities (including “numerality,” or an ability to assess quantity), and abilities to perceive and experience pain, and found ample evidence that fish are intelligent on all counts.

For instance, some fish species use tools. Brown cites research showing that certain types of wrasse use rocks to crush sea urchins in order to eat their softer insides, while cichlids and catfish have been observed gluing their eggs to leaves and small rocks, which they carry around when their nests are disrupted.

Tool use was long considered unique to human beings, but has become well-acknowledged in species such as chimpanzees and New Caledonian crows.

Fish can also learn quickly and can keep memories long-term. Brown’s own research found it took only five trial runs for rainbowfish to learn how to swim out of a net via a single hole, and that they remembered the escape route after not seeing the net for nearly a year. “This is remarkable for a fish that only lives for 2 years in the wild,” writes Brown. “Moreover, the more fish present in the group the faster they learn,” just one example he cites of fish displaying “social learning.”

Fish also show “Machiavellian intelligence,” the ability to manipulate the behavior of others via deception, or by reconciling with them. Cleaner fish of the Great Barrier Reef, which eat away the dead skin and parasites on other fish, utilize a “fantastic reconciliation process” when they bite their food carriers by mistake, says Brown. “It turns out, and I think this is very cool, they often give a back rub to their clients.”

To try and understand why, a fish biologist devised an experiment: Install a rotating brush at the surface of an aquarium, and see if fish come up and self-administer back rubs. When they did, the question changed to why they did it. “There doesn’t seem to be any physical benefit,” said Brown, “but they looked at their hormones, and it turns out it’s reducing stress levels, like some remedial massage. It’s bizarre!”

Whether fishes feel pain is a controversial question, Brown acknowledges, in part because the answer has ramifications for the fishing industry, as well as scientific lab practices. He takes the position that fish have all the neurological hardware they need to sense pain, just like other vertebrate species; they respond to analgesics by displaying fewer symptoms of pain; and appear distracted when in pain. These are all signs that fish experience pain in ways that that humans can relate to, much as we can feel empathy for pain experienced by pet dogs or cats, or cows and chickens raised for food.

Although these days he’s more likely to jump into a stream with a snorkel and mask than a fishing rod, preferring to observe fish rather than hook them, Brown does not advocate an end to fishing or aquaculture. “I come from a very long line of anglers,” he says. “My father’s family is from Scotland, where they’ve been fly fishing since God knows when, probably since fishing was invented.”

Rather, he’d like to see “the sort of revolution, the sea-change in attitudes, in aquaculture and industrial fishing” that seems to be gradually improving the treatment of other animals we eat.

“If you’re catch and kill an animal, you catch it as quickly as possible with a minimum amount of fuss, and you kill it, dispatch it as fast as you possibly can, with the minimum amount of suffering,” Brown says. “That’s what you expect [for] any other terrestrial animal, so I don’t understand why people treat fish any differently. And certainly all the data suggest that we shouldn’t be.”