This Wasp Eats Spiders And Stacks Up Corpses Of Stinging Ants

Maybe bone-house wasps listen to too much Slayer. 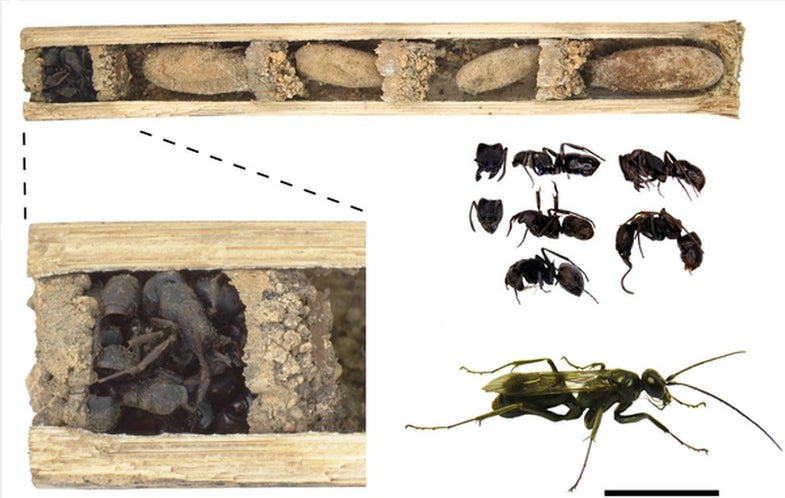 Meet the bone-house wasp. This newly-discovered Chinese wasp species is not afraid of spiders. In fact, it kills spiders with a sting and serves up the arachnids as food for the wasp’s eggs.

Unlike other wasps in the family Pompilidae, which also dine on spiders, the new species also kills ants and puts them in the entrance to its larvae-filled nest. Not just any ant will do. The wasps choose “an aggressive, large-bodied, and common species in the study region that has a powerful sting,” write the authors in a study about the newly described wasp in the journal PLOS ONE.

Why? Scientists think formic acid inside the ants might ward off the wasp’s predators, according to Gwen Pearson at Wired. This idea certainly has precedent: Various animals use the defensive chemical in the ants to protect themselves from attack. Such “anting” behavior has mainly been observed among birds. But it’s unusual to see an organism hoard ant corpses and stack them up like a warning.

The species has been given the name Deuteragenia ossarium, the latter name which means “receptacle for the bones or ashes of the dead.” Which makes bone-house wasps pretty metal, if you ask me.