Darlin' its better down where it's wetter. 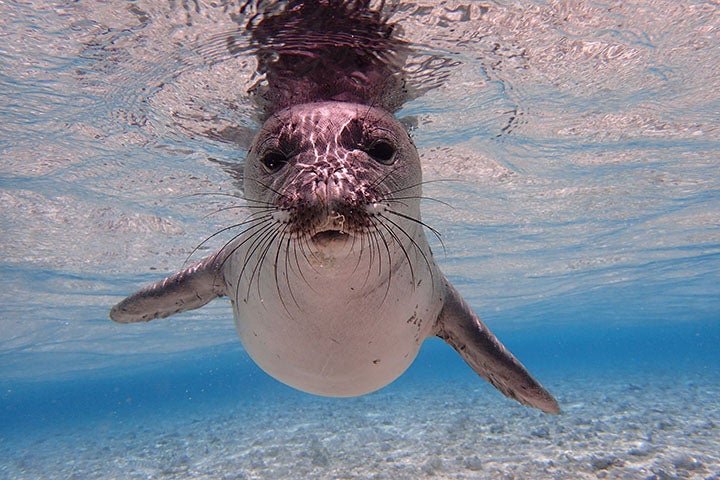 Briny… thunderous… vast. Standing on the edge of an ocean, feet curled into the damp sand, one can’t help but feel small—whether the ocean in question is the Pacific along Oregon’s coast, where only the foolhardy dares a dip in the chilly waters sans wetsuit, or the waves of the Florida Keys, where the Atlantic turns clear and warm as it mingles with the Gulf of Mexico. On a human scale, the world’s oceans feel wild and interminable: a resource that we can use but never control, and certainly never harm. They seem too vast, too varied, too…too to ever succumb to the harm that 7.3 billion humans (and counting) could mete out. Right?

In this, there are lessons perhaps to be drawn from a Vervet monkey in Kenya, who in June of 2016 climbed onto the roof of the Gitaru Power Station and either fell or jumped onto a transformer, setting off a chain reaction that would result in a nationwide black out. Even small actions, applied carelessly, can cause catastrophic harms. We humans fumbling about the world’s oceans draw strong parallels to our Vervet cousin.

Although the world’s oceans cover 70 percent of the planet, humans have caused irreparable changes to their ecosystems through overfishing—estimates suggest that the world could essentially run out of fish by 2048. We’ve inundated the ocean with pollution from plastic, which can be found not only in the immediate vicinity of our population centers, but also in the farthest reaches of the Arctic where humans are scarce. Chemical pollutants—such as the remains of industrial processes—are so abundant that they are now found in the ocean’s deepest depths. And underpinning all of this is climate change, which is warming the oceans and threatening coral reefs. Australia’s Great Barrier Reef, the world’s largest, experienced two years of back-to-back bleaching of over 50 percent of its corals, leaving many to worry over the reef’s continued existence. Increasing carbon dioxide emissions have also made the ocean more acidic, threatening the life of many aquatic animals.

But we need the ocean. These waters, courtesy of an unusual bacteria named Prochlorococcus, provide the majority of the world’s oxygen. At the same time, 3.5 billion people depend on the oceans for their primary source of food.

In 2009, the United Nations declared June 8 World Oceans Day in recognition of the importance of the sea to human society—and the very real harm that we are currently inflicting on this precious resource. It is a day of celebration, and also of caution; a time to marvel at the ocean’s bounty and to recognize the role that we play in either destroying or maintaining it.

Corals are home to millions of species. Humbug dascyllus (Dascyllus aruanus) and multibar goatfish (Parupeneus multifasciatus) are commonly seen in the shallow reefs and lagoons of American Samoa.

Coral bleaching in Okinawa, Japan, captured in September 2016 during the third ever global bleaching event. Global coral bleaching is caused by climate change and was unheard of before the end of the 20th century.

A school of whitespotted surgeonfish (Acanthurus guttatus) pause their grazing for a moment before moving on to another suitable patch of reef in American Samoa.

Coral bleaching in Okinawa, Japan, captured in September 2016. When water grows too warm, the symbiotic algae that keep corals alive vacates the premises. This isn’t normal.

A close-up of a crown-of-thorns starfish at Gardner Pinnacles in Papahānaumokuākea Marine National Monument.

The Kingman Reef, which lies 925 miles south by west of Honolulu.

Coral bleaching in the Maldives captured in May 2016—part of the third ever global bleaching event. It’s unlikely the world’s coral will ever recover.

A giant moray (Gymnothorax javanicus) hangs out in Fiji.

A Blue sea star (Linckia laevigata) in Fiji, photographed in 2008.

Thousands of miles away from the closest human settlement, fishing nets hundreds of feet long linger in the Pacific Ocean, set free from their owners to continue serving their purpose: ensnaring fish. Fish and turtles get caught in the nets and die.

A stalked octocoral found in the Gulf of Mexico.

This rare dumbo octopus (Cirrothauma murrayi) is often called the Blind Octopod due to the lack of a lens and retina in its eyes. Its eyes can only detect light and cannot form images.

Copepod with eggs seen under the microscope.

A whale shark encounter off the Caribbean coast of Panama. This fish was about 16-18 feet in length, but whale sharks can grow to 40 feet—and are the world’s largest fish.

Octopus or squid larva seen under the microscope.

A jellyfish on Fumitsuki Maru.

A large shark (Carcharinus sp.) with remora swimming below.

Damaging heavy rains fell on South Carolina in the southeastern United States at the beginning of October 2015. Much of that water had, by mid-October, flowed into the Atlantic Ocean, bringing with it heavy loads of sediment, nutrients, and dissolved organic material. The above image, from the Visible Infrared Imaging Radiometer Suite (VIIRS) instrument on NASA-NOAA’s Suomi NPP satellite, shows the runoff as it interacts with ocean currents on October 15.

A close-up of this Antarctic shag highlights characteristic blue and yellow/orange growth above its beak, which is brightest during the breeding season—presumably to attract mates.