In the September 1966 issue of Popular Science, author John Steinbeck made the case for giving deep-sea exploration the same attention as the space race. 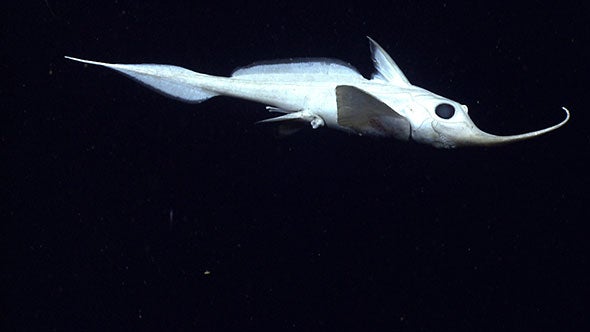 Three years before the first humans landed on the moon, Nobel-prize winning author John Steinbeck published a passionate plea in Popular Science for equal efforts to explore “inner space.” In an open letter to editor-in-chief Ernest Heyn, Steinbeck argued that the investigation of Earth’s oceans was critical to the success of humanity and deserved the same funding and organization as space exploration. You can read this letter as it originally appeared in the September 1966 issue of Popular Science.

Dear Ernie Heyn: I know enough about the sea to know how pitifully little we know about it. We have not, as a nation and a world, been alert to the absolute necessity of going back to the sea for our survival.

I do not think $21 billion, or a hundred of the same, is too high a price for a round-trip ticket to the moon. But it does seem unrealistic, unreasonable, romantic, and very human that we indulge in these passionate pyrotechnics when, under the seas, three-fifths of our own world and over three-fifths of our world’s treasure is unknown, undiscovered, and unclaimed.

Please believe, Ernie, that my passion for the world’s seas and underseas does not lessen my interest in our space probes. When the astronauts go up in their beautiful skyrockets, my stomach goes up with them until it collides with my lungs and pushes them against my throat. I set my clock for two a.m. recently to watch a crazy scarecrow-like structure settle gently on the moon, a job of such intricacy as to stagger the imagination. But besides the sweetness and delicacy of the thinking, planning, and building, the very fact that we do it proves that human beings have not changed—we are still incurable, incorrigible romantics.

We may think back with wonder on people capable of a search for the Golden Fleece, capable of picking up their lives and going on crusade in the Middle Ages—but are we any different? The budget for getting two Americans on the moon is $21 billion, and it will necessarily come to much more. And what they will bring back will be what Dr. Urey calls a pocketful of rocks for him to analyze. If you ask an American why we want to get to the moon, he will usually say, “To get there before the Russians,” and the Russians probably use the same answer—to get there before we do. Pressed further, the one polled will go off into a burble of pseudoscientific jargon and equally pseudomilitary nonsense. Dr. Urey gives a truer reason—because we are curious. And it seems to me that one of the definitive diagnostics of the human animal, besides being the key to his success in survival and triumph over the forces of nature, is curiosity.

But, while the lifeless rubbled surface of the inconstant moon becomes increasingly littered with the burnt-out bones of vehicles, the bathyscaphe has visited the deep and unknown places of the earth only a few times. There is never much argument about appropriations for space shots, but a recent request for money to explore, map, and evaluate the hidden places of our mother earth brought howls of protest from Congressional leaders and the inevitable question—is it really necessary?

Ernie, I’m going to try to put down some of the reasons why I think it is really necessary to explore the sea.

It is a pitiful few thousand years that have passed since men and women roamed the earth eating anything that didn’t eat them first. Men moved as the game moved, and the game followed the grass. With the domestication of animals, the roving continued, but only following the grass. With the beginning of agriculture, the crops stood still and most men settled down. But over the years, by selection, the animals changed and the cereals changed.

The grains we use today have little resemblance to their ancestor seeds, and the animals could not be recognized by their early progenitors. Man has changed the face of the earth and the inhabitants thereof, with the possible exception of himself. But the seas he has not changed.

In our relation to three-fifths of the world, we correspond exactly to Neolithic man—fearful, ignorant, and swinish.

We peck like sandpipers along the edges for the small treasures the restless waves wash up. We raid the procession of the migrating fishes, killing all we can. Even the killer whale herds the sperm whales and kills them only when it needs food— but we have wiped out some species entirely. We have not improved nor changed a single species of sea-going fish. And the huge agriculture of the seas we have ignored completely, except to rip out the fringes for iodine or fertilizer.

I said that three-fifths of the earth’s surface is under the seas—but, with the washing down from the continents of minerals and chemicals, it is probable that four-fifths of the world’s wealth is there.

More important in the near future, the plankton, the basic reservoir of the world’s food, live in the sea. We have not even learned to make this boundless bank of protein food available for our bellies.

Of all the mysteries and enigmas of our world, man is the strangest and most incomprehensible. Without the pressure of cold, hunger, disease, danger from outside, and even greater danger from the quarrelsome combativeness in his own heart, it is probable that he would still be living in trees, and still eating everything he could kill or break up into bite-sized chunks.

Survival has been the mother of our inventiveness. War has spawned not only weaponry, but a knowledge of mechanics in all directions. General Hap Arnold once remarked that without war we would probably never have developed the airplane, and between wars development just about ceased.

We have wiped out the animal predators that once decimated embattled families. We are by way of defeating the micro-enemies which secretly invaded our bodies to strike from within. And finally we find ourselves faced with the most ghastly enemy of all—ourselves, too many of us in a world with a limited food supply. And hungry men will destroy anything, even themselves, to get food.

We peck like sandpipers along the edges for the small treasures the restless waves wash up.

At the same time we have invented the cold war, a continuing state of hostility between wars, which keeps our inventiveness in the mechanics of destructiveness alive. This, too, may be the result of our uneasiness in the face of our exploding numbers. Meanwhile, the intricate and expensive skyrockets litter space with an orbiting junk pile, and we can easily justify it as a means of defense.

But it is possible that we may be driven back to our mother, the sea, because we are running out of supplies. Two men with their pockets full of moon rocks will not solve the situation. On the other hand, the planning, computing minds which so gently laid that crazy-looking scarecrow on the moon could easily design the means, not only for exploring our watery world, but for placing whole producing cities on the sea bottom.

If our inventive minds were given the money and the incentive of necessity for the desalting and moving of sea water, it would be a very short time before life-giving water would flow to desert places which make up so much of our world, so that they might flower and produce.

To me, personally, the oceans mean safety, mystery, and wonder.

During the depression I lived by the sea and took most of my protein food from it and lived very well indeed.

I have studied the endless variety of ocean animal life—hundreds of thousands more species than are to be found on land.

Several years ago I went along as an observer on the Mohole Project. You remember that was the expedition which put down a drill string to the earth’s crust under 18,000 feet of water near Guadalupe Island, off the west coast of Mexico. We didn’t get very far—took six cores through sediment and into the basic basalt of the earth’s crust. But on the basis of those six cores, textbooks had to be rewritten.

What we found was older than we expected and different from what we thought was there. But an attempt to probe farther has met strong resistance from some money-allotting members of Congress.

The men in the rockets are rather like human sacrifices, taking a part of all of us with them. Oceanology, on the other hand, is slow, undramatic, and singularly unrewarded, although the gifts it can bring to us are measureless and will soon be desperately needed.

Many wonderful men are working, studying, evaluating. At this writing there is a convention in Moscow attended by most of the world’s profound students and authorities in oceanography, oceanology, seismology, zoology. They have gathered to discuss and to describe what they have learned, and what they hope to learn.

Experiments are going on all over the world. Cousteau has men living undersea, and so has the American Navy. Men are learning the techniques of changing pressures. Whereas the astronauts must become accustomed to weightlessness and vacuum, the undersea men must learn to endure the opposites. They receive little official encouragement.

What the exploration of the wet world lacks, and must have to proceed, is organization. Undersea study is split up into a thousand unrelated groups, subjects, plans, duplications, having neither direction nor directors. There is no one to establish the path to be followed and see that it is taken. Our space probes could not have gotten off the ground without NASA, a management for analysis, planning, engineering, and coordinating, having the power to give orders and the money to carry them out. The movement to possess the sea must be given the strength and structure to move.

We must explore our world and then we must farm it and harvest its plant life. We must study, control, herd, and improve the breeds of animals, because we are shortly going to need them. And we must mine the minerals, refine the chemicals to our use. Surely the rewards are beyond anything we can now conceive, and will be increasingly needed in an over-populated and depleting world.

There is something for everyone in the sea—incredible beauty for the artist, the excitement and danger of exploration for the brave and restless, an open door for the ingenuity and inventiveness of the clever, a new world for the bored, food for the hungry, and incalculable material wealth for the acquisitive—and all of these in addition to the pure clean wonder of increasing knowledge.

Why, Ernie, even the lawyers will have a field day. No one owns the underseas. Think of the happy thunder of argument over property rights.

For myself, I am hungry for the experience. When the next Mohole expedition goes out, I am going with it. I want to go down in the bathyscaphe to the great black depths. I can’t wait. Surely all this should have at least equal backing with space.

This letter originally appeared in the September 1966 issue of Popular Science.