Earth’s Water Is Older Than The Sun 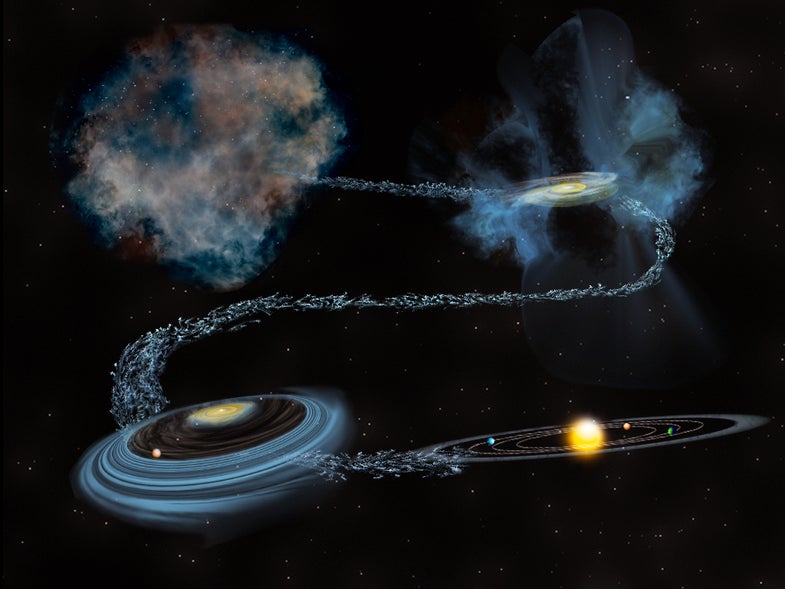 Since water is one of the vital ingredients for life on Earth, scientists want to know how it got here. One theory is that the water in our solar system was created in the chemical afterbirth of the Sun. If that were the case, it would suggest that water might only be common around certain stars that form in certain ways. But a new study, published today in Science, suggests that at least some of Earth’s water actually existed before the Sun was born — and that it came from interstellar space.

That’s certainly something to ponder the next time you drink a glass of water. But the discovery is also cool because it means water — and maybe life — may be ubiquitous throughout the galaxy.

“If water in the early Solar System was primarily inherited as ice from interstellar space, then it is likely that similar ices, along with the prebiotic organic matter that they contain, are abundant in most or all protoplanetary disks around forming stars,” study author Conel Alexander explained in a press release.

The researchers concluded that a significant portion of Earth’s water came from interstellar space by looking at the relative abundance of hydrogen and deuterium.

Deuterium is like hydrogen’s heavier brother. Both atoms have one proton in their nuclei, but deuterium contains an extra neutron, and it mostly forms under special conditions. In interstellar space, for example, water ice contains lots of deuterium, thanks to the freezing cold temperatures and ionizing radiation. Earthly water contains some deuterium, too, but in low quantities — up to 30 times less than interstellar water.

Looking at a water sample’s ratio of hydrogen to deuterium can tell you about what conditions were like when the water formed. But until now, scientists weren’t sure whether Earth’s deuterium came from space, or whether it was cooked up in the birth of the Sun.

To find out, researchers used mathematical models to virtually recreate the young solar system’s protoplanetary disk — the cloud around the newborn Sun. They found that, based on the temperature and radiation conditions that would have existed back then, it wasn’t possible for the young solar system to create the ratios of hydrogen and deuterium that scientists observe in Earth’s oceans and on comets. Because of that, the researchers estimate that anywhere between 7 and 50 percent of Earth’s water had to have come from the interstellar medium in which the solar system was born.

And since other solar systems would have formed in the same interstellar medium, the findings suggest that the origins of water on Earth were not unique, and that the thirst-quenching, life-supporting substance may be common on exoplanets throughout the galaxy.