Astronomers have found and confirmed the distance of a galaxy that's so far away, it shows us light from just 700 million years after the Big Bang. 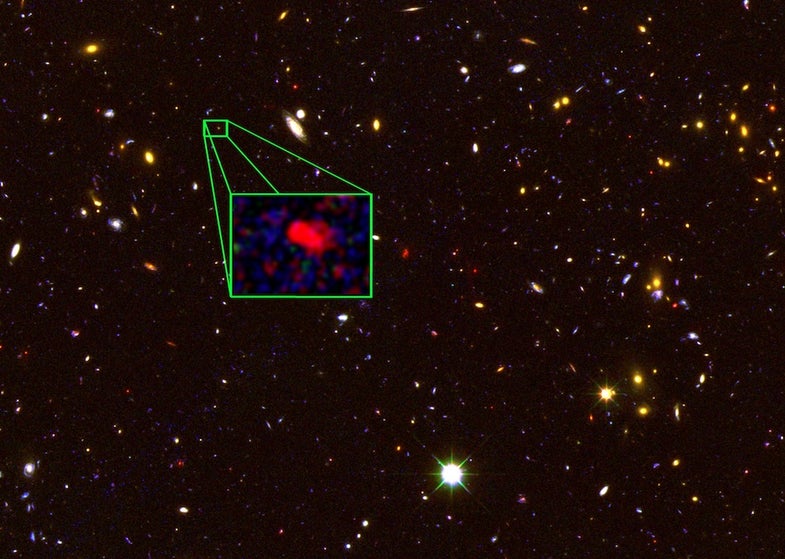 The farther away something is in space, the longer its light takes to reach Earth and Earth-orbiting space telescopes… which means super-far galaxies show Earthly scientists what they were doing billions of years ago. By looking deeper into space, astronomers gaze farther into the past.

Now, in a new analysis, astronomers have pinpointed a galaxy that’s so far away, it shows what was happening just 700 million years after the Big Bang. (We’re now approximately 14 billion years past the Big Bang.) The galaxy, called z8_GND_5296, isn’t the farthest galaxy astronomers have found. It’s redshifted 7.5—a measure of distance based on the Doppler effect—and astronomers are confident they’ve found redshift 9.5 and redshift 10 galaxies. However, z8_GND_5296 is the farthest galaxy to pass a certain test confirming its distance from Earth. It also seems to show just the right age to reveal what happened at a certain milestone in the universe’s history.

‘Spectroscopic confirmation is the gold standard’

One cool thing about galaxies this far away: Just as vampires aren’t supposed to show up in mirrors, super-far galaxies don’t show up in instruments that measure visible light. However, they (the galaxies, not the vampires) do appear in sensitive infrared light instruments. That’s because they’re so far away, the light they emit is stretched to wavelengths longer even than visible light.

For this study, a team of astronomers from the U.S., Israel and Italy gathered evidence about z8_GND_5296’s distance in addition to its appearance in infrared. In astronomical parlance, the team “spectroscopically confirmed” the galaxy’s distance. “Spectroscopic confirmation is the gold standard” for a measuring a universe’s distance, the study’s lead researcher, Steven Finkelstein, tells Popular Science.

Finkelstein’s team also used data from the galaxy and others nearby to hypothesize that the time period it’s showing corresponds with a time when the neutral hydrogen gas that filled much of the early universe became ionized. Their data help pinpoint when the Epoch of Reionization occurred.

It is still possible z8_GND_5296 is not as far away—nor its light as old—as it seems. All of the data astronomers have gathered about it so far also fits into the hypothesis that it’s redshifted 1.8. A second piece of spectroscopic evidence would eliminate that possibility, but that second line would be nearly impossible to find, astronomer James Dunlop tells Popular Science. Dunlop is an executive director of the Cosmic Assembly Near-infrared Deep Extragalactic Legacy Survey from which Finkelstein’s team drew its data, but Dunlop didn’t work directly on Finkelstein’s study. In the future, further confirmation of z8_GND_5296’s distance may come from the James Webb Space Telescope, which has more sophisticated infrared instruments.

‘This is a teenage galaxy’

The two outside researchers Popular Science contacted, Dunlop and Robin Ciardullo of Pennsylvania State University, say they think it’s likely z8_GND_5296 is redshift 7.5, not 1.8. Dunlop says the data in Finkelstein’s new paper is solid and trustworthy, no matter which explanation astronomers believe is more likely. The solidity of data around super-far galaxies has been a problem before. Dunlop recalled another paper, published in the journal Nature, that reported less convincing spectroscopic data about a redshift 8.3 galaxy. Nature later retracted the paper.

Finkelstein found a couple of other fun things about z8_GND_5296. It makes stars at a high rate, the equivalent in mass to 300 suns a year. The Milky Way, on the other hand, only makes one or two sun-masses’ worth of stars a year. The far galaxy also contains a low, but not zero, fraction of elements that would have formed some time after the Big Bang, indicating that as early as it is in the history of the universe, it’s not in the first generation of galaxies. “This is a teenage galaxy,” Dunlop says.

Finkelstein and his colleagues published their work today in Nature.