A morphable black monolith certainly looks cool, but it's not going to be very helpful.

When humans finally set foot on an alien world, they’ll be joined by robots. That’s not a bold prediction. It’s a statement of the obvious. Machines have already beat us to Mars and proven their worth as tireless scouts, surveyors, and sample collectors. A manned expedition will no doubt include at least one bot, if not a whole fleet of them.

What’s less obvious, though, is the form these robots will take. Some might take familiar shapes, like wheeled or tracked rovers, or a flock of microsatellites that can provide useful aerial footage. But what about robots assigned to work directly with astronauts, moving safely and helpfully within the same vehicles and environments as their human masters? Would they be humanoids, like NASA’s present-day experimental bot, Robonaut 2, which is currently being tested aboard the International Space Station? Or would they be more alien themselves, with bodies and behaviors that support humans, without physically mimicking them?

In the upcoming movie Interstellar, we see the latter option. The robots that accompany a manned expedition to another world are monolithic space oddities, rectangular slabs whose plank-like segments can decouple and rotate to pull off a variety of actions. The trailers offer brief examples, such as bipedal walking and a flailing sort of cartwheel across the surface of a body of water.

The bots are called TARS and CASE. They are beautiful, eye-catching designs. They’re also pretty ridiculous.

The movie’s director, Christopher Nolan, has shared very little about the robot’s design, telling Empire that it’s quadrilateral, and that, “you’ve got four main blocks, and they can be joined in three ways.” It’s a visually arresting approach, and one with no real-world precedent. Therefore, there’s no basis for praise or abuse, in terms of predicting where robotic locomotion is headed. And hey, cool robots look cool, which is more than good enough for Hollywood.

Still, there’s plenty that’s silly about this design when it comes to the field of collaborative robotics, or co-bots, which can function alongside humans without causing confusion or injury.

The go-to example of the state of the art in co-bots is Baxter, a two-armed robot laborer from Massachusetts-based Rethink Robotics that can be taught to perform menial, repetitive tasks—such as grabbing specific parts from a conveyor belt. Best of all, Baxter isn’t going to kill you, the way that some industrial robotics might if you were to wander past the safety measures that keep auto-assembly bots separated from their human co-workers. Baxter is, above all things, social and safe. And while Baxter isn’t exactly space-worthy, its two best features are worth considering for the planetary explorers to come. 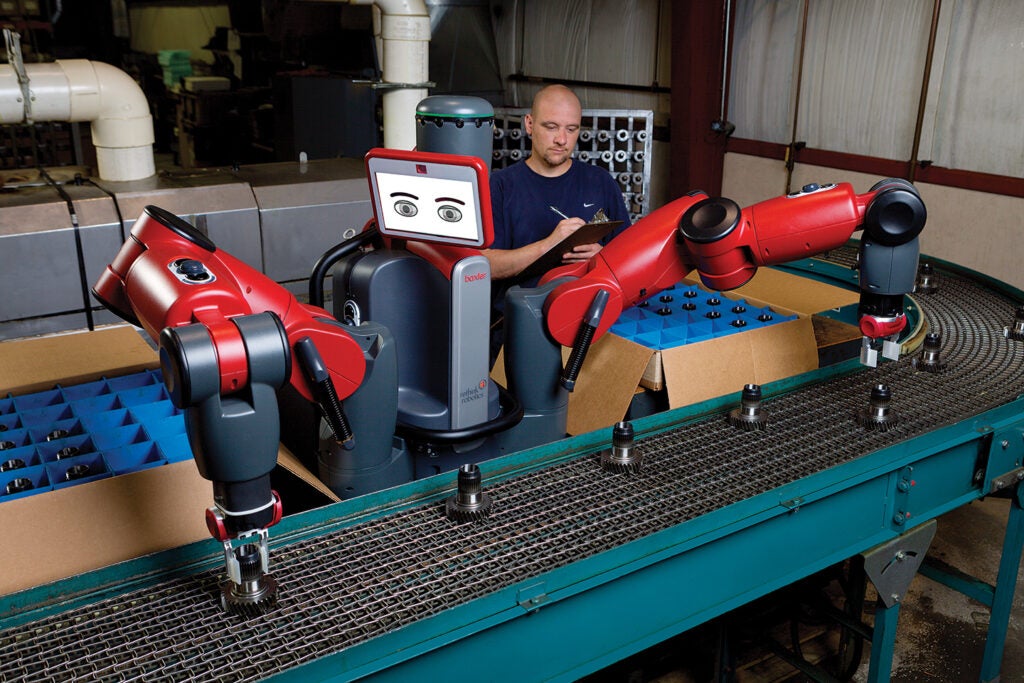 The Importance of Appearing Earnest

Baxter is one of the most expressive robots on the planet. By adjusting its on-screen eyebrows, the tablet-like face can instantly signal confusion over a command. And by turning that face on its stalk-like, articulated neck to face you, Baxter provides the unspoken confirmation that this machine is listening to you, or waiting for your next order, or even acknowledging your approach. Baxter doesn’t speak, but it communicates in ways that most robots can’t.

This is a crucial feature for a co-bot, and the differentiating factor between a robot that works effectively alongside people, and one that simply invades your personal space. “Let’s say you have a robot that listens to voice commands,” says Dmitry Berenson, a roboticist at Worcester Polytechnic Institute who works with collaborative robotic systems. “If it doesn’t seem to acknowledge what you said, people are going to get confused.” Imagine a human who doesn’t answer a request with a verbal confirmation, or thumbs up, or even the tiniest of nods. With fewer social skills and hardware than most humans, an unresponsive co-bot can quickly become a source of frustration and a less efficient collaborator. “Sometimes, the usability of the robot depends on how well you can interact with it,” says Berenson.

Now imagine a robot whose job is to pitch in during emergencies on some remote celestial body, where a single slip-up could kill an explorer. A system that requires an audible verbal exchange, and possibly even a direct communications link, doesn’t inspire much confidence as a co-bot. As Berenson points out, expressivity doesn’t mean creating a cutesy humanoid or eerily life-like android. Baxter makes do without a nose, mouth, or voice. Jibo, the social robot designed by MIT roboticist Cynthia Breazeal, has stunned backers and the greater robotics community with its non-anthropomorphic, icon-based interaction, using colors and shapes to quickly connect with users (It’s racked up $2.2 million in funding on Indiegogo.). As slick as Interstellar‘s bots look, a perpetual poker face isn’t an asset for any co-bot, much less one you have to interact with through a space suit. 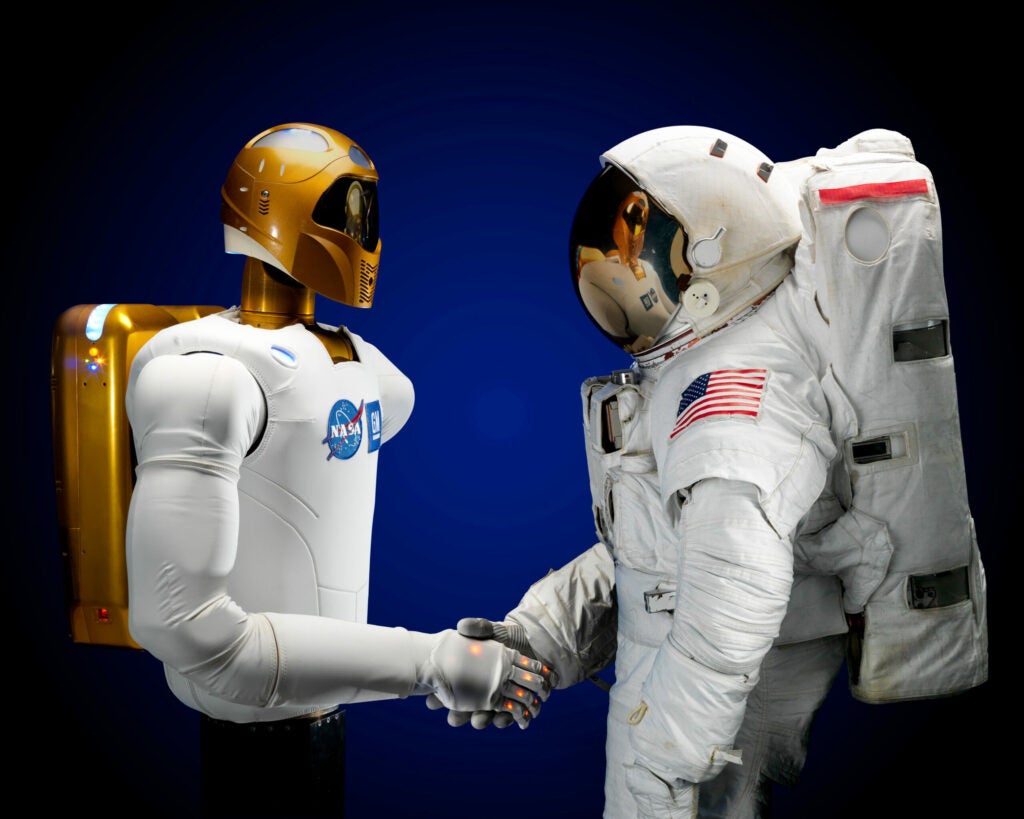 Robonaut 2 shakes the hand of a fellow astronaut.

Baxter’s other standout feature is safety. The robot’s actuators are built to yield. In training mode, you can physically walk it through its assigned task, guiding its limbs throughout the workspace. During standard operations, Baxter’s limbs will still move when pushed on. In fact, Baxter stops moving as soon as it detects an approaching human, to further minimize the risk of accidental collisions.

This level of caution is smart for a manufacturing bot, but probably overkill for a full-fledged co-bot, particularly one designed to assist astronauts. According to Berenson, the more compliant a robot’s actuators are, the less precision and strength they’re capable of. If a space co-bot is intended to fill in for humans, punching away at tightly spaced buttons and controls, its limbs and motors might have to exert more force and yield less than Baxter’s. Likewise, a bot with enough power to walk, swim, and be of any use to planetary explorers probably shouldn’t be all that compliant.

“You don’t want sharp angles around people in space suits.”

What a space co-bot should be, however, is squishy. Robonaut 2 has hard components, but its limbs are padded and self-contained, with no exposed joints to crush errant biological fingers. A thoroughly soft robot, like the gas-powered systems demonstrated by researchers at MIT, would likely fall on the wrong side of compliance vs. power tradeoff. But the bots in Interstellar are on the opposite end of that spectrum and appear to be something of a co-robotic menace. “You don’t want sharp angles around people in space suits,” says Berenson. “That could cause a problem. Having softness is just good practice for most robots. There’s not much of a reason not to have a little padding.”

Until we know when and where humanity is headed, it’s impossible to sketch out a complete design for the space co-bots to come. In fact, with all due respect to Baxter, we have yet to produce a co-bot on Earth—a robot that freezes when you come near isn’t much of a collaborator. But it’s safe to say they’ll be nothing like the stark, featureless bots in Interstellar. They’ll be expressive, ready to communicate in obvious as well as subtle, non-verbal ways. And they’ll be soft to the touch, prepared to execute orders in close quarters, without accidentally crushing or killing the very people they were built to assist.