What Will It Take To Find Life Elsewhere In The Universe?

The Hubble and James Webb space telescopes won't find life beyond the solar system. With funding and support, here's what might. 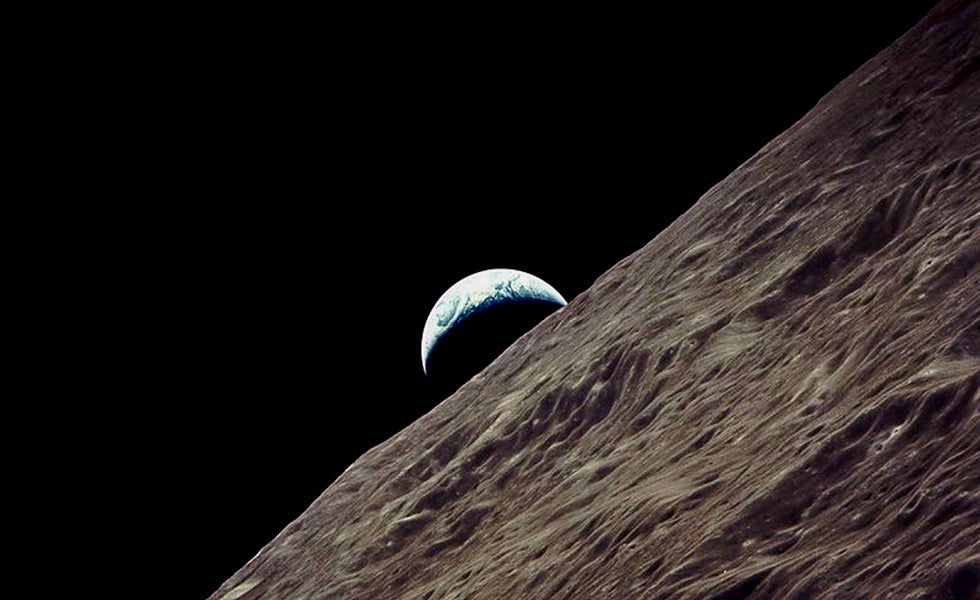 The sky was hazy and overcast above Cape Canaveral, Florida, on the morning of July 8, 2011. A light breeze from offshore cooled off an estimated 750,000 onlookers braving the sticky summer heat to say goodbye to NASA’s space shuttle Atlantis. It was the final flight of a thirty-year-old spaceflight program—and the uncertain opening of an era in which humankind may find living worlds among the stars. 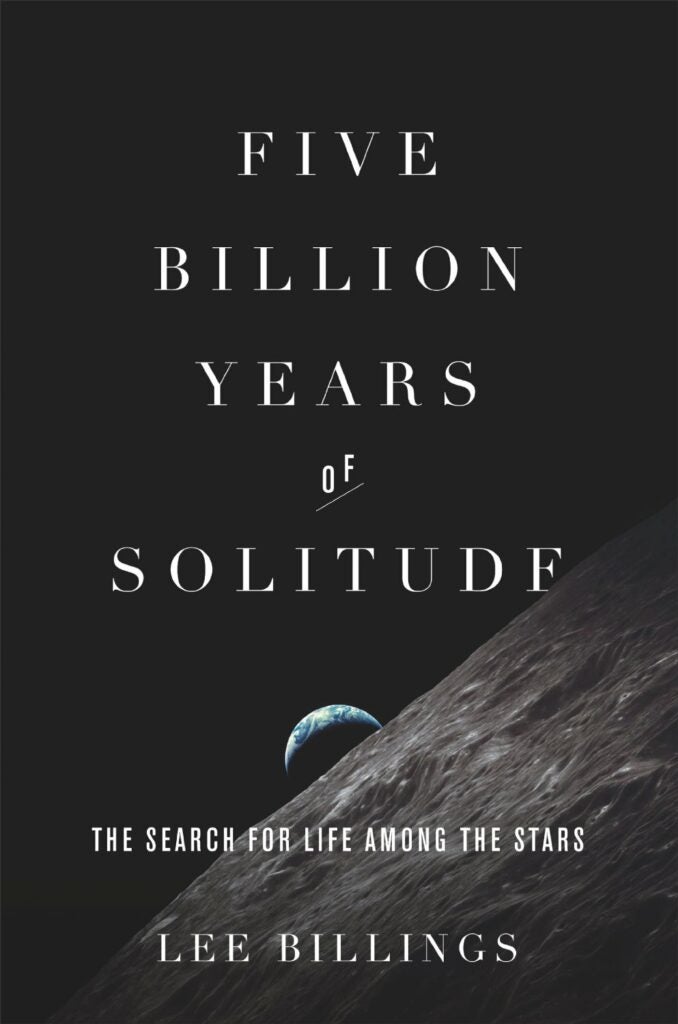 Five Billion Years of Solitude: The Search for Life Among the Stars, by Lee Billings, is available on Amazon.

As the final countdown commenced, Chris Ferguson, the spacecraft’s commander, contemplated the program’s end with the mission’s launch director, Mike Leinbach. “The shuttle is always going to be a reflection of what a great nation can do when it dares to be bold and commits to follow-through,” Ferguson radioed from his seat astride the eighteen-story-tall, 4.5-million-pound shuttle stack. “We’re not ending the journey today, Mike, we’re completing a chapter in a journey that will never end.”

Ferguson, like many before him, was echoing the core sentiment of the reclusive philosopher Konstantin Tsiolkovsky, the father of modern rocket science. While Orville and Wilbur Wright pioneered powered flight at Kitty Hawk, Tsiolkovsky wrote passionately from a remote log cabin in Russia about space exploration and a human destiny amid the stars. He theorized about launching multistage rockets into orbit, living and working in outer space, and someday escaping the solar system. He also famously devised what is now known as the “rocket equation,” a mathematical formula that encapsulates all the key variables affecting a rocket’s maneuvers. “The bulk of mankind will probably never perish, but will just keep moving from sun to sun as each becomes extinguished,” Tsiolkovsky wrote in an early paper, laying out the visionary impetus behind his work. “There is thus no end to the life, evolution, and improvement of mankind. Man will progress forever. And if this be so, he must surely achieve immortality.” This vision of an unbounded future beyond Earth, while implied but rarely explicitly acknowledged, remains the purest and most noble purpose behind any human space program.

Moments after Ferguson channeled Tsiolkovsky at Cape Canaveral, the shuttle’s engines and rocket boosters surged and crackled to life. Atlantis pushed her crew skyward on a quivering cataract of golden flame and electric-blue shock diamonds. The grand spectacle, however, left behind a space program fallen into quiet decay: NASA lacked a ready replacement for the shuttle fleet and was scaling back programs across the entire agency.

The space shuttle, conceived in the technological ferment of the Apollo missions, was supposed to be a revolutionary, reusable spacecraft that would fly once a week. It would make space travel cheap, frequent, and routine. Instead, President Richard Nixon balked at the projected expense, and the chimeric vehicles that finally emerged were elegant, versatile, and irreparably flawed. In nearly every aspect—cost, frequency, reusability, and safety—the shuttle program was a ruinous white elephant that failed to deliver on its most crucial promises.

The lone exception was arguably the Hubble Space Telescope, a school bus–size robotic observatory that space shuttle Discover delivered into low Earth orbit in 1990. After an audacious repair job in space, Hubble began paying off. Its view was sharp enough to discern changing weather on Mars, explosive comet impacts on Jupiter, and Saturn’s ghostly polar aurorae. Gazing out to nearby star-forming regions, the telescope spied young stars cocooned in swirling disks of gas and dust that were building planets. Hubble conclusively showed that the Andromeda galaxy would collide and merge with our Milky Way in about four billion years. And, inspecting surrounding galaxies, it found that nearly all of them had supermassive black holes at their centers. 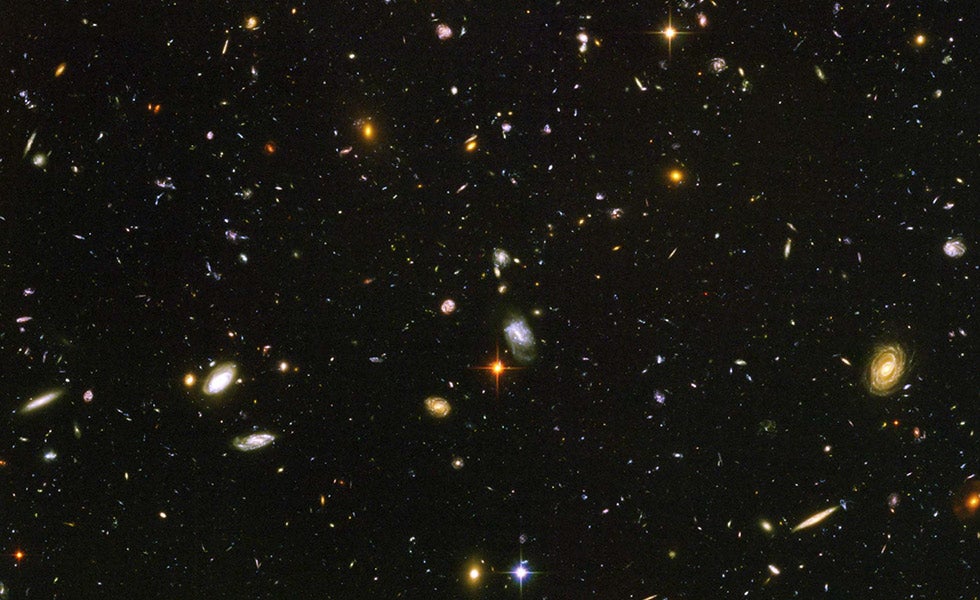 In the fruitful years that followed Hubble’s launch and repair, NASA announced its successor: the Next Generation Space Telescope, later renamed the James Webb Space Telescope (JWST). Its mission would be to fully unveil the universe’s very first galaxies, the objects that manifested only as tiny red blobs in Hubble’s deepest images.

But just as NASA threw its weight behind JWST, the field of exoplanetology began its meteoric rise. Astronomers could for the first time rationally discuss the possibility of finding other Earth-like planets, to considerable public interest and acclaim. Over interstellar distances, the planet hunters calculated, our world would appear slightly fainter than a typical galaxy in a Hubble deep field image. In theory, that would be something JWST could detect, and indeed the telescope would excel at imaging hot young gas-giant planets far from their stars. But in practice, habitable planets would lie far too near their much brighter host stars.

At an early 1996 meeting of the American Astronomical Society in San Antonio, Texas, NASA’s then-administrator, Dan Goldin, took the stage. He presented an alluring vision of what the agency would do immediately after JWST: reshape NASA’s entire science program around astrobiology, with new life-finding space telescopes as the glittering centerpiece. “About ten years from now,” he explained, the agency could be ready to launch a “Planet Finder,” an observatory that would locate potentially habitable worlds and take their low-resolution pictures. It would look for atmospheric biosignatures in the spectrum of each small clump of planetary pixels. This was one of the earliest public mentions of what would become NASA’s “Terrestrial Planet Finder” (TPF) mission concept. If a TPF found promising worlds around nearby stars, Goldin told his rapt audience, then “perhaps in twenty-five years” even more ambitious telescopes could be built that could image those planets “with a resolution to see ocean, clouds, continents and mountain ranges.” Sometime in the twenty-first century, he later said, those revealed as living worlds could become prime targets for robotic interstellar probes. 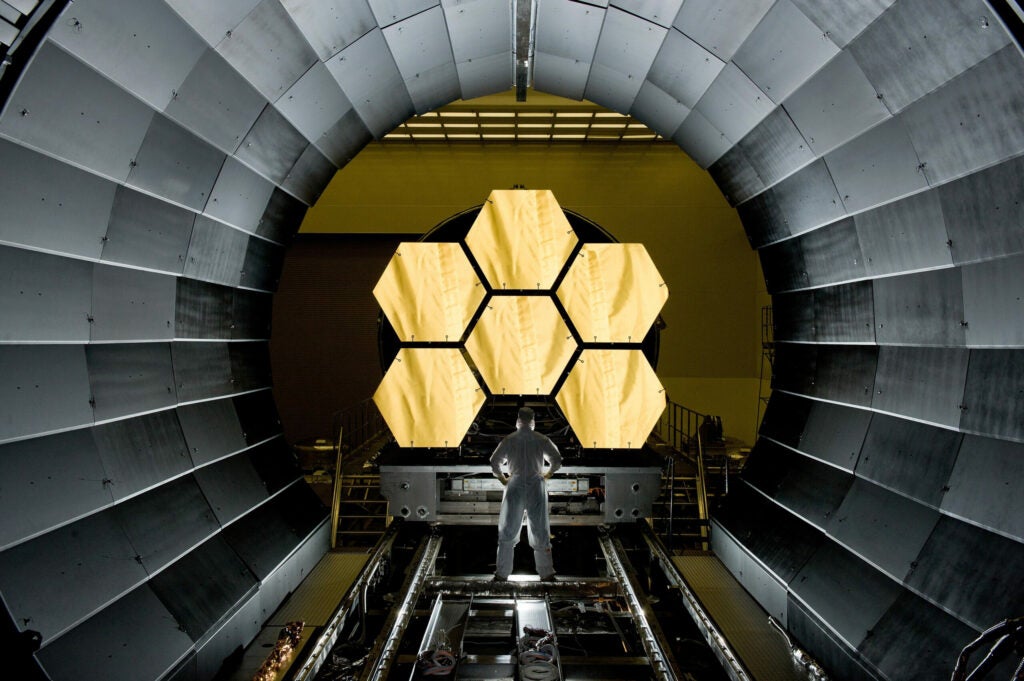 The gold-plated mirrors of the James Webb Space Telescope.

Unfortunately, JWST’s development proved more difficult than planned. To image the earliest stars and galaxies, the telescope would need a much larger primary mirror than Hubble’s, one optimized for the infrared wavelengths (where molecular clouds, giant planets, and the earliest galaxies shine the brightest). The mirror would need to neatly fold up inside a rocket fairing. In space, it’d require cryogenic cooling so that its own internal heat would not wash out the fragile light of cosmic dawn. Finally, it could not operate in low Earth orbit, because the light-bulb-like glow of our planet at infrared wavelengths would contaminate the delicate observations.

Various international partners signed on to construct instruments or to provide a launch vehicle, but NASA would bear the brunt of the cost, which early estimates pegged at approximately $1.5 billion. Launch was tentatively scheduled for circa 2010. As the project’s true complexity and scale became clear, cost estimates were revised ever upward, but little in the way of boosted funding appeared. Instead, money for JWST would have to come from NASA’s other space-science programs. In the end, more than $2 billion would be required for technology development alone. JWST’s schedule began to slip. The project’s total cost shifted more and more major expenditures into the future. By 2012, JWST’s construction, testing, launch, and first five years of operation were estimated to cost nearly $9 billion, with a launch date no earlier than 2018.

National and global economic calamities exacerbated JWST’s birthing pains. NASA’s budget plateaued and did not keep up with monetary inflation. A trillion-dollar surplus built up in the 1990s under President Bill Clinton became a multitrillion-dollar deficit in the 2000s under the tax cuts and runaway spending of his successor, President George W. Bush. Then, after the Columbia shuttle disaster in 2003, Bush delivered a bold new mandate but without funding or deep Congressional support: return to the Moon and to deliver humans to Mars.

To pay for the ultimately doomed program, called Constellation, NASA in 2006 chose to siphon billions of dollars from its science budget. JWST’s development fell into disarray and dashed hopes for a prompt development and launch of a TPF, which was officially “deferred indefinitely.” President Barack Obama in 2010 canceled Bush’s plans, but the damage was done. To adequately fund JWST, the agency scaled back, delayed, or canceled nearly all its other major next-generation astrophysics and planetary-science missions; if the observatory was to succeed, it could only do so at the great expense of eliminating most of NASA’s space-science portfolio. For want of money and strong institutional support, a TPF seemed almost as far distant and out of reach as the stars themselves. 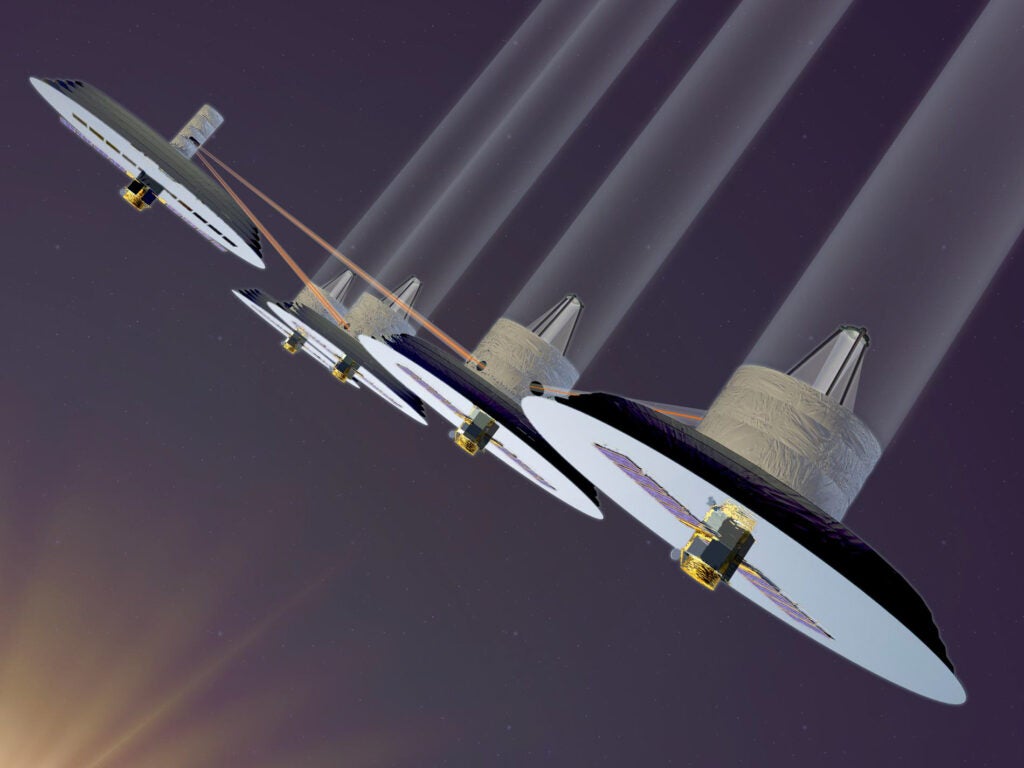 The thought weighed heavy on John Grunsfeld, an astrophysicist and NASA astronaut who had flown on five space shuttle missions, three of which to service Hubble. The press hailed Grunsfeld as a hero, and called him “Dr. Hubble.” He mulled over the hundreds of billions of dollars spent on the ISS and the shuttles, and the comparative sliver of funding required to sustain the golden age of space telescopes. He wondered how NASA’s brawny human exploration program might once again forge a powerful partnership with the agency’s purely scientific side. So, during 2003 and 2004, he served as NASA’s chief scientist and helped develop science applications for Bush’s Constellation program. Big rockets, it turns out, are just as useful for launching extremely large telescopes as they are for hurling astronauts toward the Moon. Such a rocket might make launching JWST and conceivably larger TPF-style observatories easier and cheaper. The planning backfired, however, when Constellation cast its hungry shadow over NASA’s science budget. In early 2010, Grunsfeld left NASA to serve as deputy director of the Space Telescope Science Institute in Baltimore, Maryland—the pulsing nexus of operations for Hubble and, someday, for JWST. He worked closely with the institute’s director, the astronomer Matt Mountain, for nearly two years to lay the groundwork for a future TPF-style telescope. Their preferred in-house design was aptly named ATLAST, the Advanced Technology Large-Aperture Space Telescope, and was intended to deliver images of potentially habitable exoplanets. Dr. Hubble had become Dr. TPF, Dr. ATLAST.

But in late 2011, Grunsfeld’s phone rang. NASA wanted Grunsfeld at the helm of the largest pure science budget in the world, albeit one struggling to meet all its myriad obligations. He accepted, and upon returning tamped down his past vocal advocacy for life-finding space telescopes in favor of emphasizing balance across all of NASA’s science programs. There was no announcement of bold new funding to search for alien Earths, but Grunsfeld’s closest friends and former confidants could not forget his former fervor. After nearly a year’s worth of fruitless exchanges with NASA in attempt to speak with Grunsfeld for this book, I took solace in what he had freely told me during an earlier interview.

“Hubble and Webb will probably leave us hanging on the question of whether there is life elsewhere in the universe,” he said. “What we need in the next generation of great space telescopes—and what we can achieve—is the capability to observe the atmospheres and surface features of every single habitable planet around the nearest thousand stars. We could finally find out we’re not alone. We could finally find other habitable worlds, each of which, in principle, could be visited by humans. That’s the big picture, and I want to be able to convince the public and the Congress and the future administrations that it’s worth investing in this next step.”

Clearly, Grunsfeld had read his Tsiolkovsky.

Adapted from _Five Billion Years of Solitude: The Search for Life Among the Stars by Lee Billings with permission from Current, a member of Penguin Group (USA) LLC, A Penguin Random House Company. Copyright © Lee Billings, 2013._