Our Closest Neighboring Star Has A Rocky, Earth-Sized Planet In Its Habitable Zone

Now to figure out if it has liquid water. Or an atmosphere. 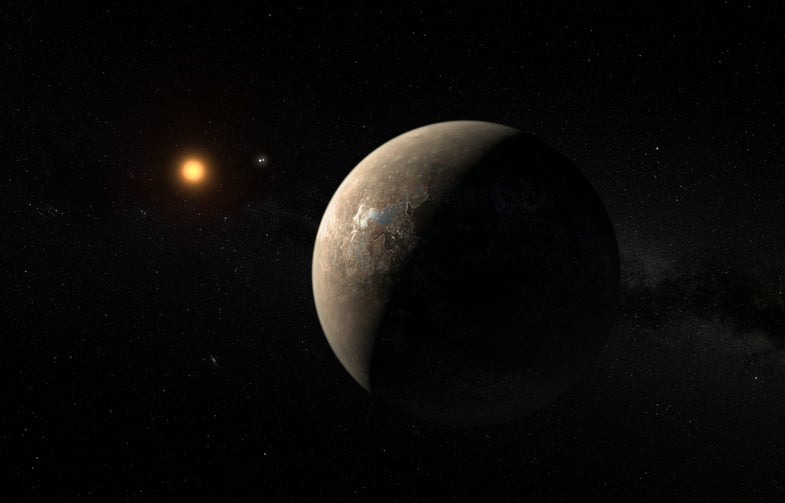 Hey neighbor! Our lonely patch of the sky just got a little less lonely with the identification of a rocky, Earth-sized planet neighboring the star closest to our own Sun.

In a paper published today in Nature, researchers announced the exciting news that they had positively identified a planet about 1.3 times the size of Earth orbiting the red dwarf star Proxima Centauri 4.2 light years away.

The researchers made the observation by observing the star carefully over long periods of time. They found that once every 11.2 days, the light from the star shifted ever so slightly, a variation called a Doppler shift, during which the star appeared to be moving towards Earth slightly and then away from Earth slightly. That wobble indicated the presence of a planet.

Researchers have been looking for exoplanets at Proxima Centauri for years, but it took a long time for researchers to confirm that it was a planet, and not some other kind of interference, like sun spots on Proxima Centauri, which might look similar from our Earth-bound vantage point.

“Once we had established that the wobble wasn’t caused by star spots, we knew that that there must be a planet orbiting within a zone where water could exist, which is really exciting. If further research concludes that the conditions of its atmosphere are suitable to support life, this is arguably one of the most important scientific discoveries we will ever make,” said John Barnes, a co-author on the paper.

But its closeness to us in distance and size isn’t the only thrilling thing about the discovery. The researchers also pointed out that the planet orbits the star in an area that might be considered habitable. If Proxima b has managed to hang on to an atmosphere and liquid water, it might be hospitable to life.

There is no guarantee that the planet has either an atmosphere or water. Proxima b orbits Proxima Centauri every 11.2 days at a distance of 4.66 million miles, or about 5 percent of the distance between the Earth and the Sun. For comparison, Mercury orbits the sun at an average of 35.98 million miles.

If Proxima Centauri were like the Sun, the short distance between the two would be enough to at least fry the planet’s surface. But Proxima Centauri is a much dimmer, smaller star. And at that distance of less than five million miles, the researchers estimate that the planet would get about 65 percent of the radiation that the Earth receives. Without an atmosphere, the temperature on Proxima b would be about -40 degrees Celsius.

That’s really cold, but if Earth didn’t have an atmosphere, our planet would be a chill -20 degrees Celsius. So, we can’t really talk. The distance is close enough that if the planet managed to hang onto an atmosphere, it could potentially support water in a liquid state. That’s if the planet formed in such a way that water in the protoplanet didn’t just vaporize in the early solar system, or if it had water delivered to it by comets later in its life.

If you’re noticing a lot of ‘ifs,’ that’s because a lot is still unknown about our new neighbor. While computer models suggest that the planet could hold water or an atmosphere, or even a magnetic field, which would help deflect deadly radiation from the planet’s surface, there is no evidence yet of any of those things. 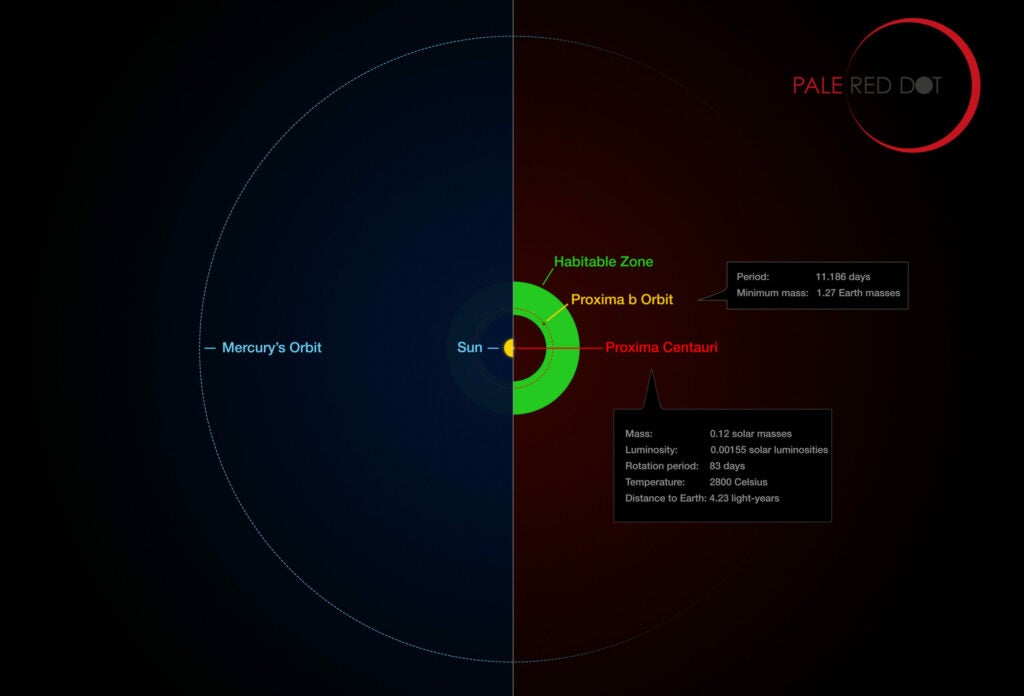 A comparison of our Solar System and the Proxima Centauri system.

And even if the planet once supported an atmosphere, there’s no guarantee that it’s still going to be there. It’s possible that when Proxima Centauri was more active, the star could have blown away Proxima b’s atmosphere early on in its development. We won’t know more until new data comes in from other observations, and potentially even future telescope and other missions to study Proxima b.

Heading out to Proxima Centauri for a visit might take some time. While it is the closest star, 4.24 lightyears is still a very long way, and getting there would take thousands of years with our current technology. (Although billionaire Yuri Milner thinks we could send tiny, laser-powered spacechips there within a few decades.)

In the meantime, until we can develop warp drive or some other awesome tech that would allow us to launch a robotic or manned mission to Proxima b, we will have to content ourselves with telescope-based observations of the planet, and rely on those observations and models to tell us more about what our closest neighbor really looks like. 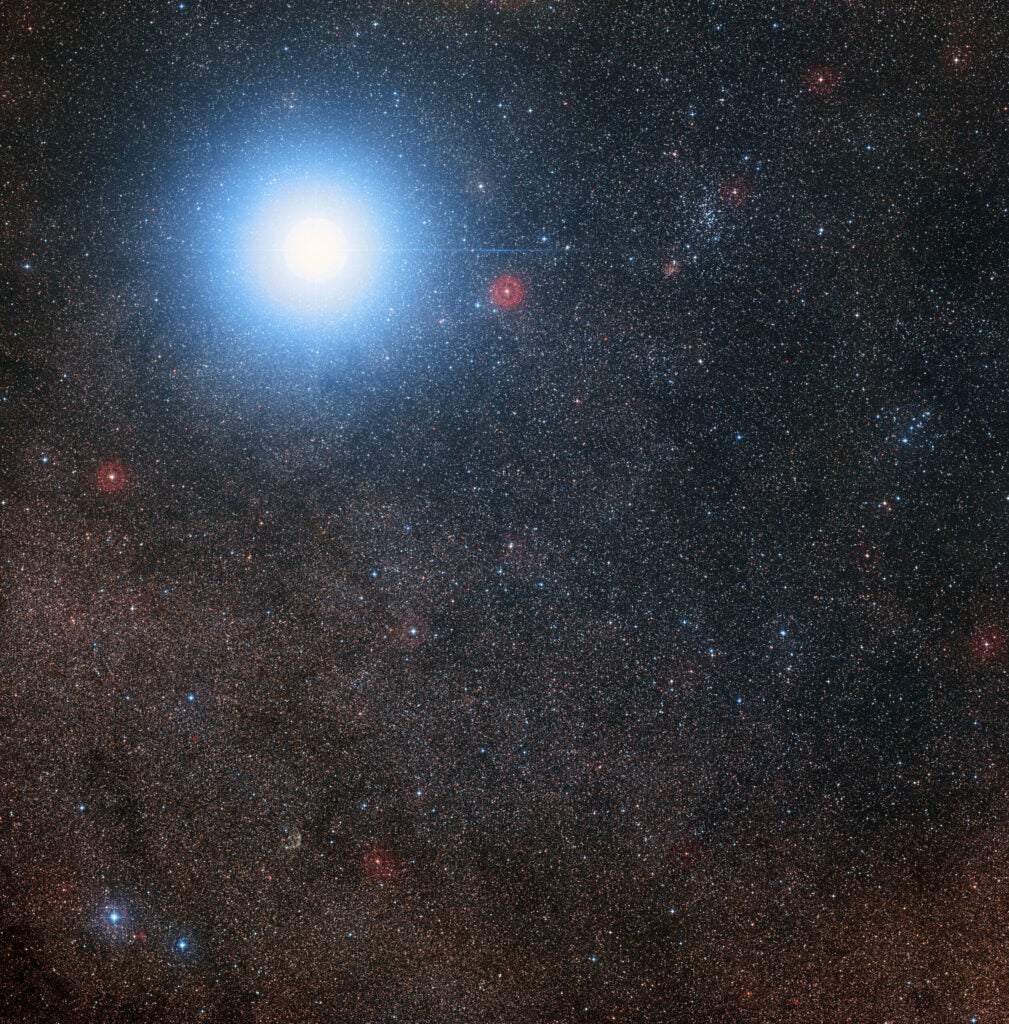 The large blue star near the top is actually a two-star system called Alpha Centauri AB. Nearby is the red dwarf Proxima Centauri 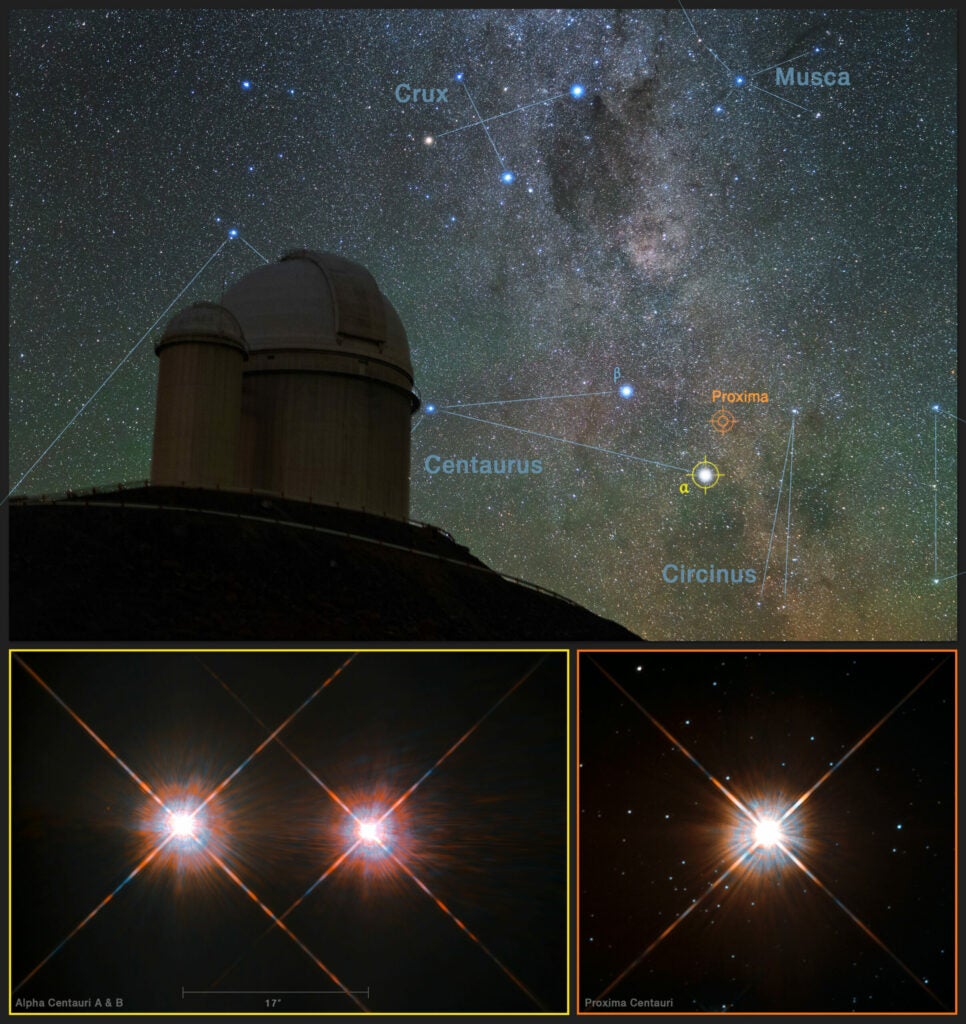