Jupiter's moon is the best candidate for finding extraterrestrial life; here's how we're going to get there 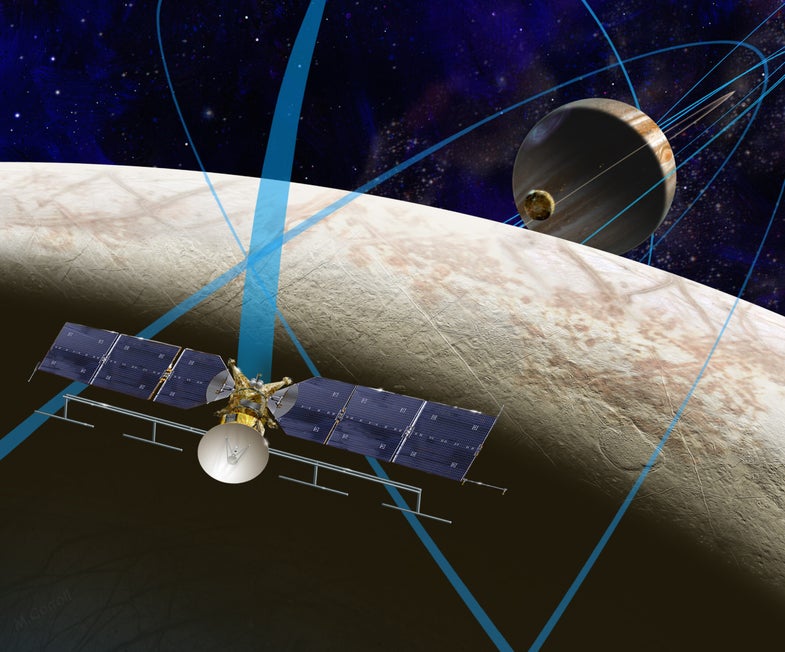 On Monday, NASA Administrator Charles Bolden gave an exciting update on the state of America’s space agency, detailing the Obama Administration’s proposal to give NASA $18.5 billion for the 2016 fiscal year. Embedded in that budget is a small—yet significant—detail: About $30 million will be allocated to fund a robotic mission to Jupiter’s moon Europa.

For the scientific community, that’s huge news, as Europa is probably the top candidate for finding potential life elsewhere in our solar system. Scientists theorize (well, they’re pretty damn sure) that underneath Europa’s icy surface, there lies a vast salty ocean, holding more than twice the amount of water as all the oceans of Earth. And if that ocean does exist, its conditions may be just right for it to be home to an entire ecosystem.

“From an astrobiology perspective, Europa really brings together the keystones for habitability.”

“From an astrobiology perspective, Europa really brings together the three keystones for habitability,” Kevin Hand, the deputy chief scientist of solar system exploration at NASA’s Jet Propulsion Laboratory, tells Popular Science. “And that is of liquid water, access to the elements needed to build life, and potentially the energy needed to power life.”

NASA has been contemplating a trip to Europa for a couple of years, and Congress recently gave the project $100 million for 2015. While the White House proposal only allots $30 million, the fact that it’s coming from the president is important. NASA is an executive branch agency, in need of White House support, and the administration’s new budget “supports the formulation and development of a Europa Mission.” That means NASA engineers can finally put their planning into action.

“They want us to move into the next phase of the mission,” says Robert Pappalardo, the Europa Clipper pre-project scientist at JPL. “So we’re moving to Phase A, where you become a real mission, not just a concept.”

What’s So Special About Europa? 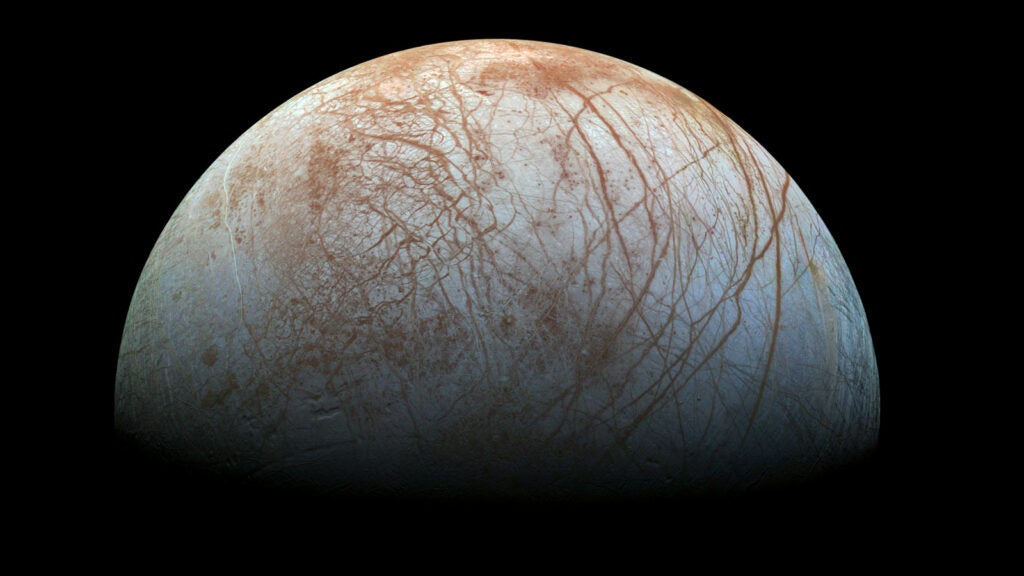 Europa is a bit of an anomaly within our solar system. The moon’s outer layer consists of an icy sheet, somewhere between 1 mile and 18 miles thick (the scientific community is divided on its depth). Due to the ice’s smooth surface and lack of impact craters, researchers believe that this layer is relatively young and active, meaning something—such as an icy, volcanic flow underneath—is constantly renewing the ice and erasing past imperfections.

This has led many experts to support the theory that there’s an ocean underneath the icy crust. The idea was further solidified in 1995 during NASA’s Galileo mission, in which a probe entered orbit around Jupiter. As it passed by the moons, the Galileo spacecraft found that Jupiter’s magnetic field was disrupted in the area around Europa. The disruption indicates that an electrically conductive fluid beneath the moon’s surface is inducing a special kind of magnetic field around the satellite. And given Europa’s icy outer shell, that substance is most likely water.

Researchers believe the bottom of the moon’s ocean likely comes in contact with a hot rocky mantle surrounding Europa’s core.

Europa isn’t the only extraterrestrial body in our solar system thought to house a liquid ocean, but the moon holds a number of other key properties that particularly titillate experts—notably, its constant radiation bath. Jupiter bombards Europa with intense radiation, which breaks up compounds on the ice’s surface into essential elements. “That radiation is deadly to us, but that same radiation bombarding the water, it liberates the hydrogen and leaves oxygen behind, making oxidants,” says Pappalardo. “And those are great for life.” The free hydrogen and oxygen combine with other surface materials to make important building blocks for life, including hydrogen peroxide, carbon dioxide, and more.

Along with creating these compounds, Europa may also provide the energy needed to sustain life, as well. Researchers believe the bottom of the moon’s ocean likely comes in contact with a hot rocky mantle surrounding Europa’s core. This direct interaction between the water and heated rock could be just what the planet needs to trigger the energy needed for life.”On Earth’s ocean floors, the interior is hot, and the water comes in contact [with the heated rock below], and that water gets charged,” says Pappalardo. “There’s chemical energy there, and those areas are teaming with life.”

If the compounds from Europa’s surface are warmed by the energetic ocean floor below, the combination could spark the growth of aliens right here within our solar system.

How To Go To Europa 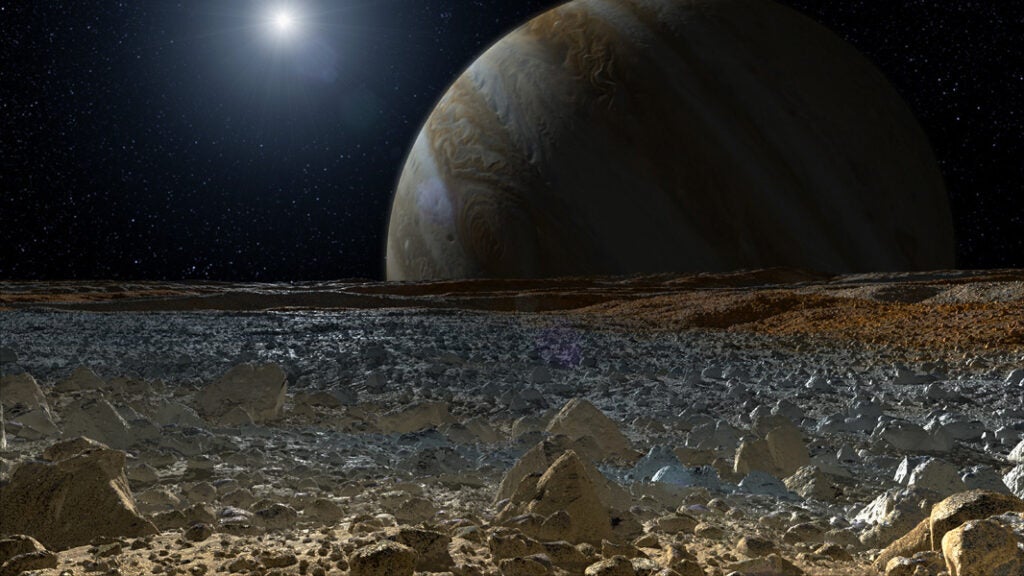 Of course, all of these features of Europa are purely hypothetical. NASA has no direct evidence of an ocean, but engineers at the space agency are really eager to verify that it exists. Now, with the most recent announcement from the White House, they will finally get that chance.

NASA has been mulling over different ways to get to Europa for years, but finding the right method has been difficult. Because of the high radiation environment surrounding the moon, sending a spacecraft into orbit would require a lot of extra hardware and heat shielding to protect the vehicle from all the charged particles. And that adds up cost-wise. One scrapped idea to visit Europa along with two other Jupiter moons was estimated to cost $27 billion.

“Some ideas have been too small, some too big, some too expensive,” says Pappalardo. “Now we think it’s just right.”

The idea moving forward is the Europa Clipper mission. Rather than send a probe into constant orbit around Europa, NASA wants to send a spacecraft to “clip” Europa, performing 45 flybys of the moon over a long period of time. “Most of the time we’d be far from Europa and Jupiter, then we’d swoop in every couple of weeks, gather lots of data and then get out,” says Pappalardo. “We call it a toe dip; you get your feet in the water and then run back out on the sand.”

“Some ideas have been too small, some too big, some too expensive. Now we think it’s just right.

During these flybys, the radiation-tolerant spacecraft will travel to varying altitudes above Europa and use different instruments to study the moon’s composition. Although the exact instruments for the payload haven’t been determined yet, Pappalardo says the main thing the probe will be studying is the gravitational pull on the spacecraft by Europa. This tugging and pulling can help confirm the presence of an ocean.

“If there is an ocean, Europa’s ice shell will flex by [100 feet] every time it orbits Jupiter” say Pappalardo, “…So when we encounter Europa, and it’s all stretched out, then it indicates water underneath. If there’s no liquid water, that icy shell is kind of glued to the rock below, so it’ll only flex by about 1 foot.”

Since the scientific community is pretty well convinced that an ocean awaits, Pappalardo’s team wants to go one step further and analyze what those waters are like. By equipping the spacecraft with a magnetometer, the researchers can measure the changing magnetic field around Europa, which indicates the thickness and the saltiness of the subsurface sea. Radar on the spacecraft will also determine the thickness of the outer ice shell (a topic that has divided some researchers).

Additional instruments under consideration for use include a topographic camera, a neutral mass spectrometer to sniff out Europa’s atmosphere, and an infrared spectrometer to study the composition of Europa’s surface.

Right now, Pappalardo’s team is working toward a launch date of 2022, hoping to send the spacecraft aboard NASA’s Space Launch System, the mega-rocket currently in development at the Michoud Assembly Facility. On that rocket, travel time to the Jupiter system would take just three years.

Overall, the main goal of this mission is to see if Europa is a place where life could be present. If Europa Clipper does indeed find life-sustaining conditions, the discovery could lead to a follow-up mission that look for more direct evidence of alien microbes. “All life on earth uses the DNA, RNA, protein paradigm, and so part of why we want to go to Europa is to essentially test the biology hypothesis to see if life arises wherever conditions are right.” says Hand.

If we do find life on Europa someday, the finding will change everything. It answers that all-powerful question: Are we alone? Just a few microbes on Europa mean that life is probably pretty common throughout the universe.

And if there are no traces of life on Europa, even when conditions are ideal, that too denotes a huge finding. “If the ingredients are there and there’s no life,” says Pappalardo, “then wow, life must be even more special and rare than we imagined.”