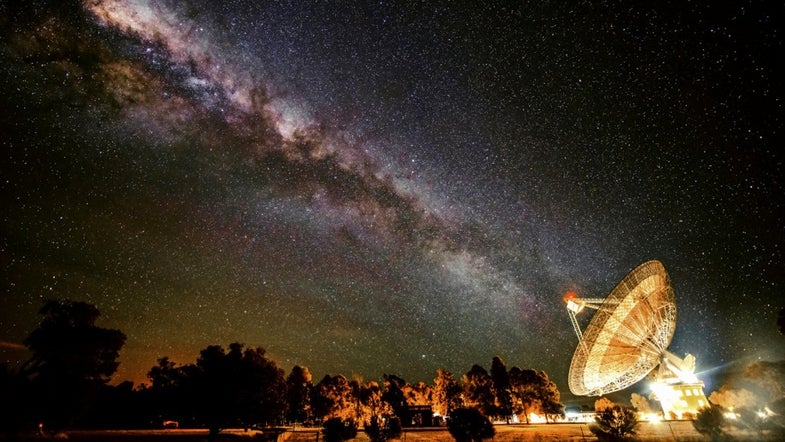 Where are all the aliens? Where are the bugs, the invasion fleets, the Tripods, the Vulcans? Humans have imagined otherworldly beings for ages, but as we’ve begun scanning the night sky for proof that we aren’t alone, we haven’t seen or heard a single extraterrestrial peep.

A new paper suggests that the eerie silence from outer space…

No, not that silence. What was I saying? Right. A new paper suggests that the reason we haven’t found any life yet is that it’s simply all gone extinct. Astrobiologists and authors of the paper, Aditya Chopra and Charley Lineweaver, make the point that, early in their formation, planets are incredibly inhospitable to life. There are volcanoes erupting everywhere, spewing gases into an early atmosphere, there are lots of meteorites smashing into the planet, and overall, life just doesn’t have much of a chance.

“Early life is fragile, so we believe it rarely evolves quickly enough to survive.”

“Early life is fragile, so we believe it rarely evolves quickly enough to survive.” Chopra said “Most early planetary environments are unstable. To produce a habitable planet, life forms need to regulate greenhouse gases such as water and carbon dioxide to keep surface temperatures stable.”

On Earth, researchers believe that life form that helped regulate the planet was cyanobacteria an early form of life that lived around 3.5 billion years ago that took in large amounts of carbon dioxide and expelled oxygen, creating an atmosphere that allowed life on earth to evolve. It was slow going at first, but eventually, enough oxygen built up to support an explosion of life during the Cambrian period, 500 million years ago. But even then, life on Earth was threatened by numerous extinction events, including the Permian-Triassic Extinction event around 250 million years ago when 95 percent of marine and 70 percent of terrestrial species went extinct.

So, it’s not hard to imagine that not all life on all planets makes it as far as life did here on ours. But the theory that aliens didn’t survive past the pond scum stage isn’t the only idea that’s out there.

Another recent study suggested that there might be a chance that Earth was simply one of the first planets to evolve intelligent life, and that if we wait a few billion year, we might finally get some neighbors in the Universe.

Either way, whether the aliens have all gone extinct, or they just haven’t evolved yet, it’s not that likely that there will be a whole lot of super-intelligent alien civilizations out there for discovery within our lifetimes.

Of course, that’s not going to stop us from looking for life. There are an abundance of projects like the Curiosity Rover, or missions to Enceladus and Titan that will continue to look for evidence of life within our solar system, no matter how miniscule. And researchers will undoubtedly keep looking for evidence of past life on other planets too.

But even if we did get to another planet that once hosted microbes recognizing evidence of past life is going to be extraordinarily difficult. Here on Earth scientists are still arguing over what a 3.5 billion year old microbial fossil looks like. Aiming to identify an alien microbe might be even harder–unlike dinosaur bones, or shells, microbes are small, soft, and easily degraded, all factors that make them difficult to preserve in rocks.

Clearly, there is only one answer. We’ll just have to start looking for alien ghosts. Like this one: