Bears in captivity provide researchers with more accessibility and data than those in the wild. 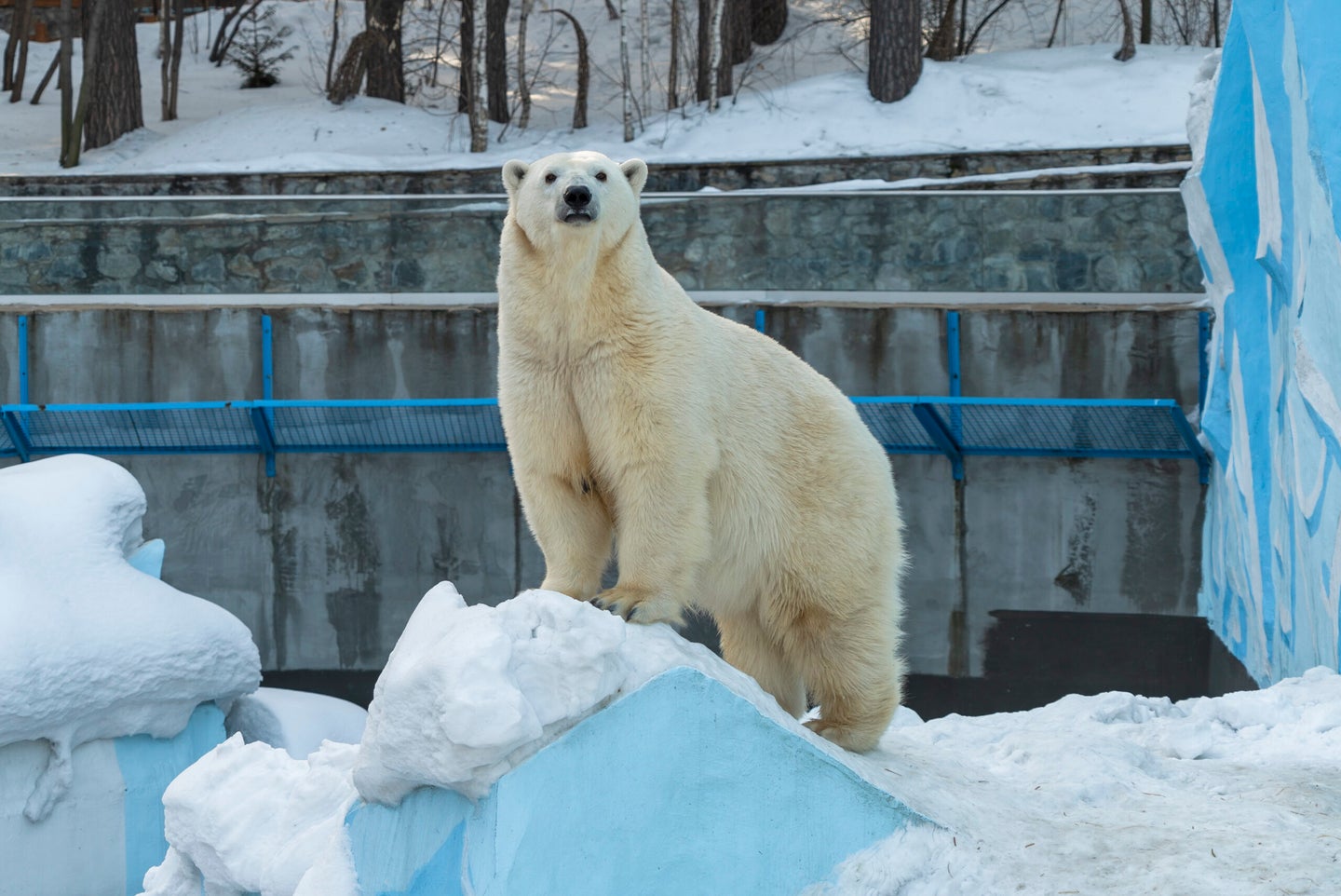 Growing up to 8 feet long and 1,700 pounds, polar bears are the largest carnivorous land mammals on the planet. Researchers have long tried to understand these enigmatic apex predators, but most wild polar bears live in hard-to-reach habitats above the Arctic Circle. Luckily, scientists don’t have to go all the way to the North Pole to find a polar bear, because chances are they can be seen at your local zoo.

While these bears kept in captivity might primarily be there for entertainment and education, much to the dismay of animal rights groups, a collective of scientists wants to study them to help save their wild brethren from the threats such as rising temperatures. Since 2018, the Polar Bear Research Council (PBRC) in partnership with the Association of Zoos and Aquariums (AZA) Species Survival Plan (SSP) has studied polar bears in captivity to help conserve them in the wild. On January 26, the PBRC published its 2022 Polar Bear Research Masterplan which outlines ongoing research and the council’s goals moving forward.

Zoos can provide researchers greater accessibility to polar bears to amass far more data than conducting studies out in the remote regions of the Arctic, says Terri Roth, co-chair of the PBRC steering committee and vice president of conservation at the Cincinnati Zoo and Botanical Garden. Wild polar bears mostly dwell in Alaska, Russia, Canada, Greenland, and Norway, where climates are harsh for humans. Their solitary lifestyle, strength, ferocity, and discomfort around humans can make it difficult or dangerous for polar bear researchers. While studying polar bear populations in the wild provides invaluable insights, expeditions are expensive and have less frequent observations. But zoos offer a convenient and data-rich alternative. Scientists can readily access bears’ full medical history and monitor their behavior 24/7 over many years.

“It’s an amazing opportunity to collect detailed data and biological samples that are only going to be collected hit or miss with wild bears,” Roth says. Obviously, bears in captivity are very different from wild bears, and this is something that researchers must take into account. However, Roth says the differences between the two populations can also be used as an advantage.

“[Captive polar bears] also can actually serve as somewhat of a control population, depending on what you’re looking for,” she says. For example, Roth and her colleagues have considered looking at wild polar bears’ exposure to certain toxins and pollutants while using some zoo bears as a control population to see what a normal baseline would look like without exposure.

However, zoos often need guidance in deciding which studies to pursue, Roth says.

“Oftentimes, it is challenging for zoos to decide which research projects they should participate in. We get inundated with requests, and our staff only have so much time,” Roth says.

The recent report acts as a third-party guide to help zoos prioritize research that the council identified is most needed by the field, Roth says. The PBRC reviews proposals from scientists and endorses the projects that address those essential areas of research, such as in-field polar bear monitoring and management techniques, physiological and behavioral ecology, and reproduction. Zoos are much more likely to participate in studies endorsed by the PBRC, Roth says.

One such study is the project “Burr on Fur,” an initiative between Polar Bears International (PBI), a supporting organization of the PBRC, and 3M to develop new technology for tracking polar bears in the wild. Currently, satellite collars that go around the neck of the polar bear are the most commonly used tracking technology. These devices allow researchers to collect data on wild polar bears’ movements and activities, such as how long they swim. However, the collars can only be placed on adult females, excluding males and juveniles from the data pool.

“Adult males’ necks are larger than their heads, they are basically cone-shaped, and the collars fall off very easily,” says Geoff York, the senior director of conservation for PBI. The researchers also can’t collar juveniles because they would outgrow the collars too quickly. There are also Indigenous groups in the Arctic that view these collars as disrespectful. Ear tags are another method of tracking wild bears, but those require punching a hole in their ear. The tags are hard to remove without injuring the bear, York explains.

To solve these issues, PBI and 3M developed several “Burr on Fur” satellite trackers that could attach to the fur of the polar bear, like how a plant burr clings onto clothes or animal coats. This way the tracker doesn’t harm the polar bear and can also stick onto polar bears of any size. So far the researchers have deployed 17 tags on wild bears in the Hudson Bay region in Canada and have tested them with polar bears from nine different zoos. The most successful tracker so far is the tri-brush tag, a triangular tracker with edges like a spiral notebook.

“Inside the spiral is essentially a pipe cleaner,” York says. “[With] our ‘burr,’ we can tangle up the fur. We can push that down onto the back of a bear, so it’s nice and snug.” Polar bears in captivity are a great test case to determine how long the trackers will stay on, says York, because they are more keenly aware of disturbances.

“[Polar bears in zoos] have fewer distractions, and so they’re much more likely to know there’s something on their back and decide if they want to do something to try to get it off,” he says. The tri-brush tags stayed on captive polar bears for about 14 days and on wild polar bears 52 days on average, York says. While PBI would like to get about six months of use out of these trackers, York says there is still a lot of data to be gleaned from 52 days, and they are still prototyping and adjusting the designs.

“There is a lot of really good science that’s going on with wildlife in zoos, and people don’t usually think of that when they think of their local zoo,” Roth says. “It’s a really good opportunity to learn about these species in ways that we can’t by studying wild populations.”