How birds of a feather flock together

The mechanics of surfing the wind—or waves. 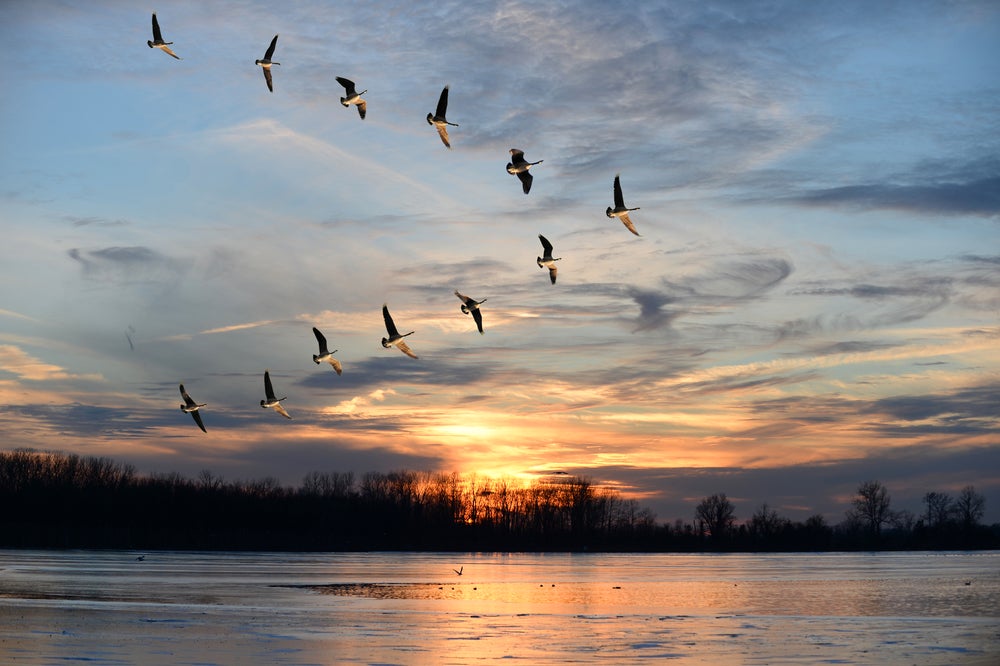 Birds of a feather flock together. But how?. Deposit Photos
SHARE

Scientists have long wondered how and why fish swim in shoals and birds fly in flocks—what’s in it for the individuals? New research from New York University helps shed some light on what benefits they derive from their formations.

Unlike, say, a peloton of cyclists that are travelling on land by pushing their tires against the ground, fish and birds are moving in a medium that’s all around them, not just below them—and they’re both doing it, basically, with similar mechanisms: what NYU Ph.D. candidate Joel Newbolt, the study’s lead author, refers to as “flapping.”

Previous work has demonstrated that “in these groups like schools and flocks, you can do things like reduce the amount of energy it takes to move through the water or through the air,” Newbolt says. These ways of traveling lead schools of fish and flocks of birds to move in characteristic shapes. The geometry may differ from species to species—a flock of starlings moves differently than a V of Canada geese—but both are deriving benefit from their flock.

In previous models of this behavior, scientists assumed that each fish or bird was flapping exactly the same way, like a group of machines. But the reality is more complicated: even though every goose in the world is different from every other goose, still somehow all groups of Canada geese fly in similar configurations.

Ironically, the researchers behind this latest study actually used machines to model flapping in a controlled setting. They positioned two hydrofoils, a lifting surface designed to cut through liquid efficiently, in a tank of water. They lined the foils up one behind the other, and “flapped” both of them in a manner that parallels the general movement of a fish’s swimming tail or a bird’s flapping wings. What they found was that the lead hydrofoil created a wake behind it that “affects the position of the follower,” according to a supplementary video published by the researchers. That wake “can even keep the follower from colliding with, or separating from, the leader.”

The experiment “shows that these configurations are very robust,” says Lehigh University’s Keith Moored, who was not involved with the current research. His lab also studies flapping. The research lends more weight to the idea that the shape of schools of fish or flocks of birds is mediated by the air or water surrounding them, he says, which exercises force on wings or fins.

But the real surprise finding was that the relationship between the hydrofoils—and the influence of the wake—remained the same regardless of variations in how they flapped. “I was actually very surprised by that finding,” says Lehigh. “It’s a completely new idea.” The thing that kept them similar was the force exerted by the water itself. In the experiments, the wake left by the lead hydrofoil dictated the relationship that the back hydrofoil maintained. It pushed the back hydrofoil away or pulled it closer.

Understanding how individual fish and birds manage to move in groups so successfully can also offer insights to the designers of alternative energy technologies like wind and water power, the team hopes. “Depending on the river speed and their spacing, you can get more efficiency in the following ones,” Newbolt says.

But even the animals remain mysterious at this point. “There’s really so much to be understood about these movements in groups,” says Newbolt.