Iridescent color isn’t always for standing out—for some creatures, it’s for blending in. 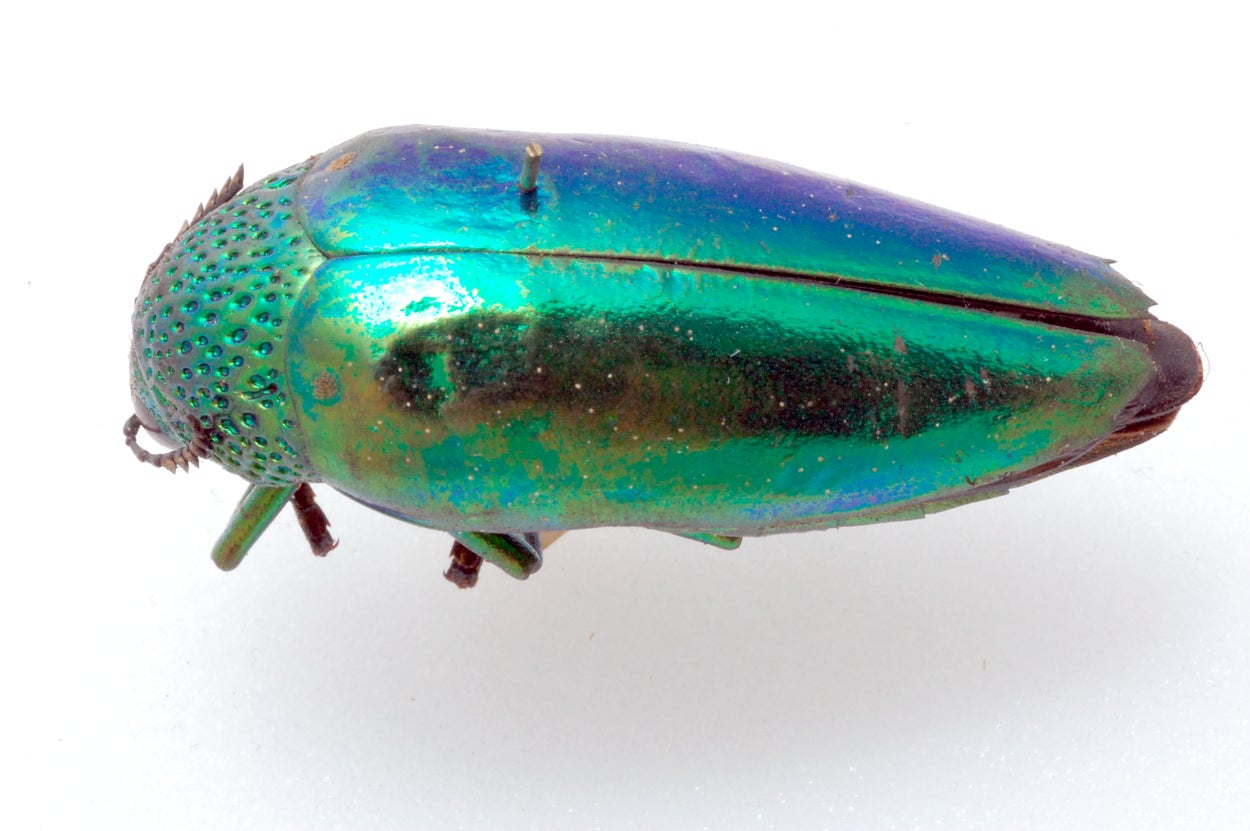 A glimmering jewel beetle seems stunning here, but it's camouflaged in the wild. Bristol Museums, Galleries and Archives
SHARE

If you’re trying to blend into a crowd or avoid an unwanted gaze, it probably doesn’t make sense to throw on your most glittery New Year’s Eve getup and strut down the street. But for some creatures, donning a sparkly array of gorgeous colors might be just what they need to go unspotted by a hungry predator.

The idea that iridescence could be a tool used by animals to hide is over a hundred years old. The “father of camouflage” Abbott Thayer hypothesized that kaleidoscopic coloring for some creatures might help them dissolve into the background. But that’s been a tricky claim to prove.

“When most people think about iridescent colors, they think about peacock tails and hummingbird throat patches, colors to get you noticed by potential mates,” Karin Kjernsmo, an evolutionary and behavioral ecologist at the University of Bristol in the United Kingdom told PopSci. “Not to hide away from actual predators.”

A study published Thursday in Current Biology led by Kjernsmo finally put some proof behind Thayer’s theory. For her work, she used Asian jewel beetles, a metallic-green beetle often used in jewelry that can be found in Southern Asian countries like Thailand. The researchers placed real, iridescent wing cases of these beetles in a natural woodland setting to see if animals would notice them compared to a control group of plain colored wing cases (which were just the jewel beetle cases covered in nail polish).

The researchers posited that the iridescent bugs were less likely than their drab counterparts to be eaten up by hungry passing birds. But to make sure that it was indeed because these bugs were blending in, not giving off a glittery warning signal, human subjects went through the same natural area they conducted their tests in, hunting down the glimmering critters.

If their shimmering colors were a warning signal, they should be pretty easy for people to spot, Kjernsmo says. In reality, human subjects only found less than 20 percent of the shiny beetles compared to finding up to 80 percent of the plain-colored ones.

Kjernsmo hypothesizes that “disruptive camouflage” is at play since the iridescent cases change colors depending on the angle you view them from. This sort of camouflage works by breaking up the typical shapes or outlines of an animal by projecting a contrasting pattern. But understanding the exact mechanism that turns these particular shimmery colors into nature’s invisibility cloak will take more research.

And it’s not just beetles who might take advantage of this unique version of camo—birds, snakes, and fish all have some of the same sparkling color schemes, Kjernsmo says. “Maybe we are starting to unravel the reasons for why these beautiful, brilliantly changeable and metallic colors are so taxonomically widespread.”