What an ancient jawbone reveals about polar bear evolution 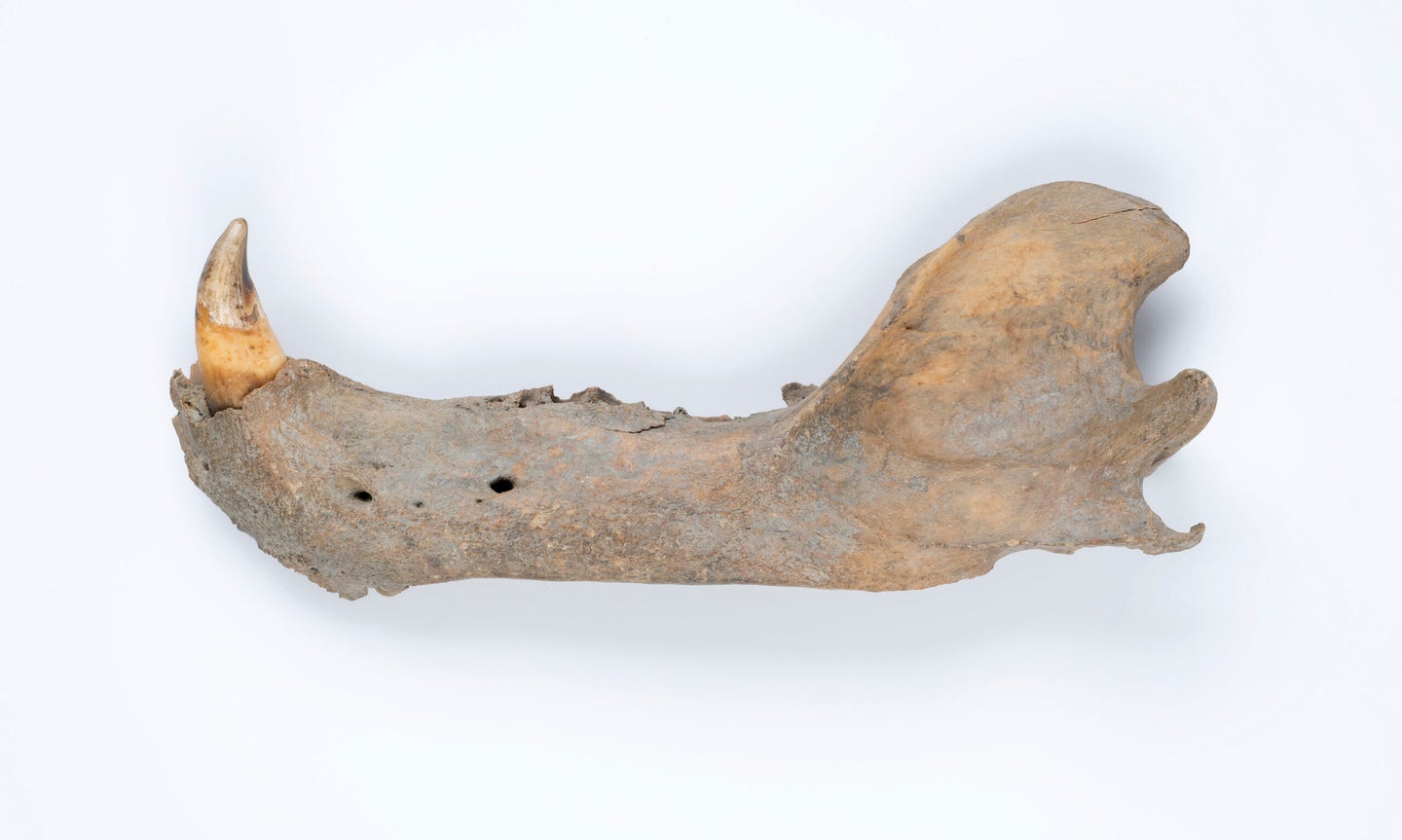 The jawbone of a polar bear that lived on the archipelago of Svalbard 115,000 to 130,000 years ago. Karsten Sund, Natural History Museum (NHM), University of Oslo
SHARE

The longer you think about polar bears, the stranger they seem. They’re the largest bears and the largest land predator. They’re adapted to a life spent crossing open ice floes, or waiting out hungry summer months. Despite those superlatives, it’s hard to figure out how exactly these bears came to be, because they rarely leave bones behind to be studied. “When they die, their remains end up on the seafloor,” says Charlotte Lindqvist, an evolutionary biologist at State University of New York at Buffalo.

So in 2004, when a geologist working in the cliffs of the archipelago of Svalbard, Norway, found a 115,000-year-old jawbone sticking out of the sediment, the find spurred decades of insight into the evolution of the polar bear. A new, high-resolution analysis of the DNA contained in that jawbone, published this week in Proceedings of the National Academy of Sciences, opens a window into the evolution of both brown bears and polar bears through a warming and cooling world.

The study also clarifies a yearslong debate among evolutionary biologists: Polar bears and brown bears are so closely related that it’s been proposed the animals should be lumped together as one species. According to the new analysis, which compared the DNA of the ancient jawbone to that of 65 modern bears, the species are clearly genetically distinct.

The population history of polar bears and brown bears is “so different,” says Lindqvist, who has led much of that research on the genes of ancient polar bears. “One is this Arctic specialist, and one is a boreal generalist, found across the Northern Hemisphere.”

But the two have evolved in tandem for roughly the past million years, and polar bears carry genes from repeated interbreeding with brown bears. That’s a new discovery—prior studies, which hadn’t had access to the ancient jawbone, had suspected that polar bears had contributed genes to brown bears. In fact, it’s the other way around.

Since the early 2000s, biologists have watched ‘pizzly bears’ expand across the high Arctic as brown bears move north into polar bear habitat. But the pizzlies, the offspring of a polar bear and a grizzly, aren’t as common as news coverage makes it seem. As far as genomicists can tell, the hybrids are all descended from a single female polar bear, who mated with two different brown bears.

That pattern seems to have been true for ancient bears, too. Hybridization might have been consistent, but it wasn’t common—a chance encounter between a few individuals, rather than an interspecies love fest. Brown and polar bears live radically different lives, even when they cohabit the same latitudes. Polar bears are primarily an ocean animal—hence their scientific name, Ursus maritimus—and breed mostly in March and April. Brown bears hunt in forests and plains, and breed during the summer.

Brown bears are wildly genetically diverse compared to their maritime cousins. There are the populations Americans know as grizzly bears, which inhabit the Rocky Mountains and once lived as far south as Mexico. There are European brown bears in Scandinavia and Russia. There are Kodiak bears, which live on the Alaskan Kodiak Archipelago, and grow nearly twice the size of typical brown bears, rivaling the size of a bison.

[Related: Secrets from zoo polar bears could help conservation efforts in the wild]

Once, polar bears were genetically diverse, too. The ancient polar bear whose jawbone was retrieved in Norway carries enough unique genes to be a “sister group” to its modern counterparts. Still, says Lindqvist, it lived in the same place as today’s polar bears. It grew to about the same size. “At least from that limited evidence, it was just a regular polar bear as we know it today,” she says.

When it was alive, the ancient bear probably wasn’t a genetic outlier—it was just one of many dwindling sister populations. It seems to be evidence of a diverse world of polar bears that started shrinking 300,000 years ago. It’s not clear what sparked the die-off, although it roughly coincides with the beginning of a glaciation. But “it’s a massive bottleneck that was very extended,” Lindqvist says. “It’s certain that they lost a lot of diversity.”

The ancient bear lived in a warm world, a period known as the last interglacial, when global temperatures were higher than they are now. As the bear paddled the Arctic Ocean, ancient hippos roamed Britain. Lindqvist says she worried this finding would be misconstrued: that people would say, well, then the bears should be fine with climate change. But these findings, she says, “certainly seem really dire.”

Polar bears may have weathered a million years of changing climates. But they have never experienced changes this fast, and they’re entering a new, hotter period without the benefit of the genetic diversity they once boasted.