Sun bears mimic faces just like us, and it’s raising some eyebrows

In a good way! 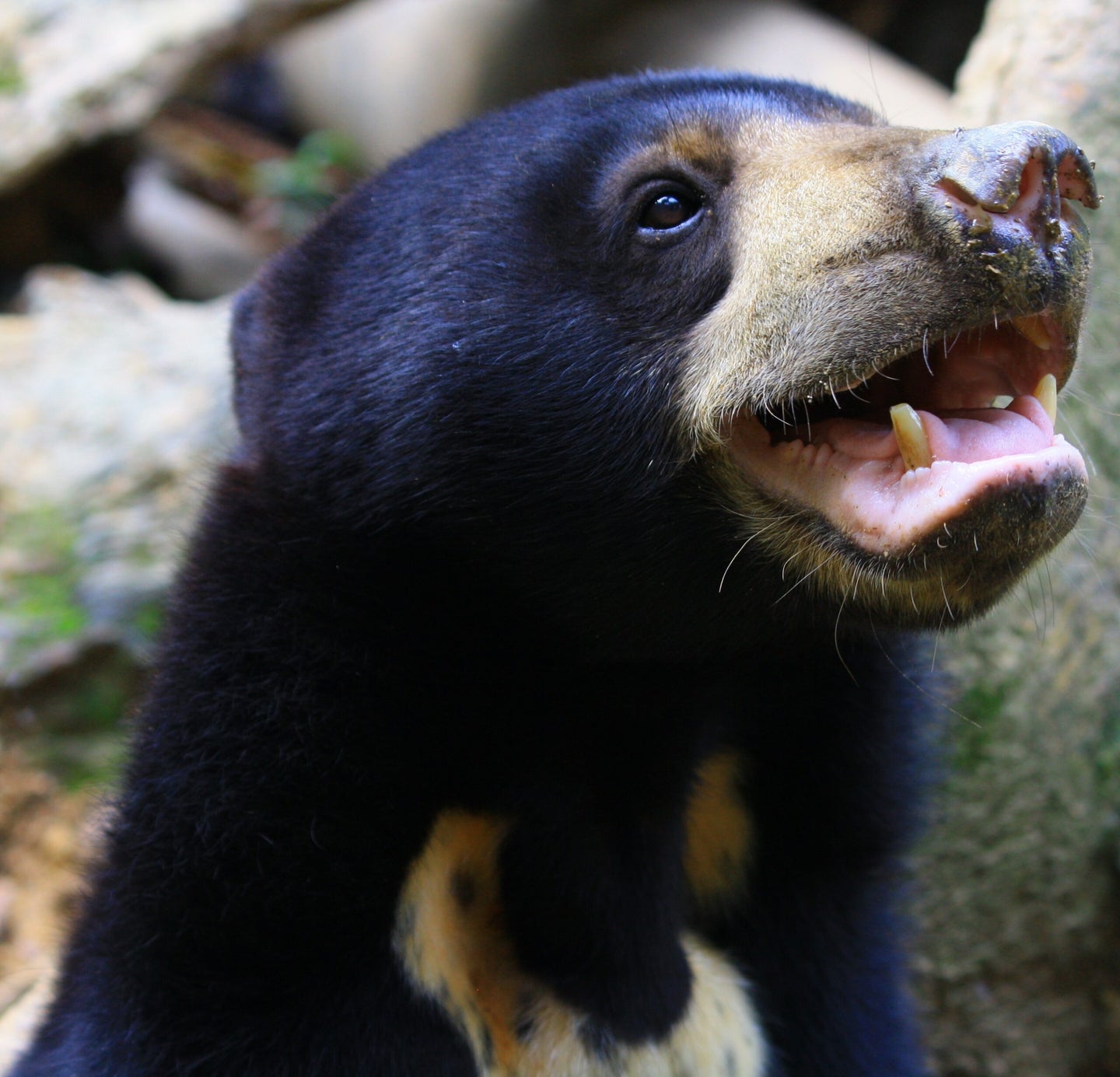 Earth’s smallest bears dwell in lowland forests that stretch from southern China down to India and Indonesia. Measuring a wee four feet long and weighing in at around 120 pounds, sun bears are notably shy, solitary creatures.

Scientists think the majority of social interaction the bears see is during mating season and while females raise their cubs, who stick together with mom for two years or more.

So it was particularly shocking when researchers saw pairs of sun bears in a Malaysian conservation center precisely mimic each other’s facial expressions in less than a second, a sign of social intelligence only before seen in humans and apes.

“This is so surprising because the sun bear is not a social animal,” says Marina Davila-Ross, a comparative psychologist at the University of Portsmouth and co-author on a new study detailing the observations published Thursday in Scientific Reports.

Previously, their claim to fame was the golden semicircle of fur on their chests. Many thought the marking—which is unique to each bear, like a fingerprint—looked like the rising sun, earning the ursine icon it’s common name. With sharp claws and a cartoonishly long tongue, sun bears dig into tree bark, termite mounds, and beehives in search of snacks. (To the dismay of farmers, they also enjoy the occasional coconut or banana.) They’re unbearably cute, but they’re not what you think of when you conjure an image of a socially intelligent animal.

Great apes and monkeys have an obvious connection to humans, so their social communication is somewhat expected, if still impressive. “Sun bears have this complex facial communication without a special evolutionary link to humans,” says Davila-Ross, “so this advanced form of mimicry is almost certainly present in other species, too.”

Indeed, this pillar of communication thought to be advanced and unique to hominids could be much more widespread than we thought. Just as we return a smile to a friend in conversation to show empathy, sun bears might mimic one another’s expressions to strengthen social bonds. We aren’t so special, after all!

To figure out exactly what was going on, Davila-Ross and her colleagues studied footage from the Bornean Sun Bear Conservation Centre. There, the animals are kept in a single enclosed area, but with enough space to live solitary lives if they wish. Sun bears occasionally engaged in a kind of play-wrestling—which was sometimes gentle, and other times rough—during which one bear would flash an “open-mouth” expression, jaws wide and tongue out. By mimicking the expression precisely and immediately, researchers think that the playmate bears are signaling they’re ready to start playing more roughly, a sign of tighter social bonds.

The researchers studied two years worth of footage of 22 sun bears between the ages of two and 12 years old. They catalogued bear faces in hundreds and hundreds of play interactions. In that period, 21 of the 22 bears showed the open-mouth expression, and 13 did so within a second of seeing their playmate’s expressions.

If the researchers’ theory holds up in the wild—which Davila-Ross would like to test, though it’s difficult since so few sun bears are left and they’re extremely solitary—it would shake down the way we think human communication methods are superior to other species’.

“We can speculate a lot about the social behaviour of sun bears, as it will probably be a loooong time before any methods are found how to ‘spy’ on them in a tropical rainforest,” Gabriella Fredriksson, a conservation biologist and co-chair of the of the IUCN sun bear expert team who wasn’t involved with the new study, told PopSci in an email. “But from their behaviour in enclosures it seems that they are quite capable of pretty good social interactions!”

We know for sure that humans, apes, and animals domesticated to live with us communicate using facial expressions. Davila-Ross published a study in 2017 that shows our canine companions are more dramatic when they know we’re looking at them. But if the solitary sun bear can convey feelings through facial expressions and can mimic one another quickly and with accuracy, it’s totally plausible to think various other animals are excellent communicators, too. Davila-Ross says she’s interested in looking at this in solitary predators like tigers or the clouded leopard.

And aside from dismantling our worldview of communication in the animal kingdom, knowing how sun bears bond socially and parlay with one another could be really useful when it comes to conservation. The IUCN lists sun bears as vulnerable due to a number of factors—farmers kill them when they wreak havoc on their crops, locals kill mother sun bears to sell the cubs as pets, and others are kept as prisoners while their bile is harvested for use in Chinese medicine or sold on the black market. While it’ll take a culture change and new laws to truly save the sun bear, understanding more about the elusive animals will help scientists rehabilitate them with the right skills they need to survive in the wild.

“We see so much potential here in these animals to learn more,” says Davila-Ross. “Knowing more can help us increase their chances of survival.”