But the doggles don’t come cheap. 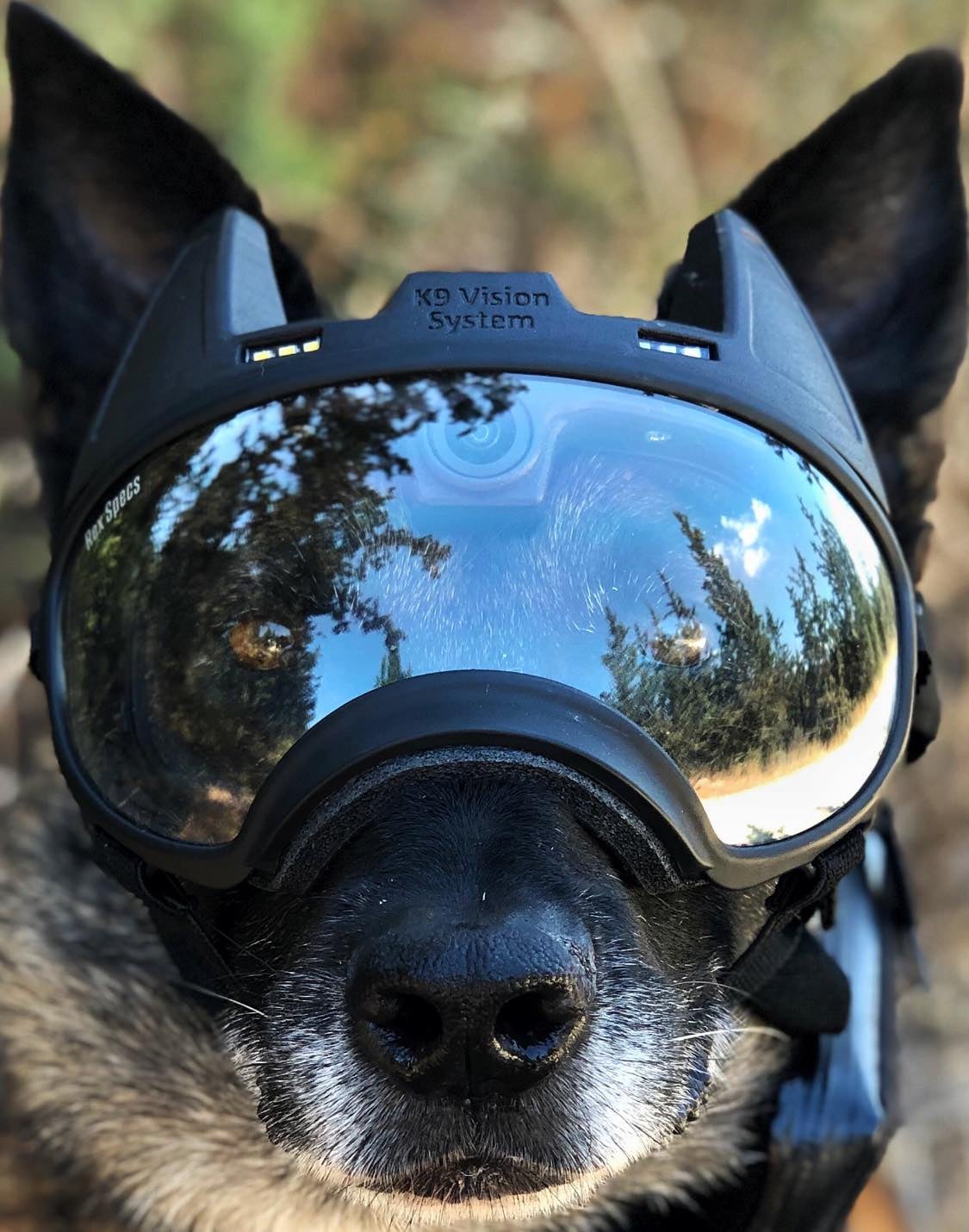 When Thomas was a special forces dog handler in the gendarmerie—a French militarized police force—he found it worrisome when he lost sight of his canine, Fusil. The pooch was trained to follow a laser beam that allows the handler to point to objects or places that are far away, and to work at night or other low-light conditions. But when the dog went out of view, he could not, of course, see what its status was.

“I had no way of knowing where he was, what he was seeing, or of giving him an order without raising my voice,” he says. “I just had to wait until he came back.”

So Thomas—who prefers that we not reveal his last name as he is still on active duty in the gendarmerie—started thinking about how to resolve these problems. He wanted to be able to see where the dog was, and to give it orders that only the animal would hear. And the system had to be comfortable and easy for it to wear.

So Thomas and colleagues in the special forces branch of the gendarmerie GIGN (groupement d’intervention de la gendarmerie nationale) started working on various ideas that might solve his problem.

Canine cameras already existed. “The problem with these is that they have to be set quite high over the dog’s back to see over its head, and that means they’re very difficult to keep upright and steady and they also get in the way if the dog has to crawl into narrow spaces,” he says.

Also, there’s another problem: when the animal sits, the camera points skywards. That’s great if you want to check the weather, but not so helpful if you want to know why the dog is sitting.

Thomas also knew that canine eye-protection goggles also existed, so he started working on the idea of integrating a camera into those devices. He approached a French company, Morin, a manufacturer and distributor of canine products. They were immediately interested, “even if we thought that only about a dozen special forces units might be interested,” the company’s founder told Popular Science at a homeland security exhibition in Paris in November.

Thomas took a 3-year leave of absence from the gendarmerie in order to work on his project. To do so, he founded a company, T&S Concepts, with a friend, Stéphane. The difficulty lay in developing a high-quality video and radio transmission system, with zero latency between what the dog sees and hears, and what’s transmitted to its handler; the dog and human need to have the same information at the same time. To solve this problem, they approached experts who were working on drone technology.

The result is the K9 Vision System: a pair of goggles with two tiny video cameras. Each camera has 145 degrees of vision: one is set between the dog’s eyes, and the other just above the goggles but facing backwards, so it can see behind the dog’s head. The cameras and the LED lights on the goggles (white to light up the dark as needed, and infrared, on all the time, to give the handler more information on their screen) are controlled by a hand-held receiver-controller unit. The K9 Vision System weighs just five ounces. Data transmission is encrypted. The system runs for four hours but an extra battery on the dog’s collar extends that to eight hours.

The dog wears a collar, and attached to it are a microphone, so that the handler can hear what his dog is hearing, and a radio with loud-speakers so the animal can hear his handler’s commands. Goggles and collar are water resistant for 30 minutes in a maximum of 3 feet of water.

Thomas, whose dog, Fusil, is a Belgian Malinois (he’s on Facebook), says it took half an hour for the canine to get used to his new eyewear: “And now he gets really excited when I put them on him because he knows he’s going to work!”

Other dogs may take up to a week to get accustomed to the goggles, Thomas says.

Somewhat to the developers’ surprise, other commando and special forces groups in France, the US, and other countries have shown enormous interest in the goggles—despite a price tag that ranges from about $33,000 to $35,000, depending on the options.

Editor’s note: This story has been updated to correct an error regarding the price of the goggles.