It’s the 10th anniversary of the ‘Miracle on the Hudson.’ Here’s what we’ve learned since.

“Why did the bird cross the runway?” and other real concerns at the Airport Wildlife Hazards Program. 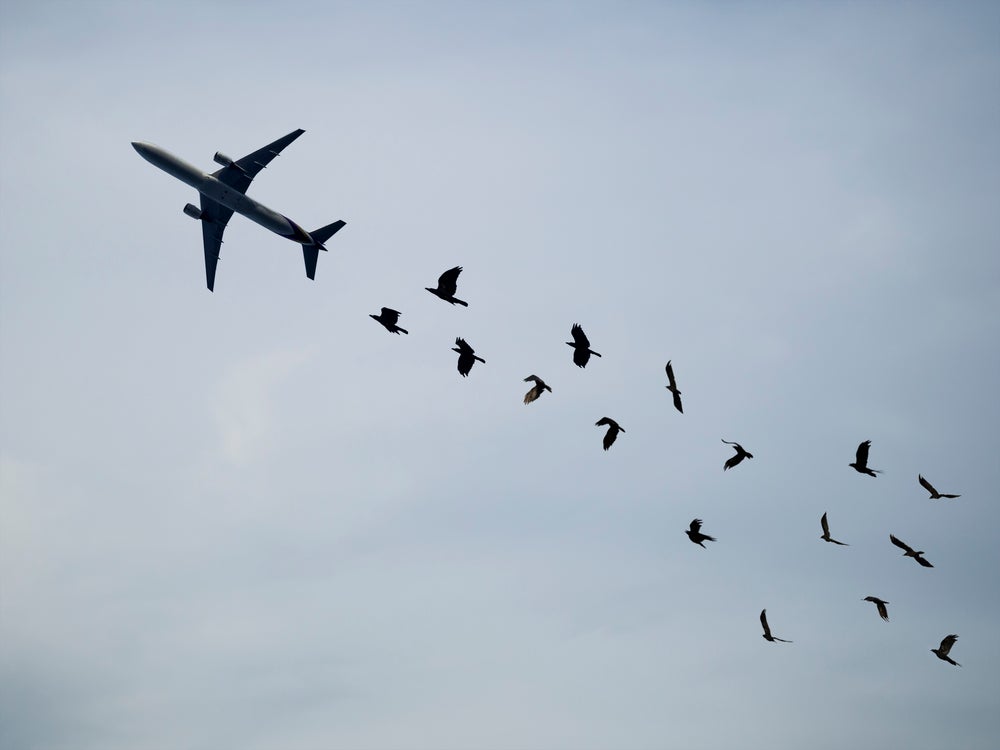 Mike Begier has been the national coordinator of the Airport Wildlife Hazards Program for just over 10 years. The program, which is nested within the U.S. Department of Agriculture, offers civil and military airports a very particular kind of expert: wildlife biologists.

Pilots reported 14,349 strikes between civil aircraft and birds in 2017, the last year for which comprehensive numbers are available. Minimizing the chance for these encounters, and dealing with the fallout, is a high priority for the U.S. government and, whether they know it or not, the millions of Americans who fly each year.

Only 4 or 5 percent of these strikes actually cause damage to the plane in any given year, Begier says, and even fewer make headlines. But just a few months into his tenure, he watched the most infamous strike in history unfold.

Today, it’s called “the Miracle on the Hudson,” but on January 15, 2009, when US Airways Flight 1549 struck a flock of Canadian geese and, in short order, lost all engine power and landed in the Hudson River just west of midtown Manhattan, it was a stomach-churning spectacle of national interest.

Captain Chesley “Sully” Sullenberger has since been duly valorized for saving the lives of all 155 passengers on board. (Most recently, Tom Hanks played him in the film Sully, which is about the highest honor a movie-going American can imagine.) But the crucial role of the scientists at the Airport Wildlife Hazards Program and their colleagues at the Smithsonian Institute’s Feather Identification Lab can’t be understated.

In a new documentary, Bird v. Plane: Miracle on the Hudson, which airs Tuesday night on the Smithsonian Channel, scientists are telling their side of the story, and showing how the Hudson incident demanded the best of their unique abilities:

“There’s a lot of proactive stuff, and a lot of reactive stuff,” Begier says of his work. To stop strikes from happening, biologists must first understand the unique environment a given landing strip is situated in, and ID the animals that could pose a threat to human safety. Depending on the needs of the airport, their consultations can range from a simple phone call to a full-time on-site staff scientist (or two).

At LaGuardia, the Queens, New York airport from which Flight 1549 took off, pilots find themselves in America’s densest urban environment juxtaposed next to the East River. Aircraft must cope with migratory birds, like the geese that got caught in Sullenberger’s blades, on a daily basis. And there’s always room for a real surprise: a dead whale washed up on the end of a runway in January 2017. The 15-foot-long carcass had to be cleared immediately, lest its rotting flesh attract more birds, this time of the scavenger variety.

Around the country, some of these incidents seem pretty random: In Alaska, a bearded seal lumbered its 450-pound body a quarter-mile inland for some mid-tarmac sunbathing. But others are an obvious result of the airport environment. For example, in Orlando, Florida, a flight was delayed when an alligator decided to relocate from one runway-adjacent pond to another. “We have this thing we have called the habitat triangle: food, water, and cover,” Begier says, which all animals require. “What happens is that airports [have those] elements… everywhere.”

Once a wildlife biologist has gotten a lay of the land, they can make proposals about how to intervene. Sometimes, it involves altering the natural environment. There was, for example, a population of tree-swallows living in bayberry trees at John F. Kennedy International Airport, which also serves New York City airlines. Though small—the iridescent blue bird weighs less than an ounce, compared to a Canada goose’s 14 pound average—they posed a flight risk, so the bayberry trees were cut down, pushing the birds out of the area. In these and other cases, scientists must place themselves in the minds of these animals and ask,“Why did the bird cross the runway?” according to Begier.

Such ingenuity is the hallmark of the Airport Wildlife Hazards Program, who mix science, detective-work, and MacGyver-like problem-solving skills. They may also recommend the use of pyrotechnics, acoustic devices, propane cannons, and green lasers (which are especially scary to birds) to cope with avian interference. A less-common but hilarious intervention involves remote control cars, which are driven toward the birds until they’re sufficiently scattered. “Everything’s on the table,” Begier says. In about 10 percent of cases, agents will use lethal force, killing an animal before it has the chance to inflict further damage.

But birds and aircraft still collide. In these instances, wildlife biologists collect “snarge”—any and all residue left on a plane after a strike. As documented in the Bird v. Plane documentary, this material is sent to the Smithsonian Institute’s Feather Identification Lab for analysis. There, scientists can use bird specimens to compare feathers and genetic tests to peer deep inside an animal’s genetic code, thereby determining what kind of bird was involved in a given strike. This information is returned to the biologists, who can further refine their species-specific advice to the airport.

Each year the importance of Begier’s work only grows. Air travel is increasing dramatically, and with it the potential for bird strikes. In the last decade, the Airport Wildlife Hazards Program staff has expanded along with demand, a trend Begier thinks will continue. Their toolkit has also expanded. More birds of prey are being trapped alive and released somewhere else. GPS technology, which permits biologists to put trackers on individual birds, is helping researchers better understand where, when, and at what altitude certain species move. And, Begier says, work is underway to make the plane itself a tool in the wildlife biologist’s toolkit by using pulsating colored lights on the body of the aircraft to gently push birds away.

The hope is that, with enough skillful intervention, pilots won’t have to work a bird-related miracle again.