For prairie flowers, fire is the ultimate matchmaker 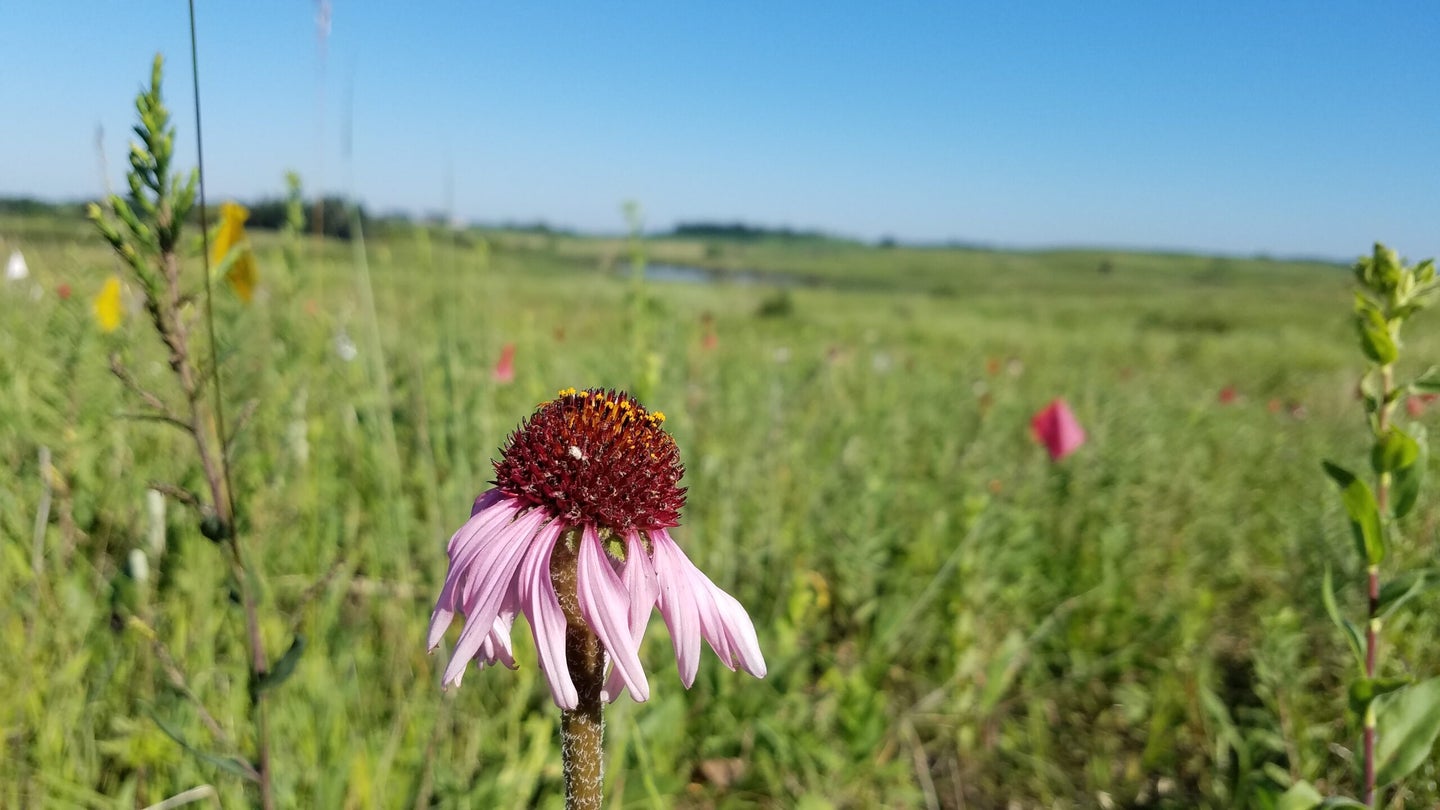 A coneflower plant, which produces just one (or even no) flowers during most years. Stuart Wagenius/Chicago Botanic Garden
SHARE

Sometimes the best way to kindle a romance is with actual fire. After tracking flowers on a prairie in Minnesota for 21 years, scientists reported this week that the plants reproduce more successfully in the year following a carefully controlled burn. Come summer, many of the plants would bloom at the same time, giving them a better shot at being pollinated.

Understanding the relationship between prairie plants and fire is important for preserving this rapidly dwindling ecosystem, says Stuart Wagenius, a conservation scientist at the Chicago Botanic Garden in Glencoe and Northwestern University in Evanston, Illinois, who published the findings in Proceedings of the National Academy of Sciences.

Prairies once covered vast swaths of central North America, but European settlers converted most prairies into agricultural land. Today, more than 95 percent of tallgrass prairie land has been destroyed, and fires are often suppressed in what prairie remnants remain. Over time, this leads to fewer plants, fewer insects that rely on the plants for food and shelter, and fewer birds and other animals that feed on the insects in turn. Prairies are among the most threatened and least protected habitats in the world, Wagenius says.

“We’ve identified a new way that fires help plants persist in [prairie] remnants,” he says.“We looked at flowering and pollination—the sexy aspects of fires—and how they can help plants survive.”

Raging wildfires such as the ones that have recently swept through California and Australia are catastrophic for people, plants, and animals. However, regular small fires are an important ingredient for helping many ecosystems flourish. Controlled fires clear out dried vegetation that can feed wildfires. Some plants also need fire to reproduce; certain evergreen trees rely on the scorching heat from fires to melt the waxy seals on their pinecones. In prairies, fires clear out woody plants and shrubs that outcompete smaller plants for light and nutrients.

Fire provides an additional advantage for the narrow-leaved purple coneflower, as Wagenius and his colleagues saw. For these little plants, which are common in prairies west of the Mississippi River, finding a mate is a tricky undertaking. Purple coneflowers can live for decades and send up a fresh sprout each year from a taproot deep in the soil. But only some of these plants will produce flowers in any given year, so when one of them does burst into flower, its romantic prospects might be few and far between.

To really thrive, they need a little help: enter the fire.

Between 1996 and 2016, Wagenius and his team tracked nearly 800 purple coneflowers on the Staffanson Prairie preserve. In nine of those years, experts conducted prescribed burns. “In the summer after a burn, many more plants flower,” Wagenius says. “It is just a huge flowering festival.”

Purple coneflowers and many other prairie plants were previously known to bloom vigorously after fires. However, the researchers saw, fire also prompted purple coneflowers to sync up; more plants bloomed at the same time in the summer after a burn. This meant that instead of being isolated, the purple coneflowers were surrounded by potential mates—and went on to produce nearly double the number of seeds compared with other years. Wagenius says it’s not yet clear exactly how fires signal the flowers to get busy.

The new findings may help the people who manage prairies to better understand the different ways that fire affects the plants growing in these habitats, says Kathryn Yurkonis, a grassland ecologist at the University of North Dakota in Grand Forks who was not involved in the research. “We know that fire is important for maintaining grassland biodiversity and this sheds light on a piece of that puzzle,” she said in an email to Popular Science.

However, Yurkonis added, it remains to be shown how the fires influence the purple coneflower population. “This paper implies that making more seeds would mean more seeds would land on the soil, germinate, and enter the population of plants – but they don’t actually examine that step,” she said. “I’d be curious to see whether this actually translates to more [purple coneflower] seedlings.”

To answer this question, Wagenius and his colleagues are tracking survival, germination, and growth in the purple coneflowers over time. As a next step, they also plan to investigate whether other prairie plants enjoy similar benefits from fires.

He and his team hope that their findings highlight the importance of prescribed fires for helping these diminished but still vibrant landscapes thrive in the future.