For polar bears contending with climate change, it’s ‘survival of the fattest’

How melting arctic ice has made life harder for lean polar bears. 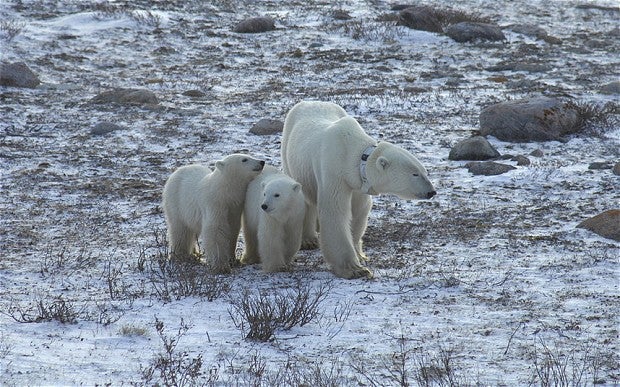 Led by researchers at the University of Alberta, a new study in the Journal of Animal Ecology from the British Ecological Society finds that lately, due to climate change, it’s only the fattest polar bears that survive the year.

Polar bears have an unusual hunting period. Most animals stock up on food in the warm months, building fat reserves to get through the long, cold winters. But polar bears in Canada’s Hudson Bay area do the opposite: their best food source is the arctic seal, which they can only hunt in the coldest winter months. In the winter and spring, the polar bears head on out into the bay, frozen over with ice, and begin hunting delicious, fatty seals. In the summertime, the ice melts, and the bears retreat off the ice onto land, where they are less efficient hunters and, besides, there’s less food on the land of the tundra than under the water.

Rises in climate temperature have had a major impact on the polar bear’s hunting. The ice melts faster and the season shortens, so the bears have less and less time to hunt during their time of plenty. Since 1991, the team has been monitoring an array of over a hundred female polar bears–the males have necks wider than their heads, which makes it hard to give them a collar that’ll stay on–and found that their hunting time is indeed getting shorter and shorter. So it’s only the fattest bears that can survive with this shorter hunting season, to the detriment of the species as a whole.