This frog’s signature chirp can be heavenly or hellish

As the coquí invades new states and islands, it brings its rowdy evening soundtrack with it. 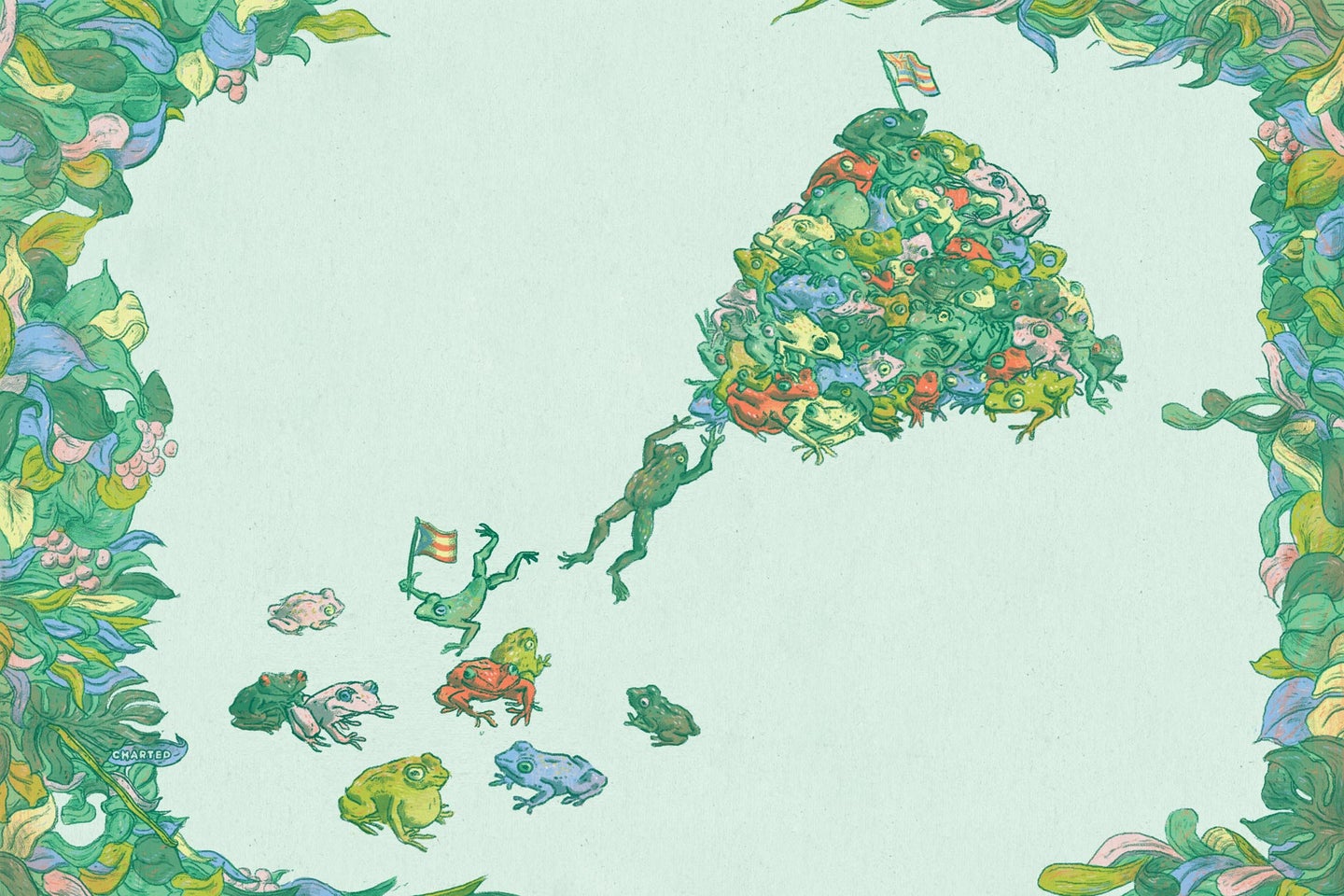 The call is a nightmare, registering up to 90 decibels from 3 feet away. Meredith Miotke
SHARE

In its native Puerto Rico, the coquí frog’s eponymous croak is the stuff of lullabies. According to myths of the island’s indigenous Taíno people, the tiny amphibians memorialize a goddess’s lost lover by singing his name over and over: ko-kee, ko-kee.

But in places without nostalgia for the nocturnal critter—or predators to keep it in check—the call is a nightmare, registering up to 90 decibels from 3 feet away. That’s like a mower running outside your window all night. Coquí have infiltrated the Dominican Republic, Virgin Islands, Florida, and California, but are most worrisome in Hawaii, where their cacophonous spread shows no signs of slowing.

When the species arrived on Hawaii’s Big Island in the ’80s—likely a stowaway on imported plants—locals raged over lost sleep. But the chorus kept growing. In Puerto Rico’s rainforests, the coquí typically live in densities of 8,000 per acre. Hawaiian officials have documented more than quadruple that. Utah State University ecologist Karen Beard says a night of fieldwork can leave her ears ringing.

This boom also means a bigger impact on the ecosystem. In the coquí’s native habitat, birds, spiders, and lizards feast on them and their eggs. But Hawaii’s isolated archipelago has few endemic species—let alone any interested in eating loud-mouthed frogs—so the coquí are more likely to take food from native island creatures than feed them.

So far, they’ve remained mostly in wet, warm lowlands that already host other invasives like rats and mongooses. But climate change could coax coquí up into warming mountains, potentially putting them in direct competition for food with local birds like Hawaiian honeycreepers. These finches represent some of the islands’ few original inhabitants, and less than half the group’s species have survived successive waves of alien intruders.

The state has tried for decades to contain the spread. In 2004, when the mayor of the Big Island called a state of emergency, officials from multiple agencies fanned out across infested regions and tried to capture the frogs by hand. Helicopter squads spray citric acid, which kills frogs by burning their skin. Such techniques have been somewhat effective on Oahu and Kauai—which are relatively coquí-free—but pest controllers there still have to hunt down or spray the occasional choir.

Despite the environmental threat, most residents have at least grown accustomed to the piercing songs, Beard says. It could be the result of selective attention, where the brain learns to screen out certain noises without ignoring the entire soundscape (this keeps sounds like our own breathing from driving us to distraction). Some even like the chirp: An entire generation of Hawaiians has grown up hearing the coquí’s call in their dreams.

These peaceful nights have a price. Once people acclimate to the noise, Beard says, they stop calling authorities with complaints. The Big Island is now a coquí paradise, but Hawaiians elsewhere may yet prevent the same level of infestation by picking up the phone when they hear those nocturnal cries.