Pandas have cute markings because their food supply sucks

Yet another reason that pandas are ridiculous(ly cute) 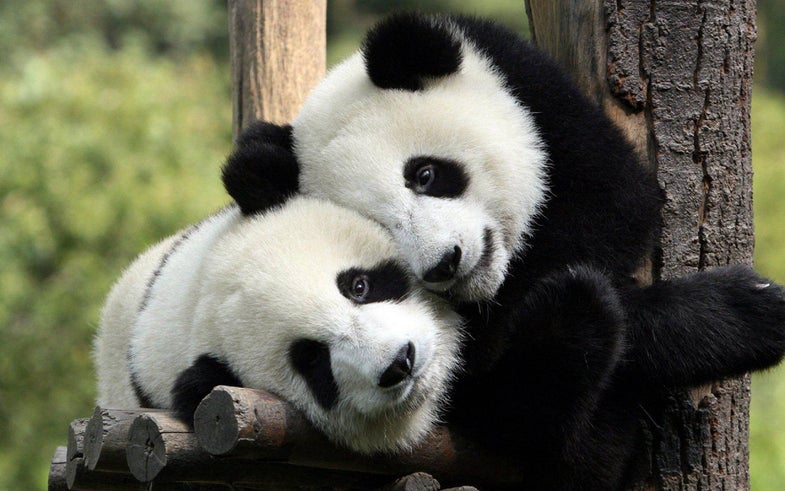 Pandas are cute—there’s no two ways about it. They have to eat 30 pounds of bamboo a day and then have to poop about 40 times a day, but look at those eye patches! And their fuzzy white butts! There are plenty of adorable bears, so what is it about the panda that’s so distinctive?

You might not have realized this, but not many animals have markings like the panda. There are species of penguins, birds, zebras, monkeys, lemurs, cows, butterflies, and snakes that have black and white markings. All have different reasons for their sharply contrasting colors. Birds use color to attract mates, so evolution has selected for brighter markings with distinct patterns. Zebras have stripes to defend against biting flies. Penguins just wanted to look like they were wearing little tuxedos, obviously. But most mammals, and especially most carnivores, tend to have more uniform coloring. Polar bears are white, brown bears are brown, and black bears can be either black or brown just to confuse you. So what’s with pandas?

Biologists from California think they may have figured it out. As they wrote in the journal Behavioral Ecology recently, different parts of the panda may have distinct reasons for being black or white. Overall, though, it’s favorable for pandas to have both colors because they don’t hibernate. And if you don’t hibernate, you have to have markings that work in both the winter and the summer. Polar bears don’t hibernate, but they’re only ever living in the snow (although soon that won’t be true), so they’re all white. Black and brown bears hibernate during the winter, so they can have darker coats without worrying about standing out against the white wintery backdrop. Pandas don’t hibernate, though. Bamboo isn’t nutritious enough for them to store up the kind of fat reserves that they’d need to survive the long sleep, so they roam around all year looking for food. That means they need versatile wardrobes. In the winter, their white bodies help them blend into the snow. In the summer, their black areas help them hide in the shade of the forest.

The eye spots have a more specific use: communication. Panda patches are fairly specific to the individual, and previous studies have shown that pandas can identify each other using their black eye markings. It’s also possible that the black spots help to enlarge the eyes, making the stares they use as an aggressive signal more intimidating. They try to hide their faces when they’re trying to be less dominant, and goodness knows a giant bear covering its eyes with its paws isn’t scary. It’s almost painfully sweet.

Of course, it’s possible that this analysis is wrong—that pandas have black eyes for some totally unrelated reason (maybe they just don’t know how to put eyeliner on properly?). And it’s important to remember that the way we see pandas may be very different from how pandas see each other, not just symbolically but literally. Most bears don’t have full color vision, nor do many other predators, so to really know whether things like camouflage or intimidating markings are effective we’d have to know how those animals see the world. As the authors point this out, the fact that pandas are black and white helps their case, since the contrast is similar between animals that see in full color and those that see mostly in grayscale.

Whatever the reasons for their coloration, the important thing to remember is this: pandas are ridiculous creatures that eat a food that provides little nutrition. And sometimes they accidentally sit on their own babies. But gosh darn it, they’re cute…so we’ll save them anyway.