4 unexpected facts about the Northern cardinal, a bird you should know better

It sounds like a lightsaber and comes in rare colors. Top that. 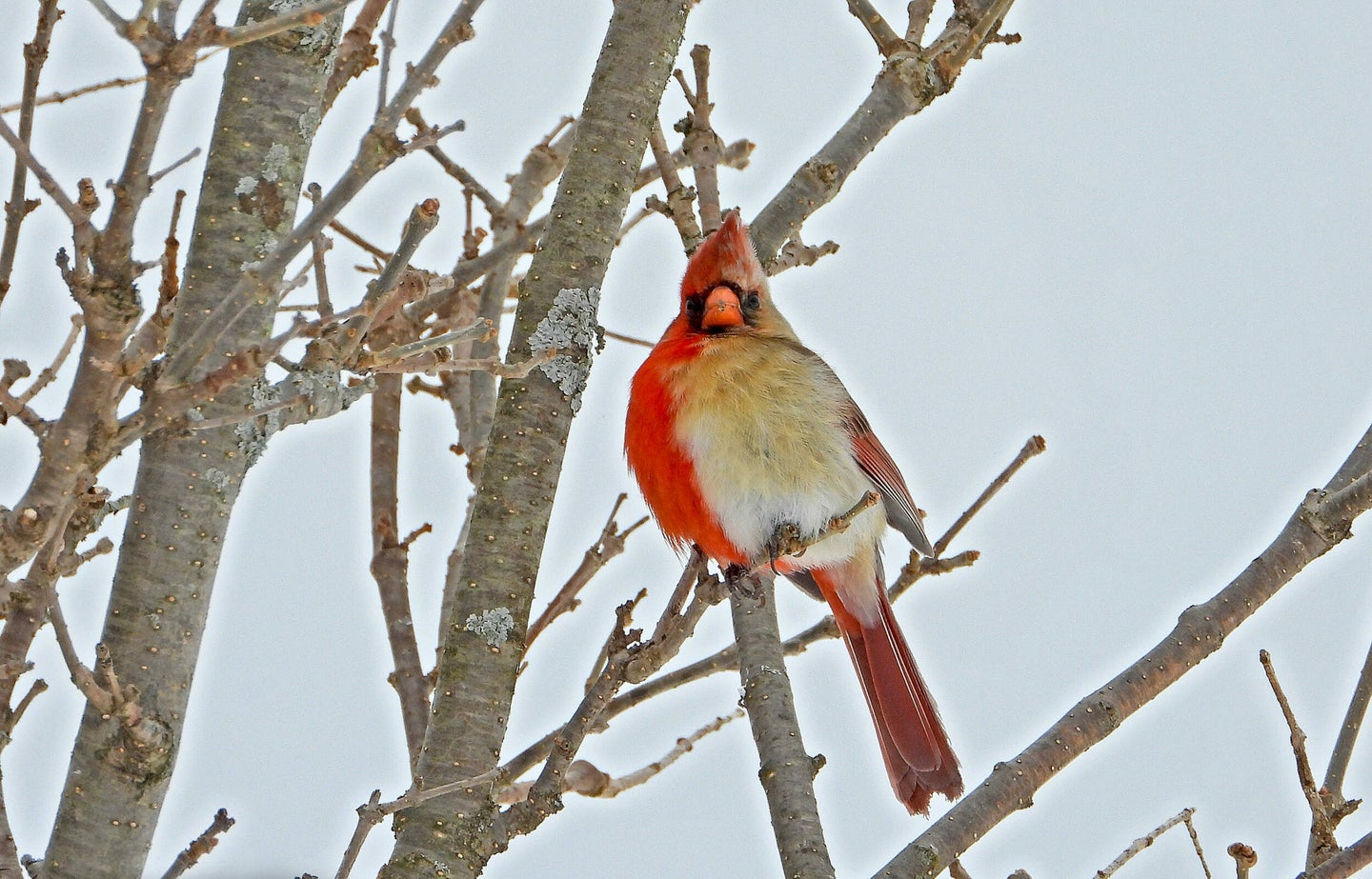 This post has been updated. It was originally published on March 26, 2021.

If you live east of the American Rockies, you’re probably used to seeing Northern cardinals zooming around in all four seasons. That’s right, baby—this species sticks around for the toughest weather, unlike other songbirds that only show up in spring and summer. But the cardinal’s consistency can also make it harder to appreciate. While its lipstick-smear look (scarlet in males and coral in females) is absolutely photogenic, it’s often overlooked by feeder owners and experienced birders because of its constant presence.

From an aesthetic and scientific perspective, cardinal birds are hardly boring. In fact, they’re downright delightful, and I’m here to tell you why.

Earlier this year, ornithologist James Hill found what he called a “one-in-a-million cardinal” in his backyard in Pennsylvania. The bird looked evenly split between female and male feathers, indicating that it was a bilateral gynandromorph. In short, the animal had a rare genetic condition that gave it female sex chromosomes (ZW in birds) on one side of its body, and male sex chromosomes (ZZ in birds) on the other. Biologists have observed a similar effect in songbirds like evening grosbeaks, as well as crustaceans and butterflies. And though this unique effect has popped up in Northern cardinals a handful of times, there’s no telling if the species is more predisposed to gynandromorphism. Field notes simply show that the mixed-sex birds are non-vocal, so they don’t have much success mating. Otherwise, they seem to go through life unbothered.

They can be other bold colors, too

While the Northern cardinal’s signature is red, there’s sometimes an individual that breaks from the mold. Just a few weeks ago Illinoisian Chelsea Curry reported a cardinal the color of an egg yolk at her feeder. It was oddly reminiscent of another yellow cardinal, seen in Alabama in 2018. In both cases, ornithologists speculated that there could be faulty wiring in the genes that control the birds’ pigmentation. Other experts have suggested that external factors, such as a poor diet or harsh climate, could ultimately affect the quality and color of their plumage. Either way, the anomaly is thought to be rare, so don’t expect the local cardinals to start looking like their highlighter-hued South American relatives anytime soon.

They sound like aliens, but in a good way

If you’ve ever heard a repeated, piercing whistle coming from a tree on your block, it’s probably a Northern cardinal. The males have a number of laser-like songs that would fit into the soundtrack of Die Hard or Stars Wars. But what’s even more fascinating is that the females sing, too. Historically ornithologists believed that the majority of female birds lacked musical chops, but the Northern cardinal is a melodious exception. The female cardinal’s tune has inspired modern scientists to listen carefully to the vocalizations of other common species around the world.

[Related: Bird feeders that will your backyard with song]

Someday there might be more than one Northern cardinal species

The cherry crested birds in Arizona don’t quite match their ruby-feathered cousins in, say, outside the White House. Researchers from the American Museum of Natural History have identified 19 types of Northern cardinal across the continent, including six near the US-Mexico border in the Sonoran and Chihuahuan deserts. Individuals in the Southwestern populations don’t look the same, sound the same, or live in the same habitat, which means they hardly ever cross boundaries to mate and swap genes. This leads to greater rift in the species, and over time, it could require new branding for Northern cardinals. Some experts even argue that the split is past due.