They’re mysterious to biologists and misunderstood by the public. 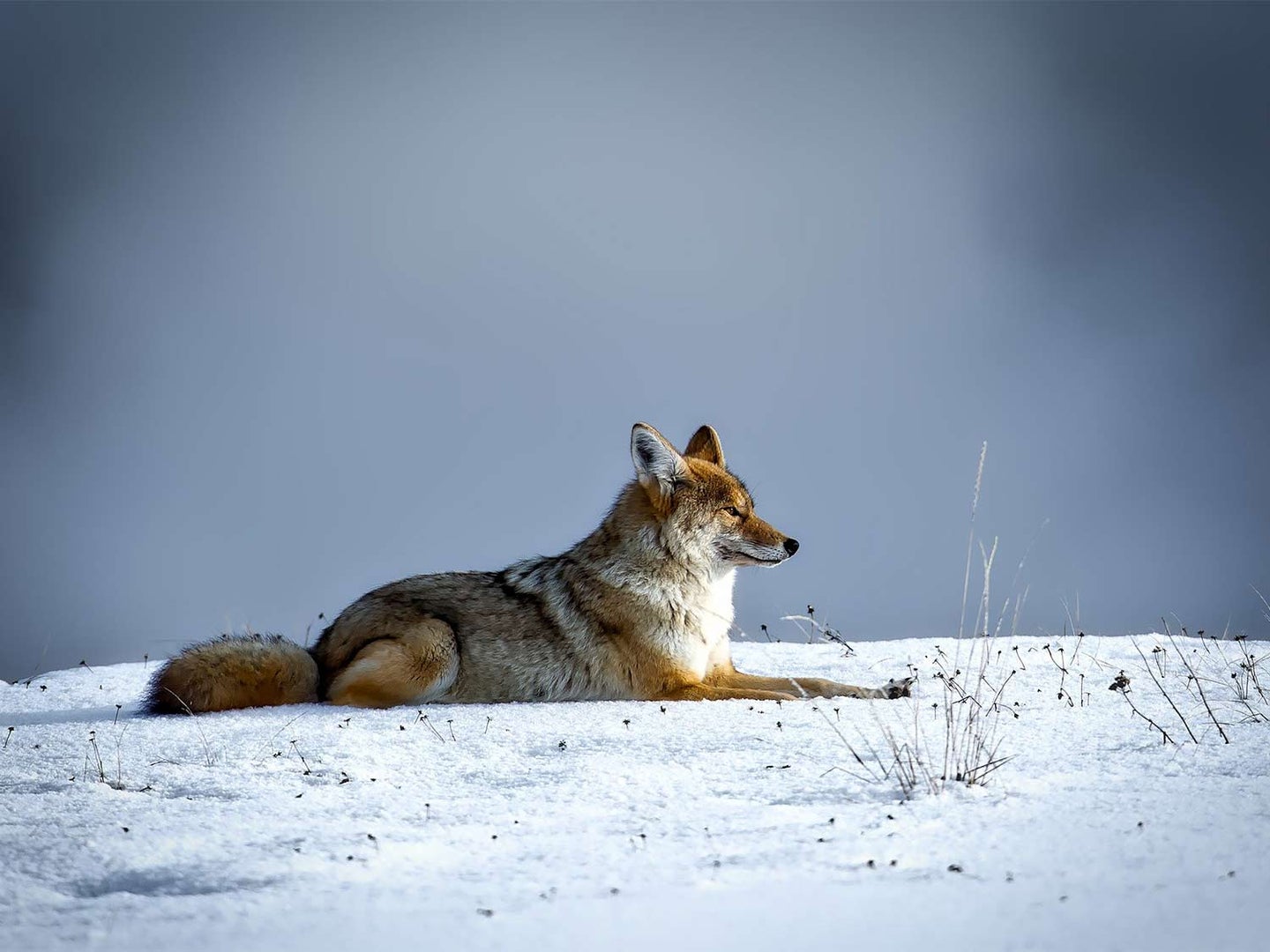 Most people, including biologists, now generally refer to them as Eastern coyotes (Canis latrans), but sometimes even the scientists aren’t exactly sure where this critter falls in the taxonomic spectrum. Meanwhile the human population is split. Some hunters consider them a nuisance and even a bane, others a challenge. Some suburban and even urban dwellers fear them, while others are thrilled to have them around. So what really is this large canid that now occupies nearly all of the eastern US and Canada? Let’s take a look.

Eastern coyotes were, and still are, sometimes colloquially referred to as coydogs, particularly on the leading edge of their eastward expanding range. Some of this is due to our need to ascribe names to new and different creatures.

“Our Eastern coyotes are very different from Western coyotes,” says Shevenell Webb, furbearer biologist with the Maine Department of Inland Fisheries and Wildlife. “On average, they’re about 10 pounds heavier. They eat deer and they show more color variation. Some exhibit a pale gray pelage similar to western coyotes, but others are blond, red, and even black. It was once thought this variation may be derived from historical breeding with dogs.”

Trent University professor and geneticist Linda Rutledge acknowledges that in Ontario researchers documented some dog introgression in the genome—but just in the Y chromosome, and not much.

“While there is some possible dog ancestry in the Eastern coyotes,” she says, “it is very limited and regional in places where it might occur.”

2. Is coywolf an appropriate term?

Webb is clear on this point.

“The term ‘coywolf’ is very misleading to the public. Eastern coyotes are coyotes. We recognize that some hybridization occurred, but they are not wolves.”

Most samples from genetic studies in Maine were deemed to be of Eastern coyote ancestry, but a small percentage had wolf ancestry.

“At some point, both species interbred and that signature is carried in genetics,” says Webb. She also noted one coyote had a wolf ancestry of 89 percent. Interestingly, it was one of the smaller animals in the study, a 27-pound female. “It didn’t look anything like a wolf,” she adds.

Rutledge is more circumspect, acknowledging the term is not entirely inaccurate. “The Eastern coyote is a hybrid animal that has both coyote and wolf ancestry,” she says.

Webb’s sentiment, echoed by other wildlife biologists and managers likely stems, at least in part, from the power of perception. The idea of a wolf in the neighborhood might be unpalatable to some folks. There’s also resistance to a more sinister motivation. Some claim that labeling this newcomer as a distinct species with “wolf” as part of its name could afford it more protection under the Endangered Species Act.

3. Why have Eastern coyotes been so successful?

In a word, adaptability. Some of this comes from their ancestry.

“The more genetic variation present, the more adaptable a species will be to changes in its environment,” says Rutledge. The Eastern coyote’s suite of genes proved quite beneficial as they moved eastward into a new and very diverse environment.

“This species that has adapted very well to Maine conditions, and is more successful than perhaps wolves could be,” Webb noted. “They live near people [and] have a more diverse diet.”

When large prey is scarce, they’ll eat smaller prey like rabbits, hares, and small mammals. When meat is scarce they subsist on a vegan diet. Household pets are on the menu in and around the trappings of man.

Eastern coyotes also have different physical and behavioral characteristics that allow them to better survive. One of those characteristics is what biologists call behavioral plasticity. Some Eastern coyotes form strong pair bonds and establish packs consisting of an alpha male and female, and extended family members, much like wolves do. Others mate, raise a litter, then drive their grown offspring away each year before raising another litter the following spring. Still others—usually males—are serially nomadic, settling down perhaps just long enough to raise a litter before moving on to a new mate and territory. And some may choose one strategy for a while, then change to another.

“The role left vacant when wolves were extirpated is an important one,” she says. Deer evolved over millennia in the presence of large predators. By removing those predators we may have done them and ourselves a disservice. Clear evidence exists in the proliferation of Lyme disease, car-deer collisions, CWD, and a changing public perspective of deer from once proud woodland creature to back yard nuisance.

“On the balance, it’s better for the ecosystem and biodiversity to have [Eastern coyotes] around,” continues Rutledge. Some might disagree, but it’s a fair point: Isn’t it a little selfish, not to mention a disruption of the natural order, to want fewer predators around and more deer, just so we can kill more deer?

4. Just how bad are these predators?

To a great extent, that’s a matter of perspective. Physical characteristics like larger bodies, skulls, and jaw muscles make Eastern coyotes better adapted to taking down larger prey, and deer are a favorite. A South Carolina study found that coyote predation accounted for between 46 and 84 percent of all deer mortality in the study area, and somewhere between 47 and 62 percent of all fawns succumbed to coyote predation, most within the first three weeks of life. Researchers also determined that most fawns were killed by different coyotes, meaning this behavior was pervasive rather than a few individuals that had learned to specialize in killing fawns.

While the researchers didn’t go so far as to say coyotes represent a threat for deer across the Southeast, they did note that the statewide deer population in South Carolina has declined approximately 30 percent since the mid 1990s—a period coinciding very nicely with an increase in coyote numbers. Other studies in Georgia and Alabama have shown coyote predation to be a leading cause of fawn mortality, and lower fall fawn-to-doe ratios since the arrival of coyotes.

Research is lacking in the Northeast, but it’s reasonable to assume the impact is worse in areas where deep snows concentrate deer and limit their mobility, and coyotes prey on adult deer more frequently. We also know coyotes practice surplus or opportunity killing, taking down and killing prey not for food but merely because it’s easily available.

All this makes them very unpopular with deer hunters. Behavioral plasticity in their breeding behavior also makes them difficult to eradicate. Removing an alpha male may disrupt pack dynamics for a short while but a nomad will soon be along to take its place. Or a subordinate may take over the role. Furthermore, absence of an alpha male in a formerly well-defended territory could result in several males establishing several families. When coyote numbers are reduced, prey becomes relatively more abundant. This, and less intra-specific aggression results in higher productivity and thus, more coyotes.

5. Is the Eastern coyote really a newcomer?

The recent history is fairly clear. Western coyotes began expanding their range eastward around the turn of the previous century, and somewhere along the way they met up with dwindling wolf populations.

“When a population is at a low, individuals will breed with other species if they can’t find a mate of their own [species],” says Rutledge.

The exact nature of these interactions is still unclear but the coyotes carried a diverse array of DNA as they continued east, into New York in the 1920s and Maine during the late 1960s and early 1970s. By the late 1970s, they had spread into southern New England, and subsequently continued expanding north and east into Atlantic Canada, and south throughout much of the Northeast.

Meanwhile, coyotes advanced on a southern front, crossing the Mississippi River around the mid 1960s and rapidly expanding eastward from Arkansas and Louisiana. Genetic evidence suggests they eventually linked up with their northern cousins during the mid 1980s in the central Appalachian mountains of Virginia and West Virginia.

Around this same time, the US Fish and Wildlife Service began reintroducing endangered red wolves along the North Carolina coast, and subsequently in Mississippi, Florida, and interior North Carolina. Some geneticists contend that red wolves are a distinct species while others claim they may be a divergent subspecies of Eastern timber wolves. Physically, they look very much like Eastern coyotes. There’s also evidence that a coyote, or coyote-like canid, once existed in the east, but disappeared from the fossil record about 11,000 years ago—about the same time red wolves began to appear, and humans started to inhabit North America.

What we’re left with is more questions than answers. Are Eastern coyotes new, or are they returning to fill a vacated and important ecological niche as top predators? Are they a distinct species, a coyote-wolf hybrid, or a divergent Western coyote with more than a trace of wolf ancestry? Perhaps a better question is: Do they belong here? They can be a nuisance to neighborhoods, a bane to deer hunters, and a challenge to both predator hunters and wildlife managers. Depending on your perspective, you can either appreciate or accept them, but they’re certainly not going away.