Strange giant diamonds give hints to the inner Earth’s composition 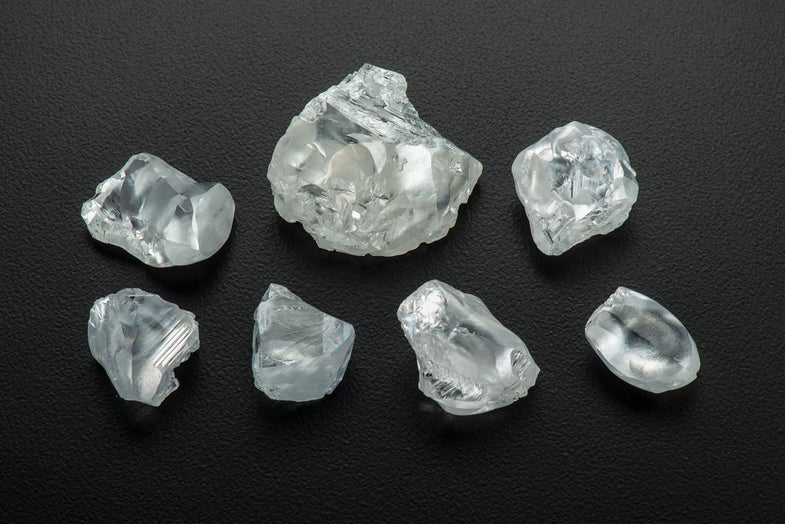 The largest diamonds ever mined on earth aren’t just set apart by their large size and luster, but by a unique origin story as well. They were born of metal, growing from patches of liquid iron and gas deep inside the Earth.

That’s the conclusion formed in a study published in Science on Thursday, written by Evan Smith of the Gemological Institute of America.

“Most diamonds form somewhere between 150 and 200 km [93 and 124 miles] deep in the Earth. They form in the thickest parts of continents, the base of the rigid continental tectonic plates,” Smith says. “98 percent of diamonds we mine come from this place.”

But a few, including the famous Cullinan diamond —the largest gem-quality diamond ever found, weighing in at over 3,000 carats—are too big and too different to have formed in the same place as other brilliant stones.

“Diamonds like [the Cullinan] have characteristics that aren’t quite the same as other kinds of diamonds. For years, geologists have wondered if maybe they formed in a slightly different way or if they came from a different part of the mantle. It’s been a lingering question that’s been really hard to tackle,” Smith says.

Studying these incredibly valuable gems proved nearly impossible. Asking to sample the crown jewels for a science experiment? Yeah, that’s not going to go over well. 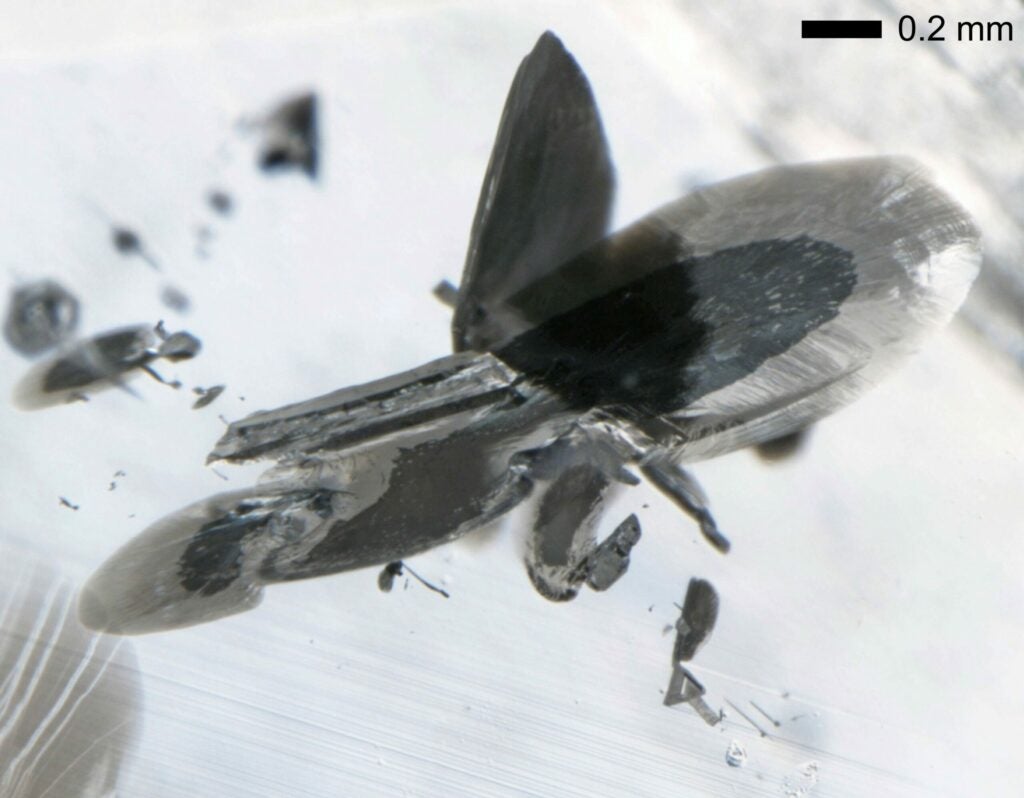 An inclusion in a diamond.

So Smith tried to systematically find diamonds that were of the same type and quality before they had been cut and turned into priceless heirlooms. He looked for gems that had inclusions, or bits of material trapped inside the diamond as it grows. “These give us clues about how the diamonds form, where it comes from, what else happens in that environment,” Smith says.

“It so happens that these big diamonds—like the Cullinen—are kind of surprising. They don’t come from the rigid tectonic plate, they come from somewhere deeper, in the convecting mantle,” Smith says.

Not only was Smith able to figure out where these large gems came from, he was also able to figure out how they formed—in a high temperature and high pressure environment that was speckled with bits of iron and nickel. “This is something that had been predicted based on theory and experiments. People have thought about it for at least 20 years now, but we’ve never been able to have confirmation,” Smith says.

“These diamonds are special because they tell us that the deep environment really can have metal in it,” Smith says. 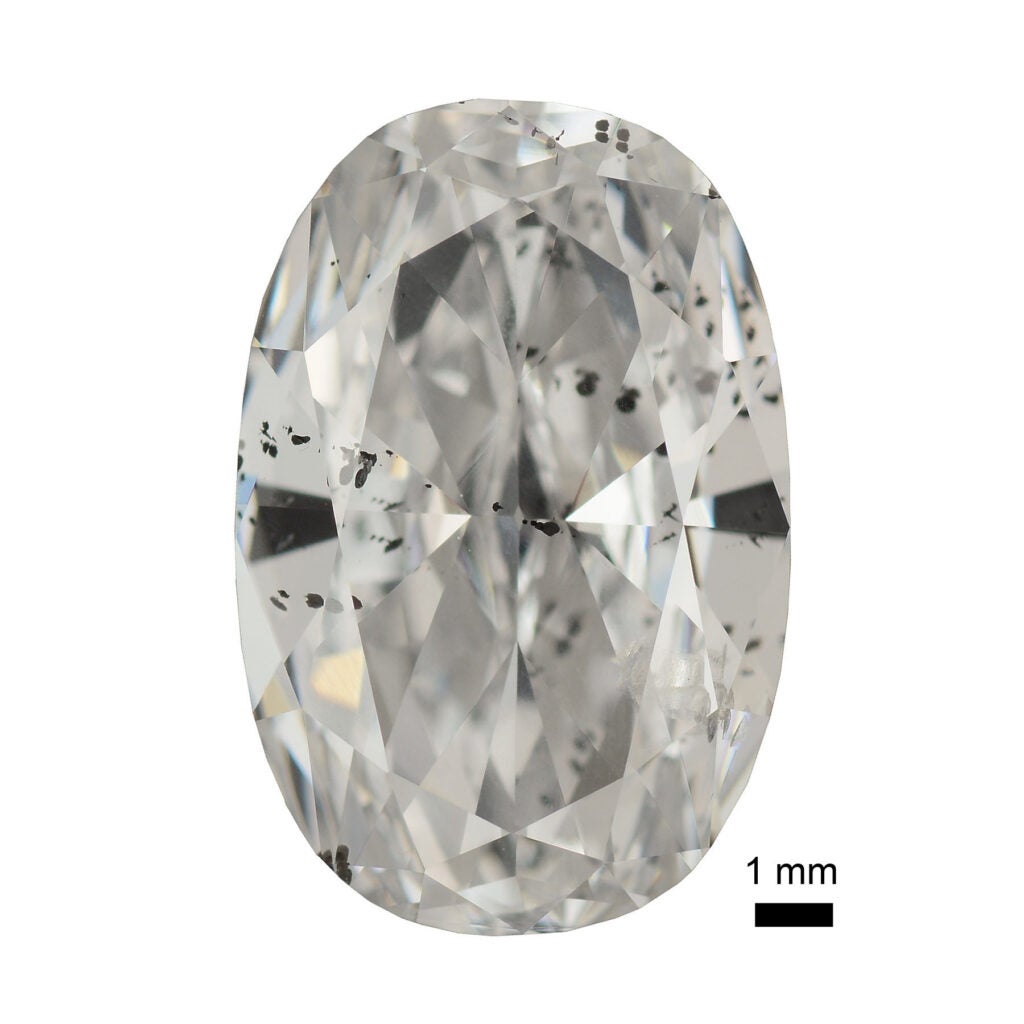 Inclusions are visible as tiny black specks in the cut diamond.

The diamonds grow in association with the liquid metal, which is incredibly good at dissolving carbon. When the metal gets too saturated with carbon, some of it starts to precipitate out and crystallize, building up over time into the large diamonds that we see today.

The origins of the carbon dissolved into the liquid metal are still in question. But one possibility, Smith says, is that the carbon originally came from the Earth’s crust, was drawn deep into the mantle at the edge of a continent where one tectonic plate was colliding with the other, and eventually made its way down into the mantle where it was dissolved by the liquid metal—and transformed at high temperature and pressure into some of the most prized diamonds in the world.

The large diamonds and hum-drum ‘normal’ diamonds all take the same route up to the surface: huge volcanic eruptions from deep within the Earth occasionally produce diamond-rich deposits called kimberlite, which is where most diamonds are found today.

Smith plans to continue to look for more inclusions and gather more clues as to the inner workings of the Earth. Unfortunately, some information has been lost forever. When some of the most famous large diamonds like the Cullinan were cut down into their current splendor, the metallic pieces that held some of the most valuable scientific information were cast aside as flaws, never to be seen again.

Smith hopes that in the future, those cuttings will be as prized as precious scientific specimens.