A whole new kind of ‘breaking up’ around the holidays 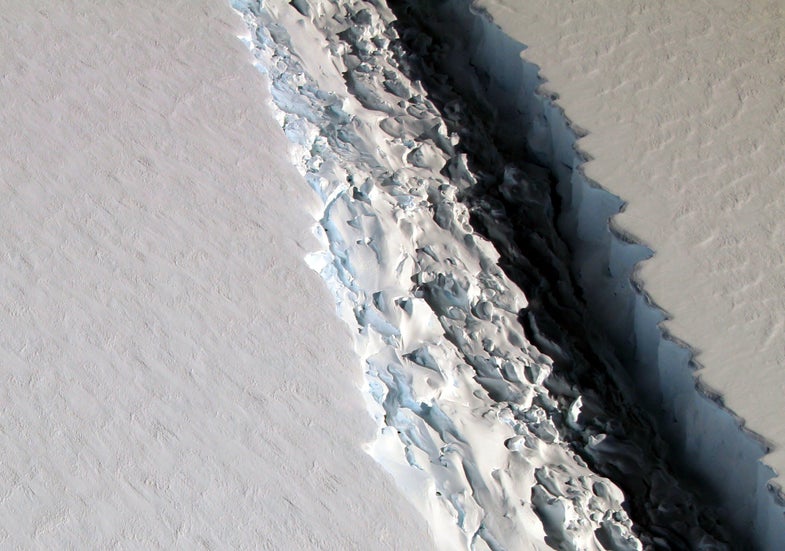 A rare ice crack not formed by that squirrel from the Ice Age movies. NASA/John Sonntag
SHARE

An iceberg the size of Delaware is starting to break away from Antarctica. It began with a small crack, but has now grown 70 miles long and more than 300 feet wide. When it reaches the edges of the ice sheet, the state-sized chunk will drift away into the sea.

The crack is a third of a mile deep—reaching all the way to the sea below. It’s a relatively new rift in the ice sheet, called Larsen C, but is following in its icy brethren’s footsteps: Larsen A and B both broke away from the main Antarctic sheet in the last two decades in much the same way. All three began with clefts in the ice and eventually floated away to disintegrate. That dramatic a cleft is unusual—it’s more common for ice sheets to slowly break up along the edges and fall in smaller chunks. Only in the last half century has it become common for the Antarctic to form these dramatic fault lines, and scientists say global warming is likely to blame.

A timelapse of Larsen B disintegrating, starting one year after it broke away.

NASA has been monitoring the Larsen ice sheets since Larsen A broke off in 1995. Larsen B followed it in 2002, and Larsen C is expected to go the same way soon. Operation IceBridge has surveyed the polar ice caps annually for the past eight years as a way to track changes in the glaciers and ice sheets. The MIDAS Project, a U.K.-based research group, first reported the Larsen C rift in 2014 and has kept a watchful eye on it ever since.

NASA will keep monitoring the crack along with other Antarctic research groups, though this year’s fly-over mission is already done. One of the IceBridge mission scientists at the Goddard Space Flight Center called it “possibly the best Antarctic campaign IceBridge has ever had,” saying that they had exceptionally good weather and better scientific instruments than ever before. The mission covered more area in their six week survey any previous year.

The more than 2,400 square miles that is likely to break away from Larsen C will only be about 12 percent of the ice sheet’s total area. But once that part comes loose, the MIDAS Project predicts that the rest of the sheet could become unstable and completely disintegrate. The crack is growing steadily and shows no signs of stopping, though the break won’t happen immediately. It takes much longer for ice sheets to break up—unlike many human relationships, this one will last through the holiday season.