A rise in studies on female bird behavior shows how gender equity can spark change in research. 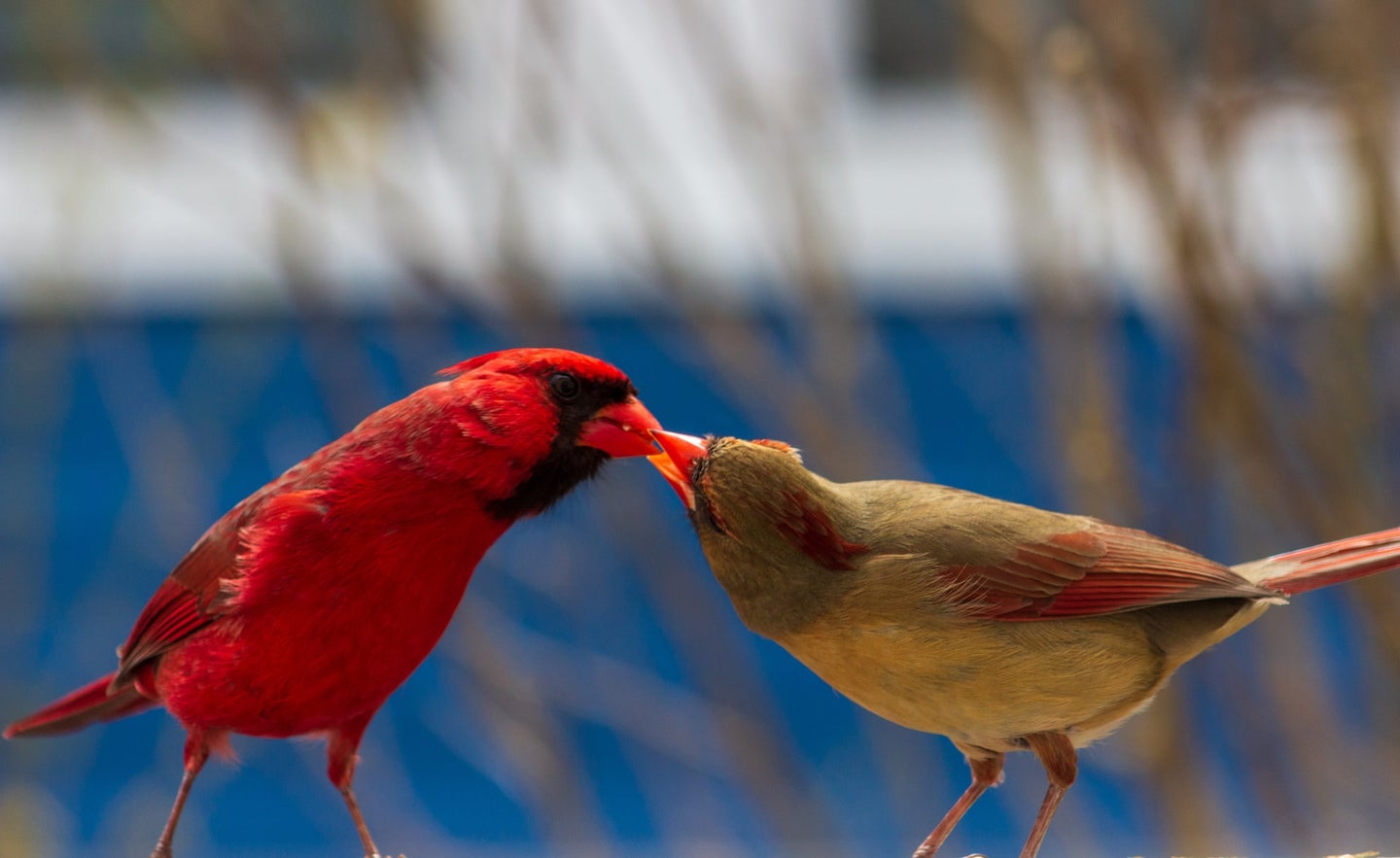 A male Northern cardinal (left) feeding a female. Closer research has shown that the female type of the species has distinctive songs patterns, too. Aaron Doucett/Unsplash
SHARE

Americans often idealize scientists as unbiased, objective observers. But scientists are affected by conscious and unconscious biases, just as people in other fields are. Studies of birds’ vocal behavior clearly show how research approaches can be affected by the people who do the work.

For more than 150 years, dating back at least to Charles Darwin’s writings on sexual selection, scientists have generally considered bird song to be a male trait. The widely accepted view was that bird songs are long complex vocalizations produced by males during the breeding season, whereas such vocalizations in females are generally rare or abnormal.

But over the past 20 years, research has shown that both males and females in many bird species sing, especially in the tropics. For example, our group has studied female song and male-female duets in Venezuelan troupials, a tropical species that sings year-round to defend territories. And we have studied female song in eastern bluebirds, a temperate species in which females sing to communicate with their mates during the breeding season.

In a recently published study, we reviewed 20 years of research on female bird song and found that the key people driving this recent paradigm shift were women. If fewer women had entered this field, we believe that it likely would have taken much longer to reach this new understanding of how bird song originally evolved. We see this example as a powerful demonstration of why it’s important to increase diversity in all fields of science.

Traditionally, white men working in countries of the Northern Hemisphere have conducted much of the research on bird song. Researchers in countries such as the US, Canada, England, and Germany have focused much of their work on migratory birds that breed in the north temperate zone.

But starting in the 1990s, new research began to contradict this view. Studies pointed out the bias toward temperate zones in previous work, and indicated that in the tropics, females of many species are prolific singers. Researchers began to study how female birds use their songs, how females learn songs, and why females in some species join their mates to sing precisely coordinated duets.

We noticed that women had written many of the key papers on female song published in recent years and wondered whether this was a general trend. To see whether women were significantly more likely to publish about female bird song than men, we identified all papers with “female song” in the title or abstract that had been published in the last 20 years. Next we assembled a set of papers generally published in the same journals in the same years, but focused on “bird song” more broadly.

For each of these papers we determined the genders of all authors, including the first author, middle authors and final author. Final authors frequently are the senior authors—for example, research group leaders.

Middle authors on female song papers were also slightly skewed toward women. However, last authors were much more commonly men for both female song and bird song papers. In other words, the team leaders on these projects were still more likely to be men.

For female song studies, 58 percent of last authors were men. In our view, although ornithology is now a relatively gender-balanced field, more women need to be promoted into senior leadership positions, so that they can lead key decisions on research directions, funding and student projects.

A major goal of our study was to recognize and promote the diverse perspectives of researchers with different backgrounds and identities. However, we felt it was crucial for our study to look back at least 20 years, since that was the time frame over which this key paradigm shift occurred. Many authors from that far back would be difficult to contact directly for a variety of reasons.

In the future, allowing authors to self-identify for studies of gender and authorship in a range of fields would likely produce more correct gender data and allow researchers to identify as nonbinary or non-gender-conforming.

Our case study on bird song provides dramatic evidence that who researchers are, where they are from and what experiences they have had influence the science that they do. More diverse groups of researchers may ask a broader range of questions, utilize more varied methods and tackle problems from a wider range of perspectives.

Gender is just one aspect of identity that could influence topics, conceptual approaches and specific methodologies used in a wide range of scientific disciplines. Many other factors, such as race, ethnicity, geographic location and socioeconomic standing, could also have important impacts on scientific research.

Recent events have vividly illustrated the effects of racial biases in areas ranging from criminal justice to outdoor recreation. Our study shows why it is important to address racial, gender, and other biases to improve the outcomes of research, teaching, and outreach at colleges and universities around the world.