Three love stories about birds that will delight your heart 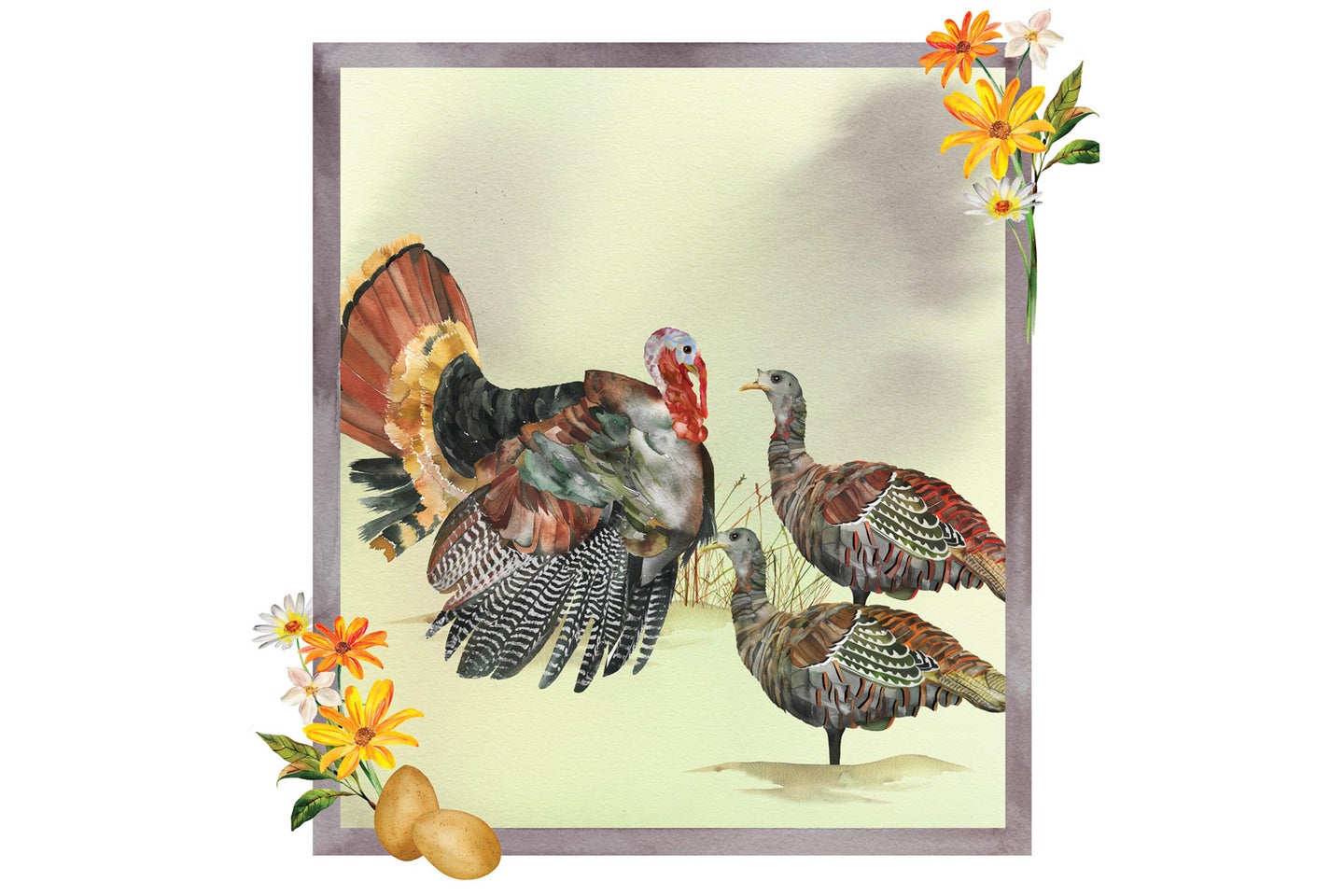 The main difference between mating wild turkeys and high schoolers is that, one day, most high schoolers grow up. Veronica B. Lilja/peppercookies.com
SHARE

Excerpted from The Love Lives of Birds: Courting and Mating Rituals © by Laura Erickson. Used with permission from Storey Publishing.

Sometimes we develop a crush on an attractive person who seems absolutely perfect right up until the first or second date, when the person reveals that what we thought was confidence and charisma was egotism and bullying.

Wild turkey toms never pretend to be anything but bullies, but when the cockiest male gobbles and struts in spring, flaunting his swollen snood and flashy, colorful face and neck, females flock to him like teenagers chasing a pop star. This may not sound sensible, but they’re not looking for a long-term relationship — just genetic material that may make their chicks as sturdy and strong as possible.

On the off-chance that another tom might have good genes, too, almost half of female turkeys hedge their bets, mating with a second or even a third male when the top tom isn’t paying attention. Female turkeys lay all their eggs (up to a dozen and a half) in one basket. Those precious nest contents represent a huge investment of time, energy, and physical resources. Females naturally want to ensure that at least some of those young survive and thrive.

Turkeys establish a literal pecking order within each sex, with the “Prom King” and “Prom Queen” types dominating the social scene in each flock. Female hierarchies tend to be fairly stable, but males are forever scrabbling to move higher on the hierarchical ladder. How successful a male is at fighting isn’t related to how often he fights. Some males never quit sparring with other males even as they lose most of their matches, while some excellent fighters stay in shape by avoiding fights unless pressed.

When a flock of males meets another during the breeding season, all the members join together as a team to fight the other flock. Like human football teams, these flocks are ranked, and females prefer to mate with the top tom on a winning team.

All that hormone-fueled drama dissipates by autumn. As the brilliant bare skin on males grows more subdued and their snoods are no longer swollen, they settle into fairly large flocks for the winter. Like most high school football teams, male flocks never include females; the boys show off to nearby females during the breeding season, but except during the actual mating game, males stick to their own kind.

Summer female flocks include male as well as female poults, but by summer’s end and autumn, as the young males outgrow their mothers, most of them gravitate to boys’ clubs. Fortunately, this happens right when the older males are taking a winter recess from all the drama and aggressiveness of high school social life.

Soon enough, spring comes. Once again, hormones surge, there’s a flurry of socializing, and even the calmest females will find themselves chasing one cocky heartthrob. The main difference between wild turkeys and high schoolers is that, one day, most high schoolers grow up.

In the final episode of the ’70s sitcom The Mary Tyler Moore Show, when the characters make their tearful farewell, they join in a group hug. When they need tissues from Mary’s desk, they stay in that tight huddle as they shuffle over.

The belted kingfisher, a loner from the moment it leaves its parents until it dies, grants a brief annual exception for a mate and chicks. Yet it’s the only bird who engages in group hugs and shuffles en masse from one spot to another, just like Mary’s newsroom gang. How? And why?

Kingfishers have exceptionally short legs and small, oddly shaped feet, the outer toes fused along most of the length. They can neither walk nor how—to move when they can’t fly, they shuffle. The weird foot shape is ideal for excavating a burrow in a sand bank. Kingfishers use their oversized bill to break up the soil and their thickened feet to shovel the dirt out the entrance.

In spring when kingfishers arrive on their breeding grounds, males establish their nesting territory. Courtship is practical and low key. If a female alights on a perch in a male’s territory and he’s interested, he’ll fly over with a fish. If she’s interested, she’ll shuffle toward him, and he’ll shuffle toward her. When they’re side by side, she takes the fish, and they mate.

After that, he’ll sometimes bring another fish to her, or he’ll perch with his catch and wait for her to come to him—either approach leads to sex. Sometimes when he spies her on a perch, he flies over and without his even offering a fish, they mate.

The male selects the spot in a bank where they’ll take turns excavating the nest. One works while the other calls from a nearby perch, maybe cheering its mate on, maybe offering “helpful” suggestions. They work mostly in the morning, stopping if it rains. They may not resume work for a week or more if the ground is too wet after a rainy spell. In fine weather, it may take just 3 days to finish the burrow, which extends up to 36 feet into the bank, ending in an earthy chamber.

The birds mate a few times each day as they excavate and then throughout egg laying, which may last another week or more. When the clutch of five to eight eggs is complete, they lose interest in sex, which doesn’t change their relationship much because they hadn’t seemed all that interested to begin with.

Both parents incubate, the female at night, and they virtually never leave the eggs unattended. After the chicks hatch, when a parent comes in to regurgitate a blob of partially digested fish, it feeds the chicks closest to it. They huddle together to stay warm and to ensure that no stragglers go unnoticed at feeding time. If one chick moves even a little in one direction, all the chicks in the huddle follow.

Every standoffish adult survived as a chick by this cuddling. Yet when it finally emerged from the nest cavity, shaking the dirt off its wings, it also shook off that friendly impulse for the rest of its life.

How long any animal successfully negotiates life is an indicator of overall fitness and gene quality, so in many species, the older an animal gets, the more attractive it becomes to the opposite sex. In some mammals and overproducing domestic birds, females grow less fertile with age, making maturity seem less alluring than youthfulness. In wild birds, however, the idea that “you’re not getting older; you’re getting better” is hardly an empty advertising slogan—it’s the way birds see it.

In many species, the older an animal gets, the more attractive it becomes to the opposite sex.

Some species give clear signals of increasing age. Cedar waxwings develop more red wing markings as they get older; hawks called accipiters start out with yellow eyes that grow orange and then deeper and deeper red with age. These birds have what scientists call assortative mating—they sort themselves out by age, older birds matched with older mates.

Eastern screech-owls also have assortative mating, but how they identify one another’s ages is still a mystery, at least for us humans. Young birds start seeking a mate their first winter, when most available birds are also young. But after an older screech owl dies, how does its surviving mate recognize, out of the smaller pool of potential mates, which birds are its age? Only the screech-owl knows for sure.

However they find each other, screech-owls usually stay together as long as they both live and, based on paternity tests of chicks, they are entirely faithful. Unlike most birds of prey, these couples don’t merely tolerate each other. They seem genuinely companionable even outside the breeding season, often roosting in the same hole even during warm spells when sharing body heat isn’t important.

The only time they never share the cavity is during the nesting period.

The female has all the responsibilities of producing and incubating the eggs as the male hunts for her and his offspring; he sleeps in another cavity for the duration.

To switch off aggression and signal cooperativeness and even friendliness, screech-owl pairs engage in allopreening, tenderly preening each other’s facial and head feathers; they also do this with their chicks. Allopreening, and making their trilling call back and forth, seem to cement the bond between mated birds, and both activities take place year-round, even when the birds are least interested in sex.

Other birds who mate for life, especially birds of prey, must rekindle their relationship with their mate each year, with display flights and other courtship activities. Building trust between birds who sport dangerous talons is imperative, but screech owls already know they can trust each other.

Courtship behaviors begin in January or February, when hormones intensify the owls’ calling and give it an amorous spin. On a night stroll in the winter woods, we may hear several making their long, plaintive trills.