Why is it snowing in Hawaii? 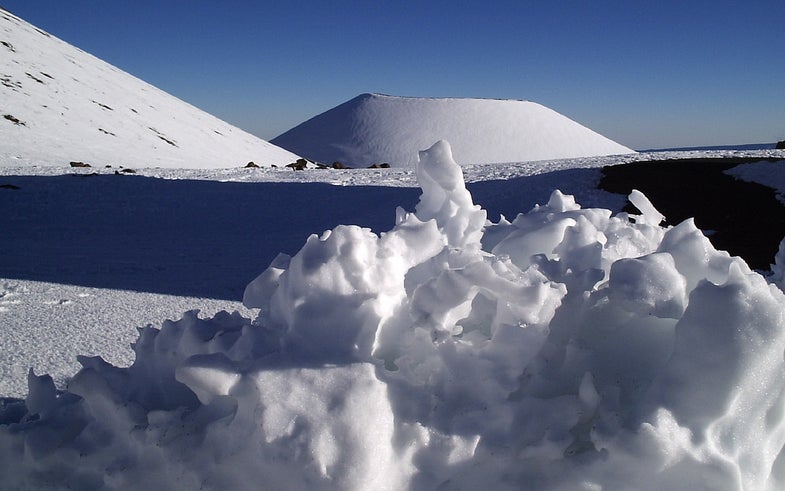 Some recent headlines might make it sound like huge snow dumps on Hawaii are a rare and unusual occurrence, but they’re just playing into your assumptions about how the cold stuff works.

If your mental image of Hawaii features flawless beaches, juicy pineapples, and simmering volcanoes, you might be wondering where flurries could possibly fit in. But it’s true: Hawaiians recently received several feet of snow. Because, well, duh.

Hawaii’s recent snowfall took place on summits like Mauna Kea—a volcano that peaks nearly 14,000 feet above sea level, home to some of the world’s most important telescopes. I took the above picture from Mauna Kea’s summit. See that guy’s jacket? It was late June, and at sunset on the summit we had to bundle up to protect ourselves from freezing temperatures. A few hours before, I’d been in a bikini and shorts. That billowy fluff you see above is cloud cover, not snow, but temperatures on Mauna Kea are frequently chilly enough to turn the island paradise into a winter wonderland. In fact, the volcano’s name translates to “white mountain,” because snow covers its peak several times a year.

“As long as we have deep enough clouds to support ice crystals, and when you have cold enough temperatures at the summit level, you can get snowfall,” Matthew Foster, a staff meteorologist with the weather service in Honolulu, told USA Today. Mauna Loa, another volcano on Big Island, is also tall enough to see frequent snow. The only other Hawaiian island that sees snowy action is Maui, which gets a dusting on its tallest summit every few years.

Snow in Hawaii! The summit of #MaunaKea dusted with snow and ice this morning #HawaiianSnow pic.twitter.com/v0IoocrKpT

What makes these mountaintops so cold? Air pressure drops as you climb higher and higher, because there’s less atmosphere above pushing down on you. This means the air spreads out and becomes less dense at higher altitudes. Because gas is always hotter when it’s dense—molecules are more likely to rub up against each other and produce friction—and because the sun doesn’t actually heat the air (in fact, the sun heats the ground, which then heats the air, and a mountain peak has nothing on the surface area of a big valley), this means mountains and other high points are much colder than nearby sea-level locations.

So can you ski on Hawaii? Yes, but the Hawaii Ski Club no longer recommends trying to ski on Mauna Kea. Because the area is reserved for scientific and spiritual purposes, there isn’t any upkeep of the “trails” going down the volcano. The Ski Club cautions that snow cover can be sparse and the trip downhill is often quite hazardous. And when a serious dump of powder hits the mountain, access roads are shut down for visitor safety – so unless you feel like risking your life (and probably annoying the heck out of some of the resident scientists), you should probably keep “skiing on Hawaii” off of your bucket list.

Having a snowball fight on Hawaii, on the other hand, is now one of my own personal life goals.