How to decode the secret language of birds 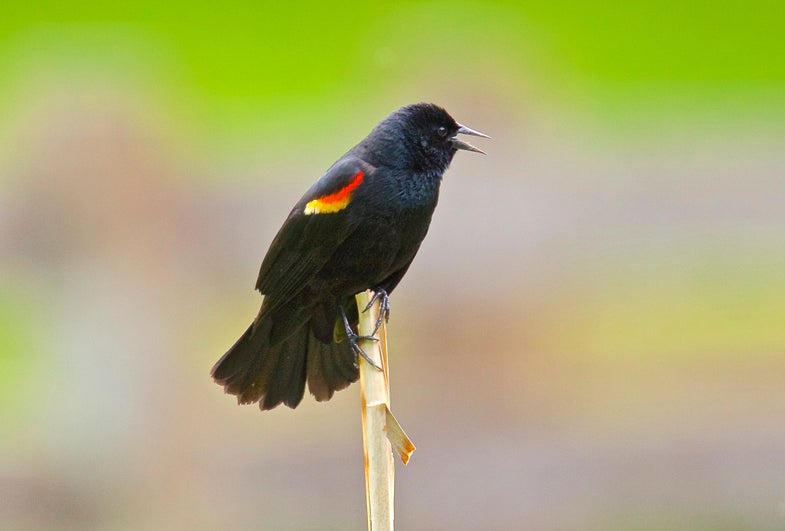 Both male and female red-winged blackbirds make a litany of calls. Can you learn them?. Jerry McFarland via Flickr
SHARE

A little bird once told me…well, a lot. That twittering song isn’t just the sound of relaxation, a sign of spring, or nature’s alarm clock. It’s a language that can convey valuable information to the trained ear—even when that ear belongs to a human.

With each real-world chirp, cheep, and melody, the bird is sending a potent message. It might be a male’s love poem, designed to woo a comely female, or a show of strength, warning other birds to back off. Often, that seemingly-carefree song serves as an alarm call indicating that a predator is on the prowl—or a human is lumbering down the trail ahead.

For millennia, wild critters have been listening in to these messages. And for good reason. When a robin sees a predator like a coyote, for example, it will sound the alarm—short low- and high-pitched shrieks—and other prey like squirrels will heed that warning.

But rodents aren’t the only mammals to interpret a conversation between birds. For centuries, Native Americans have relied on so-called “bird language” to learn the whereabouts of people and other animals that would otherwise remain invisible to the human eye.

“A lot of indigenous people have been using bird language to know where mega-predators are,” says Pinar Ateş Sinopoulos-Lloyd, co-founder of Queer Nature, who leads courses on bird language. “They are able to decipher how birds communicate and warn each other in the forest.”

Learning bird language isn’t just a strategy once used to survive. According to Heather Durham, a bird language expert at Wilderness Awareness School, it’s also a tool to establish a more intimate and enriching connection with nature.

“To notice and understand these sorts of dramas unfolding all around us at all times makes the world a far more interesting place,” she wrote in an email.

There’s no Rosetta Stone for bird language, but anyone with finely-tuned ears, keen observation skills, and plenty of patience can learn to translate songs into information.

Here’s a beginner’s guide to learning the avian alphabet.

Start by finding a comfortable place outside—it could be in your backyard, a nearby park, or even in your home by a window. Ideally, you’ll want to settle down in a diverse habitat that’s far from human disturbance, explained Jon Young in the seminal bird-language book What the Robin Knows.

“A spot with a good field of view and a meeting of habitats will yield a higher diversity of birds and animals to observe,” he wrote.

Once you find the right place, stick to it. The more time you spend in one location, the more familiar you’ll become with its inhabitants—which means you won’t have to start from scratch each time you go on a listening trip.

When you arrive at your perch, Durham says, sit still for at least 20 minutes. This gives the animals time to get used to your presence. To get started, she wrote, “Go out, sit down, and pay attention.”

Find common birds with a lot to say 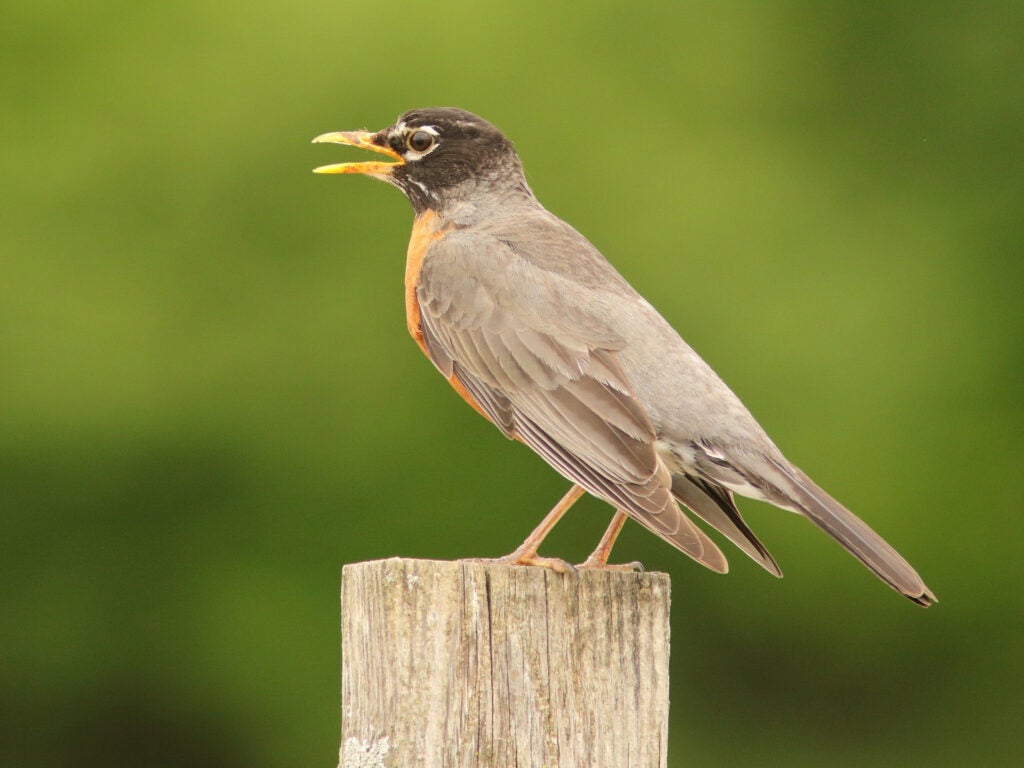 This common songbird is also easy to identify.

Now that you’re settled, look for common songbirds that forage or nest on the ground. They’re more likely to detect predators on the forest floor and, as a result, have much more to say, according to Young.

Young also recommends that you choose species that stick to the same, small territory year-round. That way, you’ll get to know birds in each season, noting how their behavior and calls change. (Males of many species, for example, exhibit a wider repertoire of calls in spring.)

Of course, not everyone is well-versed in the birds that fit all of these criteria. So Young listed a few birds that make great teaching subjects.

Once you narrow your focus to a species or two—such as a familiar robin or charismatic red cardinal—start paying attention to baseline vocalizations.

According to Young, these sounds fall into broad categories such as “song,” “companion calling,” and “aggression.” Though they won’t tell you much about threats, they’ll help you establish a baseline of birdcall for your area of observation. Eventually, this makes it much easier to detect alarm calls.

Distinguishing song is simple: Listen for rhythmic melodies, like those of the American robin. These are especially easy to pick out in the early morning during spring, when males are performing for prospective mates.

“You can get a clue as to whether a bird has found a mate by how much he’s singing,” says Kenn Kaufman, field editor at Audubon magazine and longtime birder. If you have trouble identifying any particular song, check out a digital bird guide like Audubon’s Guide to North American Birds. These typically feature songs as well as descriptions.

Deciphering companion calls, which mated pairs use to communicate, requires a bit more patience. First, you need to find a couple; Young suggests looking for song sparrows or cardinals. Then listen to how they talk to each other in a series of soft chirps. According to Wilderness Awareness School, you can think of companion calling as akin to murmuring to your spouse over a dinner table.

Similarly, to identify calls of aggression, you can look for a particular behavior, often a territorial display. During breeding season (which happens in spring for most species), keep your eyes peeled for a stand-off: Two male birds, poised at either side of the lawn, flapping their feathers and squawking as if to say, “Back off, this is my land.” They often compete like this because more territory means more resources, such as nesting sites and food.

Learning baseline calls will give you a glimpse into the world of songbirds and all its drama: who’s looking for love, who’s angry with whom, and who’s in a relationship. Once you do, it will be much easier to detect when something is amiss. 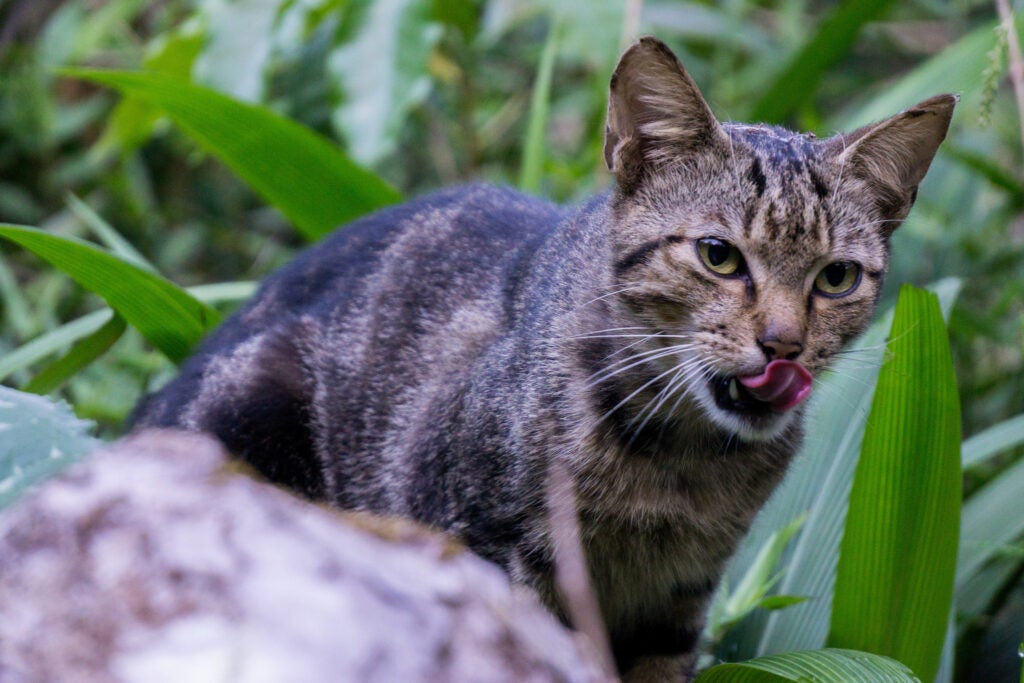 The face of a predator that just spotted its next feathery meal.

When birds detect a threat, be it a crash-diving kite or a slithering serpent, they sound the alarm. As naturalists are learning, Durham says, each warning call may encode specific information about the threat—down to the species of predator.

In her own backyard, she’s noticed that sparrows and towhees sound a different alarm for the “lazy well-fed cat who couldn’t be bothered to stalk anything” than for the “lean, scrappy feral cat who subsisted mainly on birds,” she says.

“The former would elicit a general announcement of lackadaisical chirps akin to ‘Just saying, that lazy cat’s around again,’” she says. “Whereas the latter was more like a shrieking ‘Fly for your lives!’”

Alarm calls require observation and patience to learn, but Young offers a few tips that quicken the process.

Pick up a field guide to figure out which predators lurk near your perch. Keep an eye out for these falcons, snakes, foxes, and other beasts. If you find one stalking prey, then watch it and listen to how birds respond.

You can also listen for specific sounds that most alarm calls share. “Often, they’re more harsh, unpleasant, or arresting than everyday bird calls,” Kaufman says. For example, listen to the alarm of an American robin. According to the Wilderness Awareness School, the noise itself can sound similar to companion calls, but far more agitated.

Not sure how to discern an agitated bird call from a calm one? We don’t blame you. You can also try running a simple experiment: Once you’re settled into your spot—and the birds have resumed their normal chatter—have a friend walk towards you from a few hundred yards away. As the human approaches, listen and take note of how the birds respond. You can also observe how birds react to other mammals, such as feral cats.

If all else fails—or if you want to get a headstart—check out this library of bird voices. Built to accompany Young’s book, the digital collection contains vocalizations of more than 15 common species, including Northern cardinals and American goldfinches.

Even with an audio archive, learning bird language requires patience. Each species is slightly different, Kaufman says, and learning their varied calls takes time. But it will be well worth your effort.

“We are often … a jarring, unaware presence in the world beyond the front door,” Young wrote. “If we’re in bird language mode, however, we’re moving with a whole different frame of mind and venturing into another realm of awareness and intention and curiosity.”

Durham would agree. For her, interpreting bird language “allows me to visibly and audibly measure and adjust my impact on the natural world,” she says. “If I’m distracted and not tuned in, all wildlife around me is going to be long gone before I even step foot into the forest.”