How a rainstorm killed 61,000 reindeer

Climate change will only make this more common 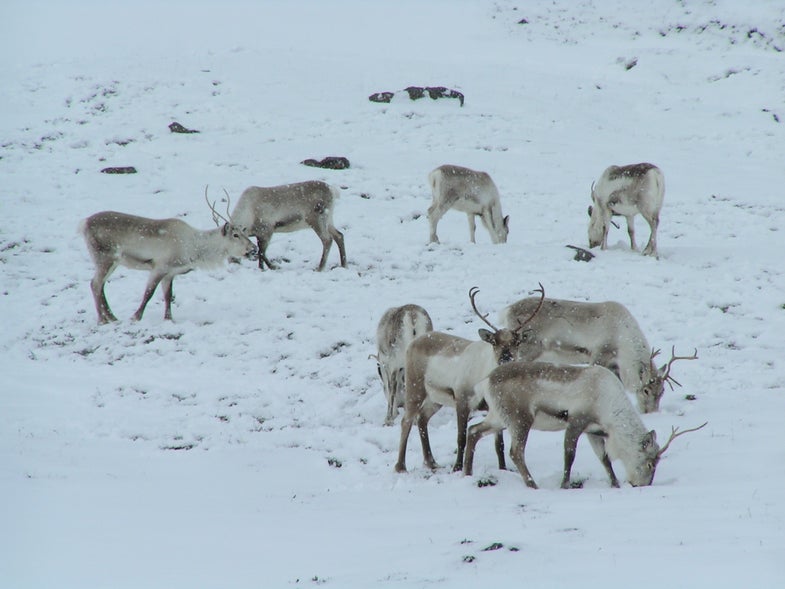 In 2013, 61,000 reindeer died of starvation on a remote peninsula in Siberia, upending the livelihoods of reindeer herders in the region.

The vegetation that the reindeer usually eat was staring them in the face, just beyond reach. Instead of resting under a blanket of soft snow, the reindeer’s food was encased in a solid layer of ice, the product of unseasonable rains that fell in November of that year.

In a study published in Biology Letters, researchers report a possible cause. In 2013, there was an unusually low level of sea ice in the Barents Sea (near the Yamal Peninsula where the deaths occurred). The interaction of the warmer waters coupled with unusually warm air over land caused a huge rainstorm. The rain fell on the softly driven snow, then froze as the temperatures dropped, creating an impenetrable block of ice that even reindeer hooves couldn’t get through.

For the researchers looking at the data, the satellites tell the story. By looking at different data from weather and climate satellites monitoring the region during the 2013 event, they can see exactly the conditions that caused the disaster. “We can see the wind blowing onshore just as the air is warming, just as the ice is retreating and just as the humidity is shooting up,” Bruce Forbes, an author of the paper says.

The reindeer were semi-domesticated, traveling in herds with the nomadic Nenets, an indigenous group that regularly takes their reindeer over 700 miles from summer grazing grounds to winter pastures. The Nenets rely on the reindeer for meat, fur, and transportation, with the reindeer dragging their possessions along the way. The herds form the economic backbone of the Nenets society. When tens of thousands of animals starved, it was not only a loss of life, but the loss of a way of life.

This dramatic event is unfortunately not an isolated incident. Similar starvations have happened about once a decade, most recently in 2006. But researchers worry that as global warming continues and sea ice disappears, these events might happen with more regularity. If there isn’t enough time for people to rebuild their herds between one freezing event and the next, the Nenets way of life could vanish forever.

There’s no way to stop the rains, but there may be ways to alleviate the devastation of future freezes. Local officials have discussed plans to reduce reindeer populations, so that the region doesn’t have more animals than it can support as the climate changes.

Another, more immediate solution would be to establish mobile slaughterhouses in the region, which could alleviate both economic and animal suffering in the event of another wave of starvation. In 2013, the ice came when the herds were still around 60-120 miles away from the nearest slaughterhouse, which meant that the animals starved slowly instead of dying quickly, and their corpses were burned instead of being used for meat and fur. “It was very grim to have all those animals slaughtered in slow motion,” Forbes says.

The mobile slaughterhouses would have another advantage too, potentially preventing the spread of anthrax in the region. The corpses of infected organisms from the last outbreak (in 1941) are releasing the pathogen into the landscape as they thaw, opening living animals up to infection. With the ability to quickly cull infected livestock using the mobile slaughterhouses, officials hope that the next outbreak might be more contained.