Yes, the oceans have been warming for the past 75 years 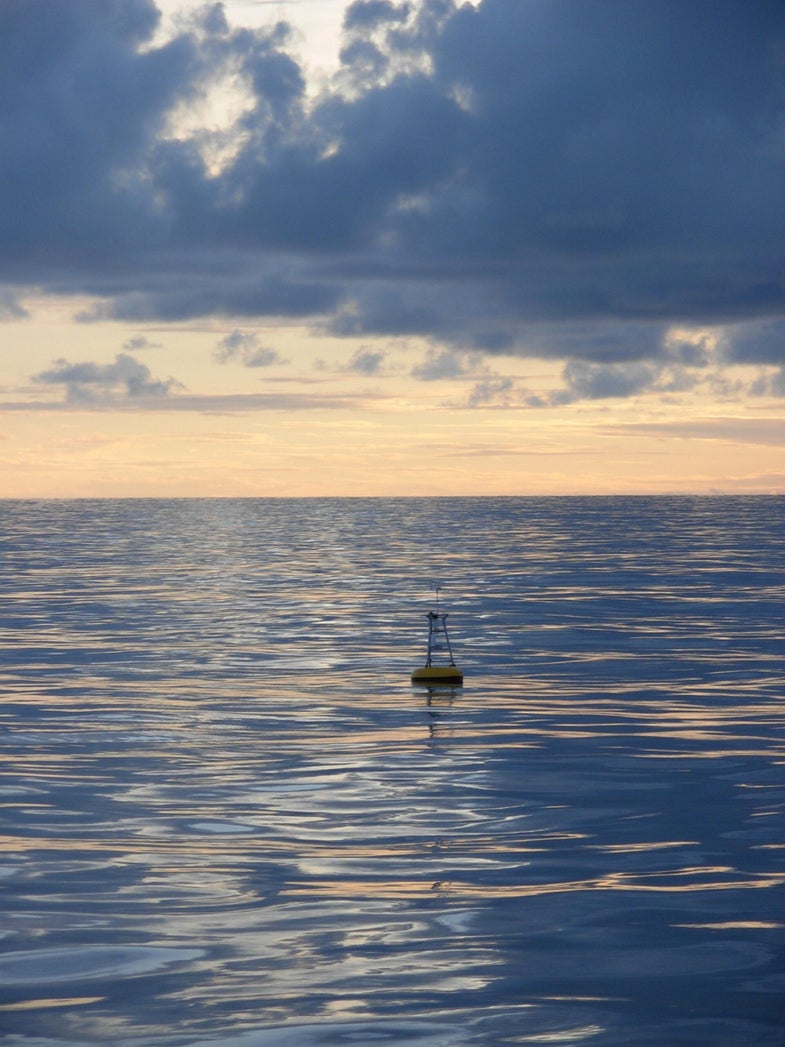 We just can’t get a break.

A study published Wednesday in Science Advances confirms once again that there was no global warming hiatus or cooling period during the past 20 years, an idea that had previously been raised in earlier assessments of sea surface temperature data.

This most recent paper sprang out of a noted study published in Science in 2015, which showed that global warming hadn’t stalled out, but was continuing apace.

“The 2015 paper was essentially NOAA releasing a new version of their global land ocean record,” says Zeke Hausfather, a graduate student at UC Berkeley and lead author of the new Science Advances paper. The land measurements stayed the same, but in the ocean the temperatures increased dramatically from past measurements.”They roughly doubled the amount of warming we had over the past fifteen years,” Hausfather says.

That essentially erased an apparent hiatus in warming within the climate record, and caused tempers to flare.

“A lot of people who were pretty invested in the idea of there being a pause, or who had a general distrust of NOAA, were very critical of the results,” Hausfather says. Lamar Smith, the chairman of the House Committee on Science, Space and Technology, accused NOAA of altering temperature data and subpoenaed the e-mails of NOAA employees in an effort to prove that the researchers were tampering research to fit their own biases.

“The aftermath of all that made us interested in looking into this. Both because we felt that NOAA got a lot of unfair criticism, and also because their new results did produce some real scientific uncertainties; not only is their new temperature record warmer than their old one, it’s also a bit warmer than the UK’s Hadley Center record, which is probably the most commonly used ocean temperature record,” Hausfather says.

Hausfather and his colleagues wanted to figure out what was driving the differences between the records. The records stretch back about 150 years, an amalgam of data from ships and buoys. But over that long span of time, the ways of measuring that data have changed dramatically, and differences in data collection mean that temperatures collected by ships in the early 20th century might be different from the data collected today. Hausfather separated out these different records and compared them with independent data from other sources, including satellites and robotic floats that also measured sea surface temperatures.

Since the 1850’s, ships from across the world have measured the ocean’s temperature during their voyages in an effort to quantify and study weather on the seas.

“Ships and ship captains have always been interested in the weather. It was a matter of life and death back in the day,” Hausfather says. They measured currents and took detailed notes in an effort to improve shipping and navigation, leaving us with a wealth of knowledge.

The only drawback is that those measurements were taken for the purpose of measuring the weather over a finite period of time, not creating a long-term climate record.

“People on ships in 1850 didn’t care much about the continuous 150 year record of climate,” Hausfather says. The temperature data they initially collected was from a wooden bucket of seawater hauled up to the ship’s deck and measured with a thermometer. That eventually progressed to measuring from canvas buckets, and then automatically measuring the temperature of the water as it was pumped into engine rooms to cool modern ships.

All those different methods yield slightly different results—especially the measurements on modern vessels, where the temperature in the engine room is warmer than the water being pulled in from the outside. Ships gave slightly warmer measurements than the high-tech floating buoys that started being deployed in the late 1990’s.

The late 1990’s and early 2000’s were also the start of the supposed ‘hiatus’. Researchers now attribute that plateau or pause to the difference between measurements from the warm ship’s intake and the cooler buoys.

“The way we generally look at temperatures is by looking at the change over time. If you go from having a warmer temperature because it’s in an engine room to a colder temperature, you’re suddenly going to have this jump down [in temperature]. If you look at the trend over time, that jump down is going to introduce a cooling bias,” Hausfather says.

That difference only accounts for some of the discrepancies in measurements between ships and buoys, which don’t run completely in parallel. 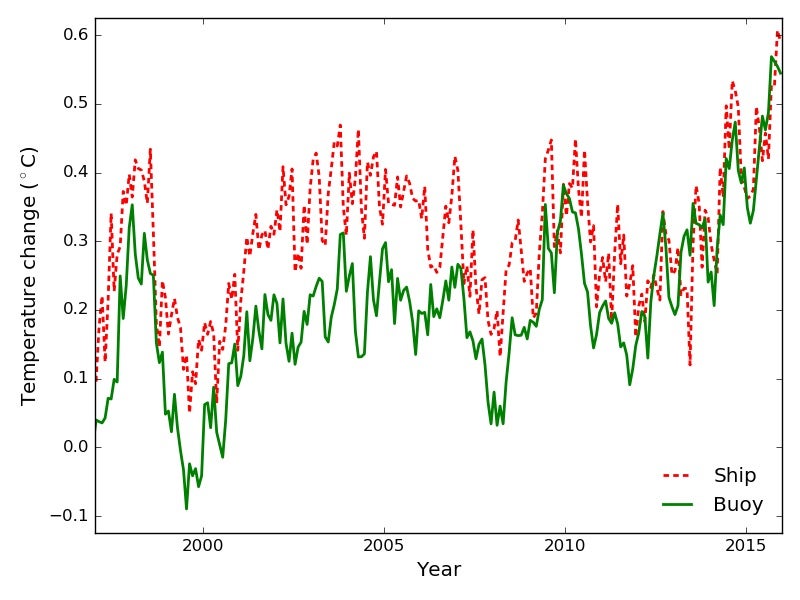 Sea surface temperatures recorded by both buoys and ships over the same time period.

Researchers still don’t know exactly what other differences between the ships and the buoys helped skew readings. But there have been significant changes to ships traveling around the world. In addition to larger ships moving more slowly across the ocean, hulls are also deeper today than they were in the past, shipping routes have diminished, and shipping lanes have shifted locations. All or some of those factors could have played into the difference between the readings, but the exact cause remains a mystery.

Today, NOAA has adjusted its records to give more weight to the buoys, which have a standard suite of data collecting instruments situated in locations all over the world—and therefore have far fewer variables than a changing shipping fleet.

“The big takeaway for me is that NOAA got it right,” Hausfather says. “They weren’t cooking the books, they weren’t manipulating the temperatures in response to political pressure, they were a bunch of hardworking scientists doing their best to work with messy data and understand what was going on.”

The work to further clarify the data collected in the past is ongoing. Hausfather and colleagues are now looking into records from the 1940’s, when much of the data gathered by ships was complicated by security concerns during the World Wars. Figuring out how those pieces of the past fit together could help us predict what our ever-warming future will be like.